How did Harry, Ron and Hermione buy presents for each other?

I have been re-reading the Harry Potter books again and I noticed that Harry, Ron and Hermione have been giving each other Christmas presents each year at Hogwarts. How have they been able to buy each other presents if they are not allowed to go out of Hogwarts?

From their third year on they could visit the village and buy presents there, but what about the first two years? Did they give their personal belongings? Or did they just happen to have boxes of chocolates or books to give each other?

There were a mixture of homemade and shop-bought items. The latter could've been ordered by owl.

Let's look at the presents which are given and received by the trio in the first two books.

I've ignored the non-gifts from the Dursleys, which I think shouldn't really count.

From this list we can see that quite a few of the gifts are homemade.

It was wrapped in thick brown paper and scrawled across it was To Harry, from Hagrid. Inside was a roughly cut wooden flute. Hagrid had obviously whittled it himself.
(Philosopher's Stone, Chapter 12, The Mirror of Erised).

Harry had torn open the parcel to find a thick, hand-knitted sweater in emerald green and a large box of homemade fudge.
(Philosopher's Stone, Chapter 12, The Mirror of Erised).

However, the homemade nature of some of the gifts certainly shouldn't imply that they were made because commercial alternatives weren't available. Hagrid and Mrs Weasley were more than capable of going to wizarding shops if they'd wanted to. They simply preferred the personal charm of homemade gifts.

As for the children, it's true to say that they couldn't have got the presents from Hogsmeade, since first- and second-years weren't permitted to go. It's highly unlikely though that they only gave unwanted items that they just happened to have lying around. The only possible exception is Flying with the Canons, which might conceivably be a second-hand book once owned by Ron. He doesn't come from a wealthy family, after all, so he probably didn't have a great deal of money available for presents. We also don't have a record of Ron buying Harry a present in year one, which again could imply limited means. It's possible that, knowing Harry's keen interest in Quidditch, Ron decided to give him one of his old books.

However, Hermione's presents were almost certainly shop-bought. It's unlikely that she would give Harry a second-hand quill. Additionally, Chocolate Frogs and Bertie Bott's Every Flavour Beans were commercially branded confectionary products. These weren't homemade imitations but mass-distributed household names. They had to be shop-bought by definition.

How could they get hold of the presents? I can think of a few options:

It's highly unlikely that the presents were bought at Hogwarts. Valorum has found a good prop from one of the movies which suggests that there was, in movie canon, a tuck shop where students could buy some snacks. However, this shop doesn't appear in the books at all. Whenever students need to buy something, in both the books and the movies, they use Diagon Alley or Hogsmeade. For example, when Harry and Ron need to buy copies of Advanced Potion-Making for Potions midway through the school year they didn't use a school shop but sent away for copies to be delivered by owl from Flourish and Blotts. There's no precedent for any student buying things at Hogwarts (except on the black market). I think we can rule out Hogwarts as a source for the presents.

In the films we learn that the school had a tuck shop, as evidenced by this poster that appeared (very briefly) on the Gryffindor Common Room noticeboard. I would imagine that as well as delicious...

...it probably also carried a line of inexpensive gift items that could be given out as Christmas presents. 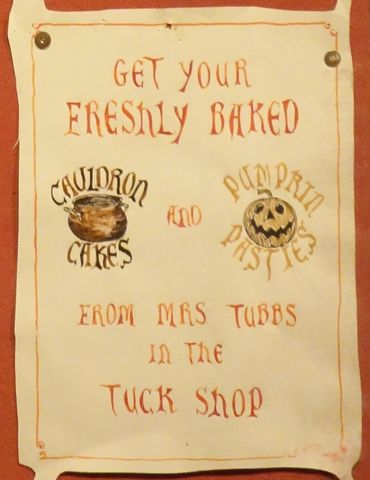 Image courtesy of HP: The Exhibition

Although it has never been fully revealed by JKR, but based on the reading AFA buying the presents is concerned, it could be done via mail/owl order. One can send the order and money via an owl and the present will be delivered to the person in concern. Sirius has done it (by sending mail order through Crookshanks) to send Firebolt to Harry and students used to purchase Fred/George stuff from WWW via mail order as well.

During Christmas/Easter and holiday season, the process seems a little more controlled as there are hundreds of students getting/exchanging thousands of presents during the festivals not to mention added number of presents sent by their families and friends outside Hogwarts. In this case, it seems like the presents are delivered to a central location, probably some storage location near Hogwarts owlery and from there, the house-elfs delivered the presents in the dead of the night making a pile of presents at their footsteps and everything for the students.

91
Why Did Gringotts Pay Out for Harry's Firebolt?
34
What was the first gift given by Harry Potter?
5
Within Hogwarts, where could you spend money?

8
How did Phineas Nigellus know that Hermione is a Muggle-born in the Deathly Hallows when he was blindfolded?
25
How did Hedwig know the Dursleys would have a Christmas present for Harry?
6
Did Harry, Hermione and Ron see Buckbeak die?
1
Why don't Harry, Ron, notice some of the "new" topics introduced in the later books?
31
When did J.K. Rowling decide to make Ron and Hermione a couple?
48
How did Ron get five hundred Chocolate Frog cards?
3
Harry Potter fanfic about Harry and Hermione dying and then going back in time to their first year selves
7
Why didn't Harry give Ron a Christmas present in their first year?