I have a vague memory of a story (I'm not sure of the length) that I must have read at least fifteen years ago, but beyond that I'm not sure. There's only one element of a more complicated plot that I can really remember.

The main character is being targeted by some enemy, who has hired at least one assassin to go after him, and probably more than one. The one I remember was a super-powerful assassin robot, who the villain located in some out-of-the way place (a backward planet where the robot had retired, perhaps). When the robot shows up to attack the protagonist, it turns out all the robot's weapons are nonfunctional. The robot knew this when it was hired, but it did not let on. Somebody (probably the hero) sneers at the villain that nobody would have left a working super-robot out in the middle of nowhere.

I think that later, as a result of its having been caught up in the story's plot, the robot later gets repaired and fights on the hero's side in a later confrontation, but I'm not sure.

So what was this?

This sounds very like Roadmarks by Roger Zelazny. It has a left behind robot that is now a potter which is tasked with killing the main character. As in your description the robot was left as it was broken. 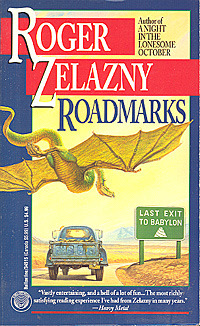 The novel postulates a road that travels through time, with a nexus placed every few years where a handful of specially gifted people are able to get on and off. While there is a plot involving a series of assassination attempts on the protagonist, the novel's main strengths lie in the unique nature of the setting, character development, structure and the short vignettes on each of the would-be assassins.

The robot is living under the name of Mondamay, but is indeed engineered for killing.

"I know that, here in your branch, a hypothesis which intelligent men find laughable in my own branch happens to be quite true: namely, that the Earth was visited long ago by creatures from another civilization, creatures who left various artifacts behind them. I know you are such an artifact. Is it not so?"

"I know, further, that you are a fantastically sophisticated death machine. You were designed to destroy anything from a single virus to an entire planet. Is that not correct?"

"You said that I am not the first such traveler you have encountered. I know this, for I know the other man's identity. His name is Red Dorakeen, and soon he will be seeking you on this branch. I have need of a very large sum of money, and I will be paid it for killing him. I always prefer working through intermediaries, however--human or mechanical--in matters of violence. You are to be my agent in this matter."

And, indeed, the weapons are not functional:

"Halt! Right there!" John spun and raised one hand, his eyes flashing. "If this is a trick, it won't work. And if it is not, I welcome the opportunity to kill that bird with this same stone. Mondamay! Burn Red Dorakeen down to a cinder!"

Mondamay raised his right arm, extruding a tube which he pointed at Red. Lights flashed in the vicinity of his shoulder. There came a crackling sound. A tiny wisp of smoke curled upward from out of the tube.

"It's been that way for thousands of years."

The only real difference is that Mondamay was already friends with Red before John showed up.

18
Time travel novel with dragons and an old truck

7
Forgot the title of the movie with a bad killer robot in a spaceship
10
60's or earlier SF short story robot learns to play piano
5
Book about a teenager programmed to be an assassin and trying to get back at the people responsible
12
Old short story where robot servant/assistant murders human being for lubricants?
10
What is the title of a story with a little girl alone on a generation ship with a robot?
6
Kids' novel with literal-minded robot son going to high school
13
Book identification: 1990s children's book with robot and credit card
8
I'm trying to identify a sci-fi graphic novel set underwater