Are the Adventure Time comics canon?

Is the Adventure Time comic from KaBOOM! canon with the television show? 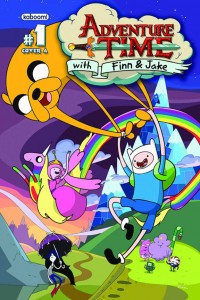 The initial outlines, final scripts, and finished comic pages all go to Pen for approval, and there’s certain scenes that we go back and forth on together. In Issue 4 (out now!), there’s a page (and you’ll know it when you see it) that actually took several drafts because we wanted to make sure it was perfect AND would fit in with not just with what’s been aired (the easy part) but also with what’s GOING to be aired a few seasons out (the harder part!).

(There was actually one detail that we changed just before the issue went to print, as the show writers had just come up with an awesome idea for an episode that would’ve contradicted this page in a minor way. The bottom line is this: we want everything to fit. We want the comic to be like an episode of the show, and for nothing to jar you out of that! ) THAT SAID, the show writers will always write the best show they can, just as I’m trying to write the best comic I can, and if they come up with something that’s awesome only it’s contradicts Issue 7 Page 5 Panel 2 of the comic… they’re still going to do it, and so they should!

So yeah, the comics are as canonical as possible, and we put a lot of work into making sure that everything fits! But future episodes might contradict something, and then we’ll say “Hey, they’re still canonical, but Abracadaniel spilled just some some magic on that one page of the comic and changed all our memories of it and that’s why it doesn’t make sense anymore!!”

tl;dr: a wizard did it

Not the answer you're looking for? Browse other questions tagged comics canon adventure-time or ask your own question.

1
Other sources of Adventure Time?