Young man discovers his home "world" is a spaceship

I hoping for some help here, as Google isn't being useful... In my early teens I read a novel about a young man who is quite adventurous in his society and in climbing and adventuring into the off-limit areas of his world, discovers his "world" is actually a giant spaceship (possibly an asteroid ship) transporting a colony to a new world and it is very near it's destination after hundred or thousands of years. Problem is that it has been so many generations now that no one even knows this is a ship any more, so he has to finish the journey himself, possibly with the help of an AI in the ship (sorry, memory is really foggy).

Biggest problem is that is about all the details I can remember... This would have been about the mid-1980's and in paperback.

This image by Roy Scarfo is what brought back my memory of the book, I am guessing the cover art of the novel was similar in some way. 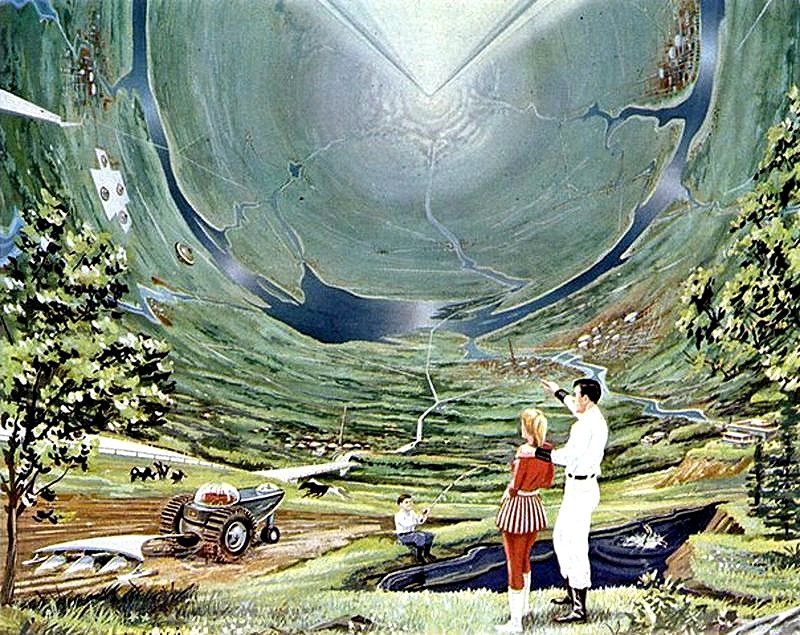 It's not an uncommon concept, and there are many stories that may fit it, but the simplest possibility that leaps to mind (being one of the earliest depictions of a generation ship) is Heinlein's Orphans of the Sky.

It was written in 1964, but it was a fairly common paperback in the 80s; that's when I first read it.

It could also be Phoenix Without Ashes by Harlan Ellison and Edward Bryant, the basis for the ill-fated TV show The Starlost. It was published in 1975.

They had banished Devon from the world of Cypress Corners because he dared to challenge the Elders. And when he defied them again, they hunted him like an animal. Then Devon stumbled on a secret passage in the hills. His whole life changed in that moment. For Devon had accidentally discovered the giant ark that was ferrying not only Cypress Corners but all other Earth cultures to another planet. What Devon did not know was that there had been a terrible accident aboard the spaceship. The gear hat been damaged, the crew dead. And the ark and all its worlds were now headed straight for destruction.

While you've already accepted an answer, Damon Knight's The World and Thorinn also fits (and is an obscure favorite of mine).

It follows a young boy named Thorinn, raised by what are essentially ogres in a world where the horizon curves up into the sky. After something happens to make their well go dry, they seal Thorinn (whose name means "flea" because his leg injury makes a hopping gait easiest for him) into the well both to try to solve the problem and as a sacrifice to the gods. Thorinn finds new and bizarre worlds as he descends deeper, and eventually learns that, as indicated, he's on a planet-sized space-ship being used to preserve the last vestiges of humanity. There is an A.I. in control of the planet, and they're actually rather keen on Thorinn because he's a descendant of the original programmers and therefore can give them orders.

The part that does not match is that, as far as I remember, they were not near any destination (and indeed, I'm not certain if the A.I. was still searching).

Another possibility is Harry Harrison's Captive Universe Where the passengers have an Aztec culture and live in a valley unaware they are on a ship, while the crew are behind the scenes, but they also have an imposed culture.

The story's protagonist, Jon, comes from a family which has been passing down a "heresy" from generation to generation. This heresy involves teaching the ability to read (considered taboo) and handing down the Letter and the Book, to be opened and read only in case of emergency. This emergency takes place at the beginning of the story when the cylindrical ship ceases its rotation, stopping the centripetal forces that emulated gravity and replacing them with an artificial gravity working in a different direction (thereby changing the direction of 'gravity' in every room in the ship). The ship's inhabitants also realise that instead of perpetually moving, like they used to, the stars not appear stationary.

In Simak's story, however, Jon and his wife Mary are very much happy and in love. When Jon has locked himself in the ship's control room in order to find a safe, habitable planet for the ship to land on, he is left without food, since everyone else on the ship has turned against him. Mary, however, risks her own life to bring him food and water, supporting and trusting him when no one else will. He is overjoyed when he sees her, relieved that she is safe and well. (I'm not even sure I've read the words "My darling wife" in a pulp sf story before). He teaches her about the ship and its true purpose and they spend the rest of the story together. I thought this was a much better portrayal of marriage than Heinlein's or Aldiss's.

It also could be "Non-Stop" by Brian W. Aldiss. The only difference from original question is that in "Non-Stop" the ship with colonizers was transporting from a destination back to earth.

On their journey, the group encounters other tribes of varying levels of sophistication. Complain is also briefly captured by humanoid 'Giants' of legend, who release him with no explanation. Complain's party eventually join the more sophisticated society of the 'Forwards'. Here, they learn that the space-craft is a multi-generational starship returning from the newly colonised planet of Procyon. In a previous generation, the ship's inhabitants had suffered from a pandemic because of an alien amino acid found in the waters of Procyon. Law and order began to collapse and knowledge of the ship and its purpose was eventually almost entirely lost throughout the vessel. It is now 23 generations that have passed since this 'Catastrophe'.

This also sounds a bit like Gene Wolfe's Book of the Long Sun, and your image really looks a lot like that Whorl: a cylindrical "world" where distant lands wrap around the sky, with a laser-like light source running down the middle. The "book" is actually a tetralogy; from a review of the final installment, Exodus from the Long Sun (emphasis mine):

The series is set in a generation starship, the Whorl, which has reached its destination, and is reaching the end of its ability to sustain life. The ship is a huge, hollowed out asteroid, which rotates to provide gravity. Down the axis of the ship runs the long sun, a kind of huge strip light with a rotating shade that provides night and day. At one end of the ship is Mainframe, the vast computer that controls the ship, and stores the personalities of its maker and his family.

The main character is a young man who does explore his world beyond his home neighborhood, and eventually has adventures that lead to the revelation that the Whorl is a ship and the rescue of the populace of the Whorl. He gets help from a friendly robot ("chem") as well as encountering the intelligence running the whole shebang in the city of Mainframe.

The cover of the two-book collection covering the first half of tetralogy, Litany of the Long Sun, looks a lot like your image: 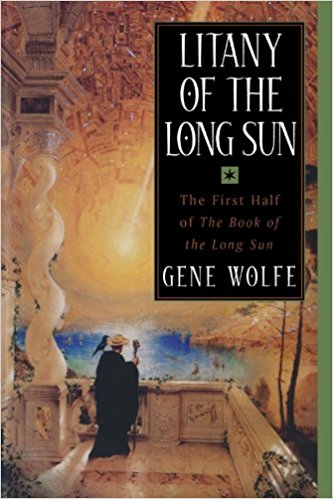 An image of the original artwork, without the title text and left-right reversed, looks even more like your "inspiration" painting.

Despite these similarities there are several caveats. First, of course, it's four books, not just one. Also, Long Sun was written in the 1990s, so later than you remember reading your book. Finally, there is a huge religious element to the story, plus a gang war, which are important elements that don't match your description. I therefore don't think it's exactly the same book you remember, but perhaps you read it (or just saw a cover/blurb) and it reminded you of the other book and you connected the two somewhat?

Not the answer you're looking for? Browse other questions tagged story-identification space-colonization generation-ship or ask your own question.

17
Book about a world of women where a man crash lands trying to find his way home?
12
Story about a man on a spaceship who plays music to earn his living in the ship
9
1950s era Los Angeles scientist invents memory erasing technique
5
The name of a SciFi story I read in 1980 about a sleeper person
7
Trying to find a book I read ages ago about telepathic aliens on a colony world
31
Book: World covered in trees that are miles high
15
Novel about an alternate history where there was no World War II, maybe involving time travel
16
SF puzzle story; crew of an experimental spaceship can't make it back home