He travels with an odd group to a factory where the baddies are making weapons. They hide in these animal shaped big statues on the garden grounds of this factory/castle thru trap doors.

That's all I can think of, the books are brilliant and I can't REMEMBER and it's driving me nuts. Think published between 2000-2012.

Found it. The Laws of Magic by Michael Pryor. Thanks for the advice guys - good to know for next time.

The first book is Blaze of Glory. 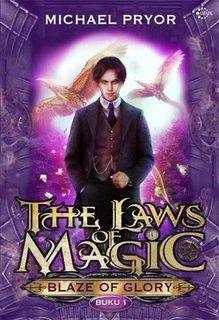 Aubrey Fitzwilliam is the son of a prominent ex-prime minister. He's also brilliant at magic, but he's stuck at military school. At least he has his best friend, George, there to back him up. George would follow Aubrey anywhere - and with Aubrey's talent for thinking up impulsive and daring schemes that will get them both in trouble, that's no easy thing to do.

At a weekend shooting party at Prince Albert's country estate, the boys find themselves in a hotbed of intrigue and politics. They discover a golem, a magical creature built to perform one task: to kill Prince Albert. Aubrey and George are hailed as heroes for foiling the attempt on the prince's life - but who sent the golem, and why? Aubrey is far too curious to let the authorities handle this one, and he and George start investigating.

5
Fantasy book series involving 3 magic stones
10
Help Identifying fantasy novel about magic red jewel
12
'The talking head' fantasy book with a girl on a quest with a severed head and a sassy crow
13
Fantasy novel with two dream-like worlds, one good and one bad
8
Strange book where teen protagonist is sent to a warzone, uses illusory magic to grow male genitalia
3
Name of a fantasy book where male character finds a magic absorbing artifact
5
Teen fantasy book series about a world where people who showed creativity could learn magic, and were killed for it