How did Loki escape?

Near the end of Thor: Ragnarok,

Loki is in Odin's treasury, and puts the crown from the beginning of the movie into the eternal flame in order to start Ragnarok.

However, later on we see him

on the ship with the remaining Asgardians, after Asgard has been destroyed.

How did he get there from where we last saw him?

In the final scenes when everyone is safely in space, you can see the smaller flyer that Loki used to fly to the castle stuck to the top of the larger freighter.

We can assume that Loki flew out after dumping the tiara into the fire. He may have also taken some other items from the vault with him when he left. 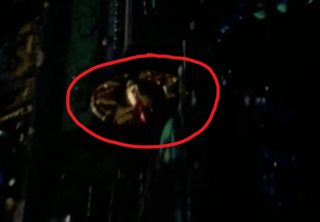 It seems at least possible that Loki

took the Tesseract from the vault after starting Ragnarok. As the Space Stone,

it would have the ability to transport Loki out of harm's way. We noticed Loki eyeing it up suggestively on his way in, and the mid-credits scene shows

The fleeing Asgardians being loomed over by a ship that looks like those loyal to Thanos. It is quite possible that they are there seeking the Tesseract.

Of course, the evidence is still circumstantial until Infinity War comes out, but these events are at least reasonable especially since Marvel will want to tie Thor into that crossover.

22
Did Loki steal the Tesseract, again?
7
What happened to Odin's treasures after Ragnarok destroyed Asgard?
7
Did Odin know how the events of Ragnarok were going to turn out?
8
Why does Loki take the Tesseract?
4
What happened to Thor's shoulder wound in "Thor: Ragnarok"?
13
Why did Hela need Heimdal's sword?
10
Whereabouts of Odin's spear, Gungnir, after the events of Thor: Ragnarok
14
Why couldn't Hela defeat Surtur?
6
Why did Loki lie to Thor that Odin was dead?