Of late, I have decided to start asking here all the various science fiction and fantasy questions that have puzzled me over the years. Today, I have a fireworks identification question.

I know this sounds silly, but bear with me here.

About twenty years ago, I came home from college for a few weeks in the summer. My younger brother informed that, for Independence Day, they had bought a small firework with a picture of a guild steersman from Dune on it. I was incredulous, so he showed it to me. It was a large firework, the kind you set on the ground, and it shoots sparks in the air, like several Roman candles tied together and run on a single fuse. On the side of the packaging, it featured a large angry alien, facing out at the viewer and tearing up some skyscrapers.

"Huh," I said. "That does look kind of like the guild in Barlowe's Guide to Extraterrestrials.

"No," my brother said, "it looks exactly like it."

So we pulled out Barlowe's Guide. 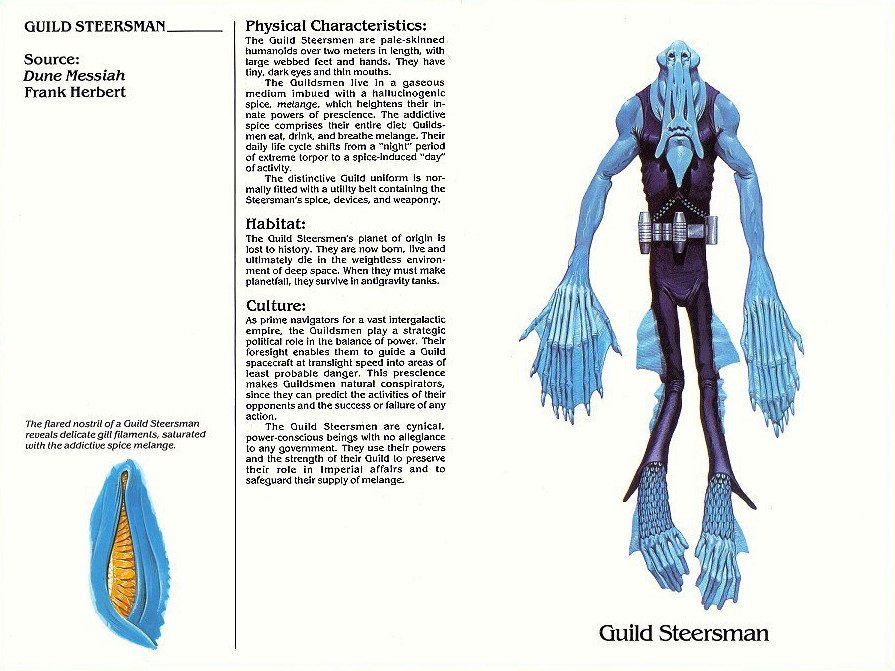 I remember the alien's skin color as not being quite the same (less blue, more gray, I think), and the fingers were more like tentacles tearing apart the nearby buildings. However, the shape of the face really was exactly the same. Whoever had drawn the firework packaging had clearly copied from the book.

I wanted to show this image to somebody else recently, but I could not find it online. I think the name of the firework was actually "Rocky Mountain High," but that is unfortunately a pretty common brand name for fireworks (...I've seen it raining fire in the sky...). I have not been able to locate this via Google. So I'm wondering where I could find an image of this, and, moreover, if there's any information out there about how a giant guild steersman came to be attacking Colorado Springs.

Browse other questions tagged object-identification art or ask your own question.

8
Picture of a decapitated Egyptian robot's head with wires coming out of its neck
7
Book about a world of elfin-like creatures with bumps on their foreheads
13
Trying to find old short story about mysterious picture drawing device
4
What was written in the book Sam was reading with the Valyrian steel dagger?
8
What is the bio-hazard with an eye symbol on Moody's pocket watch?
6
What is the nature of Luke's scanner used to track and find R2-D2?
6
Was the illustration of the "Primordial One" in the AD&D Deities and Demigods based on the one from Barlowe's Guide to Extraterrestrials?