What was the first alien species on Earth in Doctor Who?

My question is relatively simple. I would like to know what the first alien species to make its way to Earth is in the recorded and unrecorded history of Doctor Who.

The first aliens to appear on the show were the Gallifreyans, the Doctor and his granddaughter Susan, in the first episode.

Assuming, however, that you mean the earliest in Earth's history, that would probably be Scaroth, the last of the Jagaroth, from "City of Death." The explosion of Scaroth's (cool-looking spherical) ship led to the creation of the first life on Earth.

EDIT: And since the question no longer excludes the Racnoss (as it did originally), then the answer is (of course) the Racnoss, since the whole planet coalesced around them originally.

I suggest that the answer is the Racnoss. They arrived as the solar system was forming and their ship became the nucleus about which the Earth formed. And in spite of that, the Empress survived until she met the Doctor and Donna.

In the 2006 Christmas Special The Runaway Bride, the Doctor takes Donna back to the time when the earth was forming, and showed her that it was a Racnoss spaceship that formed the core around which the Earth formed.

DOCTOR: We've gone back four point six billion years. There's no solar system, not yet. Only dust and rocks and gas. That's the Sun, over there. Brand new. Just beginning to burn.

DOCTOR: All around us in the dust.

(A large rock drifts past.)

DONNA: I think that's the Isle of Wight.

DOCTOR: Eventually, gravity takes hold. Say, one big rock, heavier than the others, starts to pull other rocks towards it. All the dust and gas and elements get pulled in. Everything, piling in until you get

DOCTOR: But the question is, what was that first rock? (A seven pointed star spaceship comes out of the dust cloud.)

Though Time Lord or Gallifreyan would be technically correct.

If you take the term "alien" with more of a cultural than literal definition, the Silurans were probably the first non-human sentient life to live on Earth. 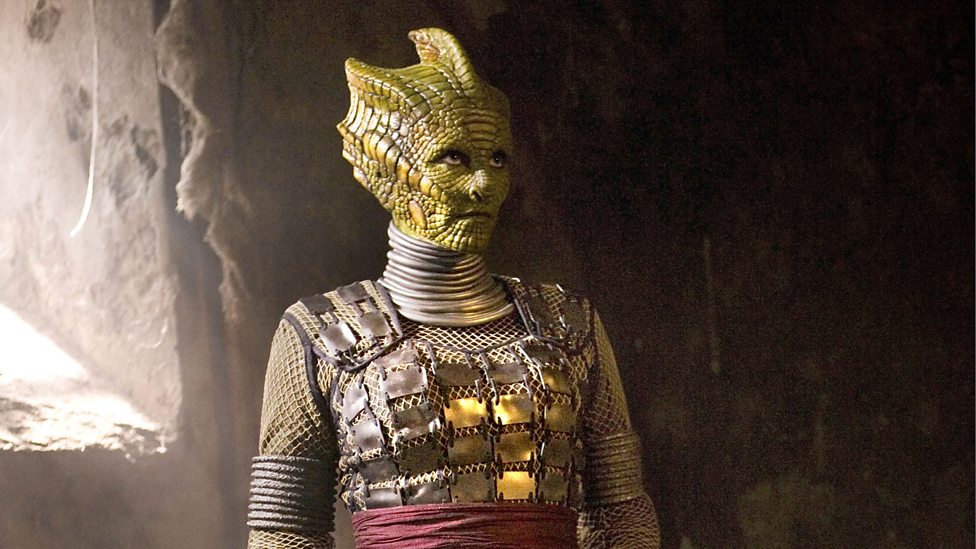 They were around far far before humans, hiding underground in hibernation to avoid the near cataclysmic event that ended up being the capturing of our moon.

In a literal sense, the Silurians are not aliens, because they appear to be native to earth. But they would seem alien to any human who encountered them. After all, they are green.

Not the answer you're looking for? Browse other questions tagged doctor-who aliens or ask your own question.

2
What was the first alien species (not Time Lords, broadcast order) on Earth in Doctor Who?

17
When was The Doctor born?
4
Who was the first full-blooded alien to join Starfleet and be assigned to a spaceship?
14
Footage used in “The Magician's Apprentice” episode of Doctor Who
10
Title of 2 books about 2 different alien species who are fighting for earth
14
In Doctor Who, does the general public know about aliens?
9
What was that alien in Doctor Who that nobody saw?
2
What was the first alien species (not Time Lords, broadcast order) on Earth in Doctor Who?
1
In Doctor Who - “The Woman Who Fell to Earth” why didn't the Doctor know she was now a woman?