Why does Drax call them Harbulary batteries?

In Guardians of the Galaxy 2, Rocket steals some shiny batteries called Anulax batteries. 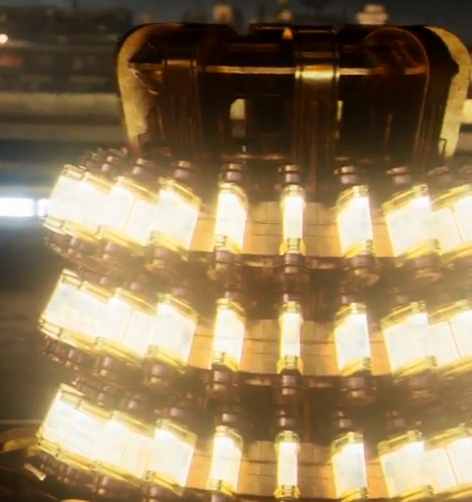 But Drax insists they are called Harbulary batteries. The pronunciation isn't even close.

Drax: What are they called again?

Gamora: Peter, we almost died because of your arrogance.

Peter: More like because he stole the Anulax batteries!

Why does Drax think they are called Harbulary batteries, and how is it that he gets the name so wrong yet so specific?

The junior novel indicates that this is simply his best attempt to repeat what Peter is saying.

TL;DR: Drax called them Harbulary batteries to hint that the Soul Stone's power is within the batteries. The Soul Stone is within the Hive in the Sovereign. Everything I have said is completely backed up with film evidence as well as support from comic book story lines.

Long story, short: This involves much more than Drax being stupid, although 99% of fans will mark it off as that and forget about it. The real explanation behind Drax calling them "Harbulary" batteries is that the writers were slyly hinting that the batteries derive their power from the final Infinity Stone: the Soul Stone... Think about it. GotG2 starts off with the Guardians defeating a very powerful enemy from another dimension who is coming after the batteries. Why would a being from ANOTHER DIMNESION come to the Sovereign just for some batteries unless they were extremely powerful, and well-known throughout all dimensions. I am assuming only the Infinity Stones would be capable of attracting such a beast... High Priestess hired the Guardians because she knows that they can already handle a powerful enemy with an Infinity Stone (Ronan)

The Sovereign is a society that artificially births their inhabitants in a Hive looking thing. Their newest creation, Adam Warlock of course.... Now I know James Gunn has said Adam Warlock will not appear in Infinty War, but he never ruled out THE SOVEREIGN being in Infinity War. Adam could just easily still be in his cocoon when Thanos comes to steal the stone.

Also, is it not fishy that Rocket killed Ego with ease with a makeshift bomb he made using just TWO batteries??? In GotG1 he created a missile that could "blow up moons," and yet he hit Ronan with it point blank and Ronan didn't even get scratched. It would make sense for those batteries to contain the power of the SOUL STONE (destroying souls, capturing souls within the gem, absorbing souls, etc..)... Ego was one of THE OLDEST MOST OG celestial in the universe and yet his whole existence was ended with a makeshift bomb made by Rocket????????? I am not buying it unless those batteries possessed the power of the Soul Stone...This would also explain why Ayesha was so pissed at the Guardians for stealing the batteries.

6
Will Quasar and Adam Warlock appear in the Guardians of the Galaxy movie?
16
Is it known what the markings mean on Drax The Destroyer's body?
15
Did the original Drax have trouble with metaphors?
13
Who were the other Ravager captains?
12
Is there music in space?
7
Is this supposed to be a Little Prince reference by Ego?
1
What prevented Ego from saving himself?
62
Where are Drax's nipples?
23
Has Drax in fact mastered the ability to stand so still that he becomes invisible?