Seeking story about an animated zombie that appears to be intelligent

I am trying to remember a fantasy short story, which I think I read in a magazine in the late 1980s or 1990s. The main character was a female warrior, leader of a squad of troops. They were on some kind of mission in a jungle, and I think I remember the main character complaining about the leather outfits they had to wear to protect themselves from natural hazards. (I think there was a color illustration of her, dressed all in black leather.)

Somehow, she ends up on her own and is confronted with an animated zombie, which seems to be intelligent. In this world, zombies are comparatively commonplace magic, but they have no cognitive abilities. This zombie claims to be her enemy. It almost convinces her, but eventually it turns out that it's actually just a mindless animation, being controlled by her second in command, who wants to replace her.

Inspired by the answer I gave to this question, I decided to look through my collection of Dragon issues, and I found the story I was asking about. It's "Desperate Acts," by Gordon Linzner.

Here's the illustration that went with it: 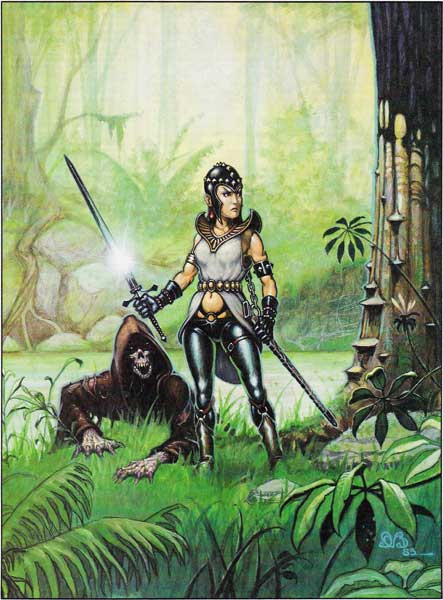 7
Trying to remember the title of a zombie novel
19
Book series about a future where gene-modified sentient animals were used as soldiers and are trying to find a place in post-war human society
12
Seeking a children's story about living in a horrible "intelligent" house
15
Novel featuring a baseball bat and a talking duck
6
Short Story (Scifi?) about a whale that "appears" in a boy's bathtub
5
Webcomic: a zombie which uses a mask to live a normal life
6
Looking for an older maybe 20 year old Mech Anime
22
Computer Game - Opens with meeting a famous person and chasing a robber who vanishes using magic
7
Alien movie about black stones biting people