What does “Ilvermorny” mean?

I searched a lot on the Internet for the meaning of "Ilvermorny", including Pottermore, but I couldn't find anything other than wild theories like this. :( Now, I admit that "Hogwarts" doesn't seem to have a "meaning" either, but usually JK Rowling follows a naming convention that signifies some characteristics of each character. (Sirius is the "dog star", Remus Lupin... well, Romulus and Remus - the wolf twins who founded Rome + lupus - Latin for "wolf", etc.) Doesn't the same apply to the names of buildings/institutes?

While we're at it, I have never quite figured out why Durmstrang and Beauxbatons are called what they are either. Well, I heard Beauxbatons would literally translate to "beautiful sticks/wands", but that just seems too silly for a name...

In-universe, it’s after the cottage Isolt grew up in.

The reason Isolt chose the name in-universe was after the cottage where she grew up in Ireland. No explanation is given to why the original cottage was named Ilvermorny.

James even helped Isolt construct a stone house on the top of Greylock, providing a workable design, having been a stonemason in England, which Isolt made a reality in the space of an afternoon. Isolt christened her new home ‘Ilvermorny’ after the cottage in which she had been born, and which Gormlaith had destroyed.
Ilvermorny (Pottermore)

No out-of-universe meaning has yet been mentioned.

There’s no place in Ireland (or anywhere else) named “Ilvermorny” that would justify a cottage, and by extension the school, being named it. It doesn’t seem to be based on a real word or phrase in any language. It’s possible that a meaning may be revealed at some point, or there may be no specific intended meaning.

Like mentioned in this Reddit thread, a name Gaelic would be hard for most English-speaking people, who wouldn’t have experience with it, to pronounce. If is is indeed in Gaelic, it’s likely an Anglicized version of whatever words it’s based on, and not spelled the same way.

It’s possible that it’s from the French words for “dreary green island”.

“Île Verte Morne” in French translates to something like “dreary green island”. “Île” means “island”, “vert” means “green”, and “morne” means something like “dreary or bleak”. This would certainly fit the original cottage, which is in Ireland, and because of Gormlaith, its end was bleak. Ireland is known as the Emerald Isle because of its green scenery and it being an island, so a name referring to a green island would suit a place there.

It’s also possible that it’s supposed to mean “green island hill” in French, using a translation of “morne” where it means “hill”. It being translated as “hill” is used in place names, and there’s also a mountain range in Ireland named the Mourne Mountains.

Both places in Ireland referred to in the Ilvermorny writing are real places, with Carrauntoohil, the highest mountain in Ireland situated between them. The name meaning “green island hill” would then make sense, as “green island” still could refer to Ireland, and the cottage was near a hill (the mountain close by). 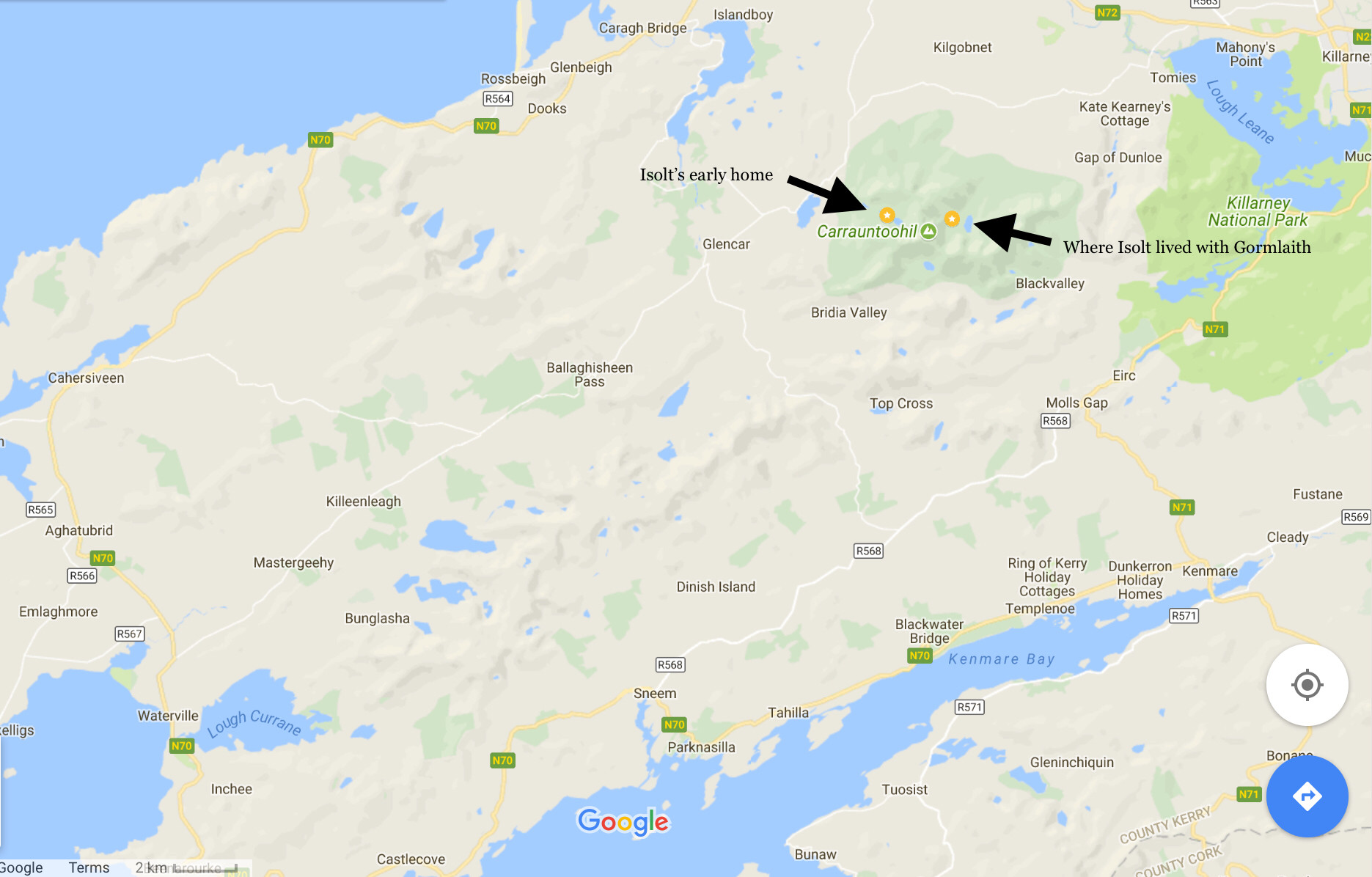 This does fit the JKR style of naming, since she has been known to uses phrases in French to form the basis of names. For example, Voldemort is likely from the French phrase for “flight from death”. “Vol” means either “flight” or “theft”, “de” most likely means either “from” or “of”, and “mort” means “death” - suited for a man whose goal was immortality.

Durmstrang is wordplay on the phrase “sturm und drang”.

The phrase means “storm and stress” when translated literally, and is commonly used to describe either turmoil or a German literary movement where works are generally about one person’s rebellion against society.

Beauxbatons is just the French words for “beautiful sticks”.

Beauxbatons is made up of two words - “beaux” meaning “beautiful” and “batons” meaning “sticks”. Baton is also a synonym for wand.

not a meaning exactly, but I found the following on Pottermore

James even helped Isolt construct a stone house on the top of Greylock, providing a workable design, having been a stonemason in England, which Isolt made a reality in the space of an afternoon. Isolt christened her new home ‘Ilvermorny’ after the cottage in which she had been born, and which Gormlaith had destroyed.

So, I am a first language speaker of Irish, and I am studying the language and its literature and history as part of my course, and this is the best I can do with undoing the Anglicisation of "Ilvermorny", which, as @Bellatrix has mentioned already, is not a name that already exists in Ireland.

(trust me, it actually does sound like 'Ilvermorny' when said out loud).

It's kind of cute, I guess, because Oirbheart means, among other things, 'casting (of a spell)', and Muirneach, as an adjective, means ‘passionate, heartfelt or tender’. So, Ilvermorny/ Oirbheart Muirneach means (at a kind of stretch) "tenderly cast spell", which in my opinion fits into the canon of William and Ríonach Sayre deciding to help the Muggles in their area with magic.

Okay, so here goes my headcanon:

The Irish branch of the Gaunt family (ending at this point with Gormlaith and Ríonach) came to Ireland either because of feuds with the English Gaunts/other pure-blood families/etc. They had been in Ireland for a couple of generations at least, considering the Gormlaith and Ríonach's names (fun fact; Ríonach means 'a royal', and Gormlaith means 'Blue Princess' - very fancy names for SLytherin's descendants), and in my opinion, these two Gaunt sisters are most definitely bilingual - English and Irish.

HOWEVER, William Sayre is not an Irish Gaelic name. Rather, it's an Irish name that has been Anglicised. In terms of Irish history, that means that William Sayre, Isolt Sayre's father, is from a family that was transitioning from being Irish-speaking to English-speaking. In my opinion, William is probably the grandchild of the couple that made the change to speak English, which means that he probably cannot speak Irish, or at least not well.

HERE'S THE CUTE BIT; when William and Ríonach came back from Hogwarts, decided to get married and name their house, Ríonach most likely came up with the name "Oirbheart Muirneach", and then William tried to say it like an English-speaker of Irish heritage would say it, and ended up saying something like "Ilvermorny". Ríonach, laughing at him most likely, decided to keep it that way, and that inside-family-joke eventually became the name of the most democratic school in the whole wizarding world.

Not the answer you're looking for? Browse other questions tagged harry-potter names fantastic-beasts or ask your own question.

24
Was Hogwarts named such because of a connection to warthogs?
10
Why do the new non-English wizarding schools have such unimaginative names?
3
Why did JK Rowling choose the name 'Hogwarts'?

22
What does “master of death” mean?
3
What Does the Title “Ama” Mean in Wicked?
4
What does “Turambar” mean?
5
What does “Diaval” mean?
8
Are Ilvermorny and the Salem Witches Institute supposed to be the same school?
9
What did Grindelwald mean when he said this?
14
Are the Ilvermorny houses based on the Hogwarts houses?
4
Are American witches and wizards forbidden to use magic before Ilvermorny?
24
What does Eru Ilúvatar's name mean?