Is there a set limit on mutant abilities, where they're deemed too unrealistic?

In the X-Men universe, as a sampling, we have:

And many other types of mutations (Rogue, Iceman, Pyro, and so on).

Has there ever been a set limitation, where an ability has been deemed too unrealistic to be caused by mutation?

And the related opposite (which I feel like is only relevant if the answer to the above is "no"), has a reason ever been given in-universe for why mutants have such a varied array of powers, some of them as powerful as they are?

I'd prefer one that applies to most/all mutants; I vaguely know Jean Grey is as powerful as she is due to a link to a cosmic entity known as the Phoenix Force - but as far as I know, that wouldn't apply to any of the other above examples.

This question is partially inspired by this answer to Is there a difference between Marvel and DC Comics' philosophy?

No. Using the basic premise that mutants were caused by the experimentation on the human genome by the god-like and mysterious beings known as the Celestials, first upon the Deviants, then the Eternals, and finally Humanity and the Inhumans, there has always been an implied arms races to create the most powerful reality-altering life-form possible for an unknown purpose.**

Currently, this title belongs to the mutant offspring of famed mutates, Reed and Susan Richards, of Fantastic Four fame. Franklin Richards, whose powers defy description (rumored to be Celestial level) and is, until otherwise de-throned, the most powerful mutant to have ever lived. Franklin Richards is an Omega-Level mutant with vast reality-manipulating and psionic powers.

What are mutants being made for?

What are the Celestials looking for? They never say. They never admit to why they performed the experimentation that links the human genome and the possibility for mutant capability. The only things we know for certain:

Their next experiments, the Eternals, were far more successful in certain respects:

Mutants, a sub-group of Homo Sapiens Sapiens, has shown both a diverse range of powers and a scale of power previously unseen in either Deviants or Eternals. In addition:

These powers are inconsistently scattered among the human populace and has on more than one occasion been potentially capable of destroying the entire species.

The Celestials have made at least three trips to study the results of their experiments, and only with the aid of the beings posing as gods, were they repelled when they decided to end their experimentation on Earth. (Thor, Vol 1. #300, 1980) 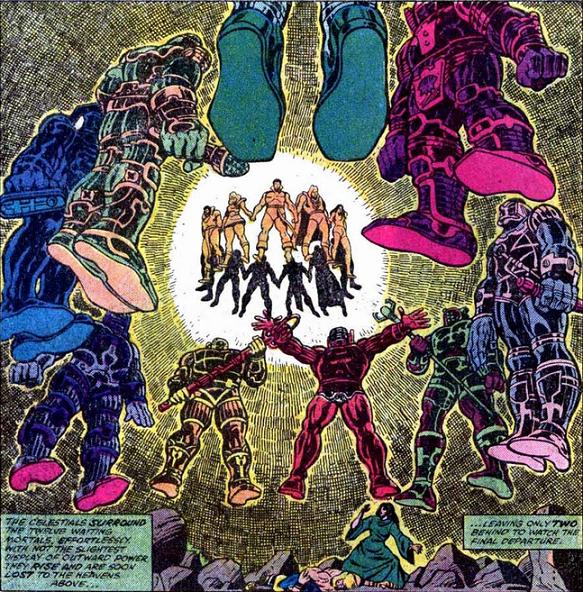 For the record, Odin and the other Sky-Fathers were unable to repel the Celestials, despite their preparations. It was the Earth Mothers who offered up twelve genetically perfect humans (see Young Gods) which caused the Celestials to leave the Earth. (Yaaaah, Mom!)

Since that visit, M-day has destroyed 90+% of all mutant abilities, Franklin Richards and Hope Summers have also been born, potentially two of the most powerful mutants to have ever existed. What this means for humanity and their future relationship to the Celestials is anyone's guess.

The Marvel Universe has been since the Bronze Age of comics (1970-1985) in an arms race of "cooler" mutant creation. The Celestial story line culminating in Thor #300 allowed them to flesh out the "gods of Earth" explaining them as beings living in symbiosis with Humanity, explaining why the Destroyer was created, and how mutants, Deviants and Eternals came to be.

It is unlikely that all of these things were planned, since all of these stories had come into being separately by the great writers of earlier eras. The awesomeness of Thor #300 was the weaving of all of these separate elements into a cohesive story that would carry Marvel forward and retroactively bind these disparate elements together.

I think Marvel had, for the longest time, never considered what the numbers of mutants would do to their world, especially if you considered mutation along a population curve. Unless humans started killing them, the world would literally be swarming with mutants.

If they all contained powers equal to groups like the X-men, then Magneto would ultimately be proven right. Humanity would end up on the scrap pile replaced by our physically, psychically, mentally, and eventually technologically superior offspring.

M-day wasn't an accident. For Marvel to continue, it was an inevitability.

Nope, there are no limits. From the most ridiculous power, gaseous form as noted, to the most extreme. Proteus could alter time and space at his will, in exiles comics he sought to also be able to cross through dimensions. He was the first one to be seen to have such unlimited powers. Even Krakoa the living island was just a huge mutant but not even in comparison with what power set Proteus had. After that, many have followed, including in general in the Omega level mutants category: mutants with powers of cosmic scale. so came Mickhail Rasputin (brother of Colossus) with energy absorbing and redirection power. They have leveled up the scarlet witch to extreme powers. Jaime Braddock (elder brother of Psylocke) had the ability to pull and shape the strings of reality. Nathan summers (Cable) that his powers were turned down cause of the technovirus in him (in a saga the virus is gone and Cable goes Godlike powers, he is in risk of his life getting sooooo powerful so he downgrades himself again). Franklin Richards (son of Mister Fantastic and the Invisible Woman) has had Celestial level powers since being a little kid. And sooo many others. Even Jean Grey is Omega level on her own, Phoenix Force wouldn't choose a random host, it craves for power.

So NO limits at all. Choose a set of powers and just pump it on a little teenager and wonders will happen.

No there is no set limits on what is unrealistic here is my main example.

Powers: exists as an astral intelligence housed in a shapeless gas form, keeps himself in a containment suit that approximates human proportions for him

Notes: - Dummy’s gaseous form was fully released when his special containment suit was pierced by flying glass during the riot at Xavier’s depicted in New X-Men #137. He has yet to re-form and is presumed dead or dissipated beyond return.

The guy apparently mutated into a gas. Which is not a mutation at all. It's ridiculous. Also as far as limits on power ranges as noted above the Scarlet Witch can alter reality and she's actually been considered a B list mutant for most of her existence.

To my knowledge it has never been stated why there are such wide variations of powers in the Marvel Universe. I don't believe it ever would be either as other questions asked on here show that the writers in general believe it cripples their artistic ability to have to explain in detail how powers work. They will give a brief explanation and throw in some pseudo-science but that's it.

Not the answer you're looking for? Browse other questions tagged marvel x-men powers mutant or ask your own question.

6
Source of the X-Men's mutations?
15
Is there a difference between Marvel and DC Comics' philosophy?
8
Why are X-Men more realistic than Fantastic Four?
8
Why does Magneto not exhaust himself? Where does he get his energy from?
10
Is Earth the only planet with mutants?
7
Why do mutants get their specific powers?
4
Is there an internal reason for Mutants being disproportionately European-descended and/or American populations?
9
Has X-Men ever offered an in-universe explanation for how the "impossible" arises from a biological explanation?