Can anyone explain what the Grandmaster's expressions following this line are supposed to mean?

In Thor: Ragnarok, the Grandmaster explains that time behaves differently on Sakaar somehow. We know that Loki has been on Sakaar for weeks when he was separated from Thor in the Bifrost only a few seconds before Thor was forced out of the Bifrost himself. Grandmaster says

Instead of finishing the sentence he delivers a string of inscrutable, awkward expressions that appear to make Loki uncomfortable.

Can anyone explain what these expressions might mean? Do they offer any insight to how that sentence was supposed to be completed?

Jeff Goldblum's Grandmaster in Thor: Ragnarok is attempting to appear harmless and eccentric. Add a little flirting and it becomes awkward and disquieting. Notice Loki's reaction to it. He looks frightened, not interested. 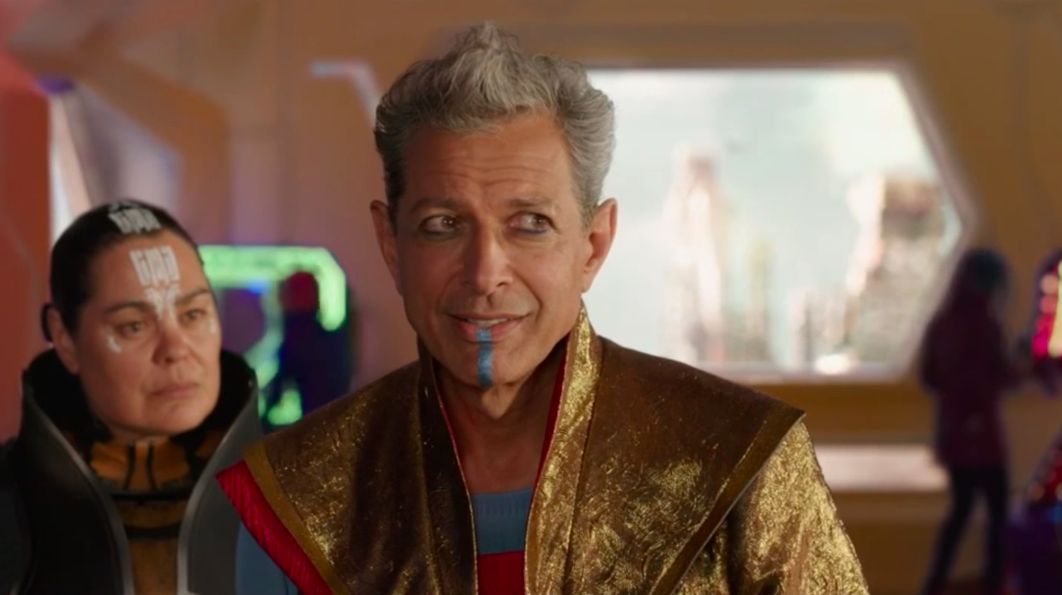 Everything the Grandmaster does is part of his act, to disguise just how old and powerful he actually is. This presumes the character shares the same basic origin story as the original.

If so, it makes perfectly good sense to use a show of force paying security teams and bounty hunters to give the illusion he is just a rich and indulgent warlord, not a multi-million year old entity who is probably cheating his customers out of money by using his heightened intelligence to steal their hard-earned money.

Was the opening line. What conclusion makes this sentence reasonable?

This is a much more reasonable expectation from someone who has been alive for millions of years and is intending to stay that way. All of the Elders of the Universe are equally obsessed with their own individual avocation. They spend their time in pursuit of their particular interest.

"Time works real different around these parts. On any other world I'd be millions of years old, but here on Sakaar where time barely moves at all, I'm immortal and forever young," may have been where the Grandmaster was headed. But the he decided against it.

As to the idea the Grandmaster is making eyes at Loki? It's technically possible, given his vast age, he may be pan-sexual and since Loki is technically a different species, he may be exotically interesting to the Grandmaster, but this would be an MCU conceit since the comic version of the character has no interest in sex or any other such carnal delights outside of his pathological need to win his games.

I think Jeff Goldblum is trying to convey the vanity of the Grandmaster, and possibly also flirting with Loki, which would explain the awkward expression on Loki's face.

According to the draft script for the film, the Grandmaster (ever the narcissist) is simply admiring his own youthful good looks and expecting those around him to do the same

Grandmaster: On any other world, I’d be like, millions of years old. But here on Sakaar..

[Grandmaster beholds himself. Then turns to Loki. A truly uncomfortable silence.]

I thought he was waiting for the others to interject and say that he doesn't look that old but no one did that, which made the bit even funnier.

Just watched Thor: Ragnarok for the third time last night, and it appears that he might just simply be reluctant to state his actual age, and the look to Loki might have been him trying to get someone else to state it to avoid embarrassment. Personally, I thought that Loki might have simply been made uncomfortable by this, as it could upset the Grandmaster.

My interpretation of the scene is that it is first and foremost a gag, and the brilliance of the performance is that the expressions don't really lead you anywhere. It's funny and interesting because it subverts your expectation that someone will trail off when an answer is obvious, but in this instance, the setup doesn't imply anything meaningful. The premise is that age is unreckonable there, so it's unlikely that he's trying to figure it out, but he's also not really fishing for compliments, using innuendo, being bashful about giving his real age, or even seeming to expect anyone to understand what he's trying to say.

In other words, I think it's inscrutable because it's supposed to be to set up an ironic gag.

My interpretation is this is just another example of the Grandmaster's eccentricity. It reminds me of a dialogue in the novel The Light Fantastic:

"Sort of mad. But mad with lots of money."

"Ah, then he can't be mad. I've been around; if a man hash lotsh of money he'sh just ecshentric."

The wealthy and powerful are surrounded by people who admire them, fear them, or want a piece of the action. That means people like the Grandmaster are surrounded by people who either suck up to him, or cut him a lot of slack - this means he can march to the beat of his own drum, and blatantly ignore social conventions (thus making him seem eccentric), and do things such as not finishing sentences to the satisfaction of others. The humour is in both the deliverer's mannerisms, and the recipient's reactions (Loki seemed accommodating yet exasperated - like a parent of a tantrum monster, Thor seemed equal parts perplexed and distressed).

Another example of this eccentric self-indulgence, is in the scene directly before, where Thor states that he's going back to Asgard: Grandmaster notes "Ass-gard", chuckles to himself, and cuts the conversation off abruptly to play the keyboard.

That said, I think other people's explanation about dodging his real age question is equally valid - and I had not realised this interpretation myself, since I saw the Grandmaster's trailing-off less as a question, and more as part of the overarching comedy of the movie.

This trailing-off is my favourite scene from the movie - followed by the Wonka chair nervous breakdown, and scenes involving Korg - and I have rewatched it countless times. It's an example of offbeat humour, which is sorely missing in mainstream blockbusters today.

The movie has a wide scope of humour, from off-beat (e.g. Grandmaster), deadpan (e.g. Topaz, Korg), meta (e.g. the theatre production, Korg about Thor's hammer), immature (e.g. "Get help"), to foil/straight man double acts (e.g. Topaz vs Valkyrie, Hulk vs Thor, Grandmaster vs everyone), and it's a joy looking for all of them during rewatches. I look forward to seeing more of Waititi and Goldblum's comedic genius.

15
Why wasn't Loki imprisoned on Sakaar like all the other slaves?
17
Does time move faster on Sakaar?