How many times has Mjolnir been broken?

When looking for an answer to a different question, I came across this comic panel, showing the Hulk grabbing and shattering Thor's hammer: 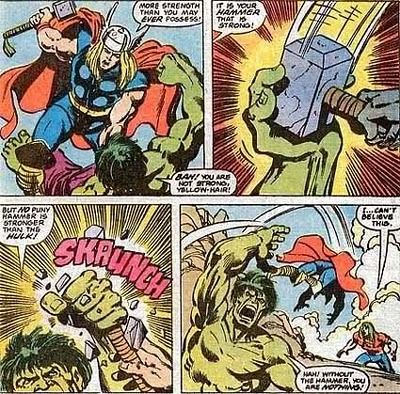 How many times has Thor's hammer been destroyed?

Mjolnir has been destroyed a total of six times in the comics.

The panel you have listed comes from Incredible Hulk #227 and is a dream sequence and so is not counted as an actual breaking event. (Thanks to @RDFozz in the comments)

Although an incredibly powerful weapon, Mjolnir is not indestructible. It has been damaged several times over the years:

52
How does Mjolnir determine 'worth'?
9
What kind of pathfinding system does Mjolnir use?
15
Canonically, can Mjölnir be lifted by brute strength?
7
Has Galactus ever been depicted attempting to lift Mjolnir?
6
You can't wield Mjolnir unless you're worthy, but has anyone ever stopped Thor from wielding it?
3
What is the force that enables Mjolnir to return to the hand of Thor