How do facehuggers attach to alien species without a graspable orifice?

We are aware from the films that the Xenomorph "lifestyle" involves finding an alien species, impregnating them and reproducing inside their bodies. However, facehuggers seem to be designed with a humanoid head in mind. Clearly facehuggers are well adapted to depositing the embryo inside creatures with an orifice that is easy to grasp on, but it's possible to conceive of alien species without an accessible orifice, or whose orifices are sufficiently surrounded by their bodies that the tentacles of the facehugger would be unable to find purchase. Is there any in universe explanation of how a facehugger migtht deal with such a species?

We can draw some conclusions from the first movie, specifically how the facehugger deals with a human in a space suit: 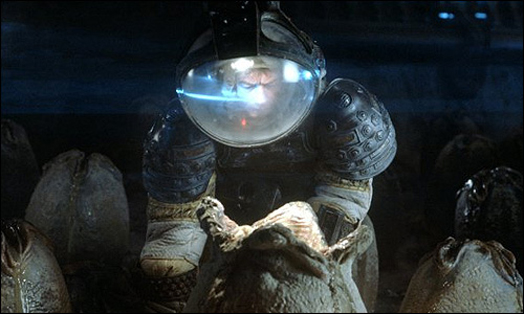 From the facehuggers perspective, this creature doesn't have an immediately accessible orifice. It's not clear what sort of sensory organs the facehugger has, so we don't know if it can "see" that there is a suitable orifice behind the glass of the space suit, or if it is even able to tell that the creature is in fact wearing a suit.

This creature before the facehugger certainly has a big round "head", though, and the facehugger wastes little time in grasping onto it. Even though the helmet is quite a bit larger than the human head, the facehugger is able to successfully grasp it. As discussed in this question, the combination of powerful claws, a long tail, and an ovipositor that can extend some length from the body makes for a fairly versatile facehugger capable of grasping larger and more varied skulls (such as that of the Predator).

Then what does it do once it has a good grip on its target? It starts secreting acidic fluids to dissolve away the outer covering of the creature until it reaches a suitable orifice to impregnate. What would happen if it never found a suitably warm and squishy place to put an egg? I imagine it would just keep dissolving through layers of flesh until it inadvertently killed its potential host, then it would probably venture off to find another host to test drive.

Since the suspicion that the Xenomorphs and their facehugging offspring were "engineered" with species like ours in mind, they probably would not have to work very hard to find an acceptable orifice in which to perform their implantation.

But if we assume, they were designed for a range of species, using Earth as a reference, almost everything large enough to walk on two or four legs has to breathe and I am certain face-huggers aren't particularly whether they use your mouth or your nose for implantation. Given that our sinus cavity connects our eyes nose and mouth, even an eye might be an acceptable if circuitous route to implantation.

But if a creature had a biosystem that did not have a mouth, nose or eye, I suspect the creature could even excrete a bit of their acidic blood and create an access port to softer inner organs if necessary. It wouldn't take much blood to bore a hole into a creature that wasn't naturally acid-proof.

22
Why Do Facehuggers Fit Human Faces So Perfectly?