What is the title and/or author of a story about aliens hijacking the Earth and the Moon?

This may be a novel or a serialized story in a magazine. Published in the late 60s or early 70s.

This story involved aliens coming to earth and wiping out all culture and technology. Humanity is reduced to being elements in a supercomputer-like creation. The earth and moon are set on course to exit the solar system. The moon is burnt to provide heat and light for the earth. Humans are connected mind-to-mind in groups of 6 or 8. One person escapes this and becomes a 'bug' in the system.

This is Wolfbane by Frederik Pohl and C. M. Kornbluth, serialized in 1957 and published as novel in 1959.

A rogue planet, populated by strange machines known as Pyramids, has stolen the Earth from the Solar system, taking it off into interstellar space. The moon has been 'ignited' by alien technology to serve as a miniature sun around which both planets orbit. This new sun is rekindled every 5 years, though as the book opens, the rekindling is nearly overdue and there is fear among the populace that it may never happen again.

The global population has crashed to a hundred million, due largely to the radical climate changes that followed the arrival of the alien planet. Most of the surviving humans are 'Citizens,' passive people living lives bound up with elaborate social rituals, various styles of meditation, and carefully prescribed selflessness. This constraining lifestyle frequently causes Citizens to succumb to mental breakdowns and run 'amok,' attacking anyone within reach. Persons who commit this or any other crime face ritual execution.

A small minority of the population who retain their aggressive natures are referred to as 'Wolves.' They are considered to be a direct threat to the rest of society. These Wolves, however, generally see themselves as superior humans and refer to the Citizens as 'Sheep.' This labeling system is somewhat ironic, because the Wolves generally try to trick the Sheep into avoiding their settlements, while any Wolf who is caught by the Sheep is murdered.

Glenn Tropile is exposed as a Wolf while stealing bread. He escapes execution and is collected by a community of Wolves living in the town of Princeton. They find he doesn't entirely fit in there either, but hope he may get collected by an 'Eye', giving them a chance to measure this process in detail. This eventually happens and they find, as expected, that his disappearance was facilitated by the Pyramid on Everest. Glenn Tropile has been sent to the Pyramid's planet.

We then learn his fate. To the Pyramids, the human race is nothing more than a useful source of 'Components' for a complex world-machine devoted mostly to feeding these artificial and semi-organic beings. Tropile is suspended in a fluid-filled tank and 'wired in' to the vast computer system. Later, he is linked to seven other humans as a 'Snowflake' - eight minds joined together to facilitate more complex tasks than a single human Component could manage.

The burning moon and an eight-person snowflake may be seen in this cover: 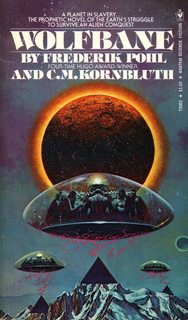 Another cover (much more abstract) was also common: 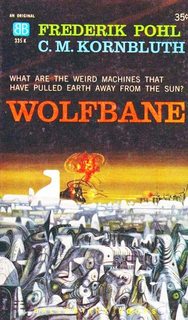 Personally, it is my favorite of the Pohl/Kornbluth collaborations, with each of the writer's strengths really coming through. (The conversation with the last dead alien on the pyramids' planet is hillarious.)

15
What short story has aliens upset that Star Trek was cancelled, forcing Earth to resume production?
28
Short story about a conversation between a comet and the Earth
5
Seeking name and author of book where main character returns to Earth many thousands of years after he left due to time dilation effect of his flight
9
Short story about mind-hijacking aliens (60s or 70s)