Why was the axe in Justice League so special? What made it so?

During the Justice League movie (2017) the antagonist,

says something about his axe that implies that it has some special power. Also, when he loses this item, he seems to be suddenly a lot weaker and is shocked when it is broken.

What is the item made from and why is it special? Does it have powers that increase his strength or abilities?

There didn't seem to be any explanation for this in the movie, so I am happy to have comic or other canon material related answers.

After a little investigation I discovered a page on the DCEU wiki for the character, which includes the following under his powers and abilities:

Electro axe (Formerly): Steppenwolf's primary offensive weapon, which the New God uses to blast and obliterate much of the area surrounding him at a given time. The ax's red-hued energy is also capable of infecting humans, turning their skin a pale grey, while lengthening and sharpening their teeth, seemingly transforming them into the zombified Parademon soldiers of Apokolips. In addition, the ax is seemingly indestructible, as it can go up against Wonder Woman's weaponry. However, it was ultimately destroyed after being frozen by Superman's Arctic breath, which made it become brittle, thus allowing Wonder Woman to shatter it with her sword.

It also says that

his weapon, the ax, was the source of his godly power

which seems to contradict some other mentions in the wiki about his power being an innate part of his physiology.

As such, my question still stands, slightly refined:

What/where is the item from, and is there any canonical evidence for how exactly it augments the characters power/abilities?

Steppenwolf has had the corded electro-axe as his primary weapon since his character redesign in the 1980s. For instance, his Super Powers Collection action figure carried it. I have not ever tracked down an origin story for that weapon. However, it does bear a significant resemblance to the electro-prod used by the very minor god Brola in New Gods #2: 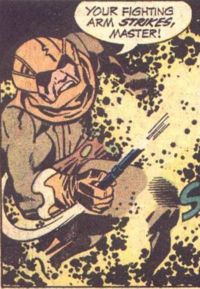 However, the axe is not original to Steppenwolf's character. Here he is (the green guy) in his first appearance: 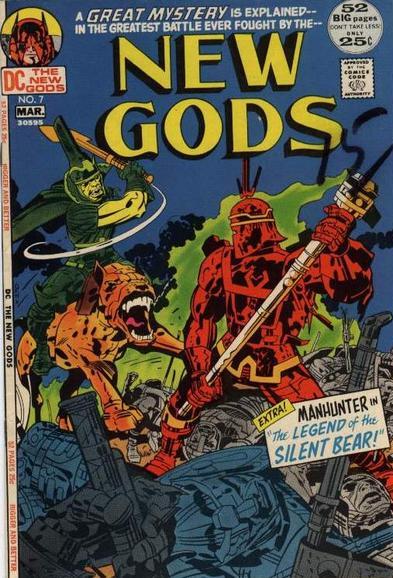 He carried the funny-looking sword all through New Gods #7, up until his death.

Not the answer you're looking for? Browse other questions tagged dc dc-extended-universe justice-league-2017 or ask your own question.

1
Was Jack Kirby's later comic book art influenced by his work on concept art for Lord of Light?