I don't remember anything about the title or author of this book. I think it was a relatively simple title. It was a fairly short book, the cover was a silver-blue (I think?), and I think it had a very simple or one-word title, but I can't remember. As far as I know it was a stand-alone novel, but I can't be sure.

The book had a series of about 4-6ish main characters. The main character was a human man. Humans had created some kind of wormhole or device to send them to other planets in a couple years' time. They found a planet that was completely covered (I'm pretty sure) in very shallow water, (it was much like the water planet in Interstellar by description, but without large waves) or possibly marshy, where they found these organisms that, when held, could heighten their mental abilities.

As far as I remember they looked rather like sea cucumbers and couldn't / didn't communicate with the humans, and they never found out if the creatures were sentient or not. Once held, they could heighten a person's mental abilities, then when held by a second person joined the two together mentally.

But the more people picked up the creature, they began to quickly experience mental side effects and several of them died rather gruesomely. They did end up going back to Earth safely the first time, but found the life form could not help them like they'd hoped and it ended up very open-ended without saying the fate of the main character.

It was probably written in the mid nineties and most likely before, in the eighties or seventies and was probably only about 200 pages long. I've been haunted not being able to figure out what it is. I've tried advanced google book search and other book-finding sites, and looking up keywords but no luck.

This is the 1976 novel Mindbridge by Joe Haldeman.

Humanity ends up encountering an advanced race called the L'vrai; the main character Jacque and the bridges are key to communicating with them.

This book is full of fun ideas - the interstellar travel method has particularly intriguing limitations. It's my favorite book of his.

This may be your silver-blue cover. 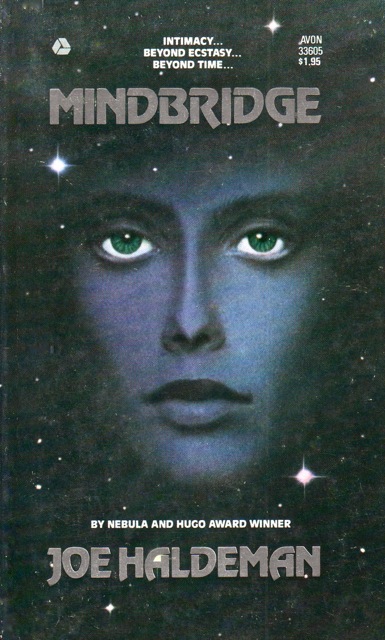 Not the answer you're looking for? Browse other questions tagged story-identification space-exploration telepathy or ask your own question.