Looking for an Old Book about a man stranded on Mars

The first book I ever read for pleasure, way back in about 1958, was a science fiction novel called something like "First Man on Mars." If I remember correctly, he was stranded there. I've looked for books by that name and all the variations I can think of from that era with no success. Does this ring a bell with anyone?

It could also be No Man Friday, by Rex Gordon, which was released in the United States as First on Mars in 1957. 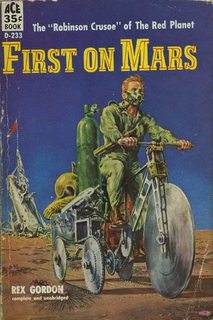 A British rocket, developed at minimal cost and kept secret from officialdom, lifts off from the Woomera rocket range on a mission to Mars. During the voyage, an accident in the airlock kills the entire crew except for engineer Gordon Holder, the novel's narrator, who was returning from an EVA and still in his space suit.

The rocket reaches Mars but crash-lands. There, Holder learns how to produce oxygen and water, also discovering more about Martian species and nourishment. Eventually, he starts cooperating with the titanic inhabitants of the planet to survive. After fifteen years, an American mission lands, thinking themselves the first to reach Mars. Holder contacts the Americans, and then tries to return to the dominant Martian beings, but is prevented from reaching them. He returns to Earth with the Americans.

I usually explain how I came about an answer. In this case, since you were reasonable certain of the title, I went to ISFDB and did an advanced search for books with "First" and "Mars" in the title, then sorted by publication date.

Could it be you're thinking of Marooned on Mars by Lester del Rey? It was released in 1954, which fits your timeframe.

Chuck Svenson was a citizen of the Moon — and proud of it! To him, Earth, with its heavy atmosphere, even though it was the "mother" planet, was not the best place in the universe to live. As he rocketed back home from a blast off at a point high in the Andes, he anxiously looked forward to the reception he'd receive at Moon City. For he was the only citizen from Earth's satellite to be selected by the United Nations’ interplanetary commission as a crew member for the first ship to attempt a flight from the Moon to Mars.

How Chuck learned that his orders had been changed, that he was to be replaced by an earthling, started a chain of dramatic and thrilling events that ended in the weird and torturous catacombs of Mars. For the spunky teenager would not be cheated of the universe's greatest adventure! When the Mars-bound ship rose, on a pillar of flame above the desolate lunar landscape, it carried a stowaway in its hold. What Chuck's extra weight meant to the carefully figured fuel supply, the ship's crash landing on a "lifeless" planet, the disappearance of vitally needed tools from the vicinity of the stricken ship—fill these pages with suspense and mystery.

This was an answer I found after my initial search directed me to Wikipedia's Mars in Fiction article.

Possibly one of the books in The Martian Tales Trilogy:

Hero John Carter proves himself against deadly foes in The Martian Trilogy. In the first installment, Carter wins the affections of the "princess of Mars" and the respect of the Martian warlords whom he befriends. The excitement continues in The Gods of Mars when Carter engages the Black Pirates in airborne combat above the dead seas of Mars and leads a revolt to free the Martian races from a religion that thrives on living sacrifices. In the third book, Warlord of Mars, Carter overcomes the forces of evil that would destroy the planet. By the end of the trilogy the Martians all clamor for a triumphant John Carter to be their king.

It was first published in 1912, so it would have been available in 1958. Here's the books in the trilogy:

8
Looking for a novel I read 25-30 years ago about a man drifting in the Bermuda Triangle
10
The A-Z book of Science FIction
11
Youth Christian space sci-fi book series with hyperspace, androids, and Mars caves
8
Help identify story: Man stranded on Mars, romances alien, ends in tragedy
13
Looking for really trippy animated movie
31
Short story about a young man stranded alone on Mars who runs out of air
8
Old sci fi story about a ship that arrives on an alien planet and watches evolution from bacteria to whatever comes after man