How did the Death Star move?

In the Star Wars saga, one of the most iconic weapons of the Empire was the Death Star: a self sustained weapons platform the size of a moon, with the capacity to destroy a planet. in A New Hope, we see the first Death Star in close proximity to the planet Alderaan, holding the planet hostage as the Empire tries to deduce the location of the Rebel Alliance's headquarters. In Return of the Jedi, we see the second Death Star in "dry dock" over the forest moon of Endor as it is being constructed.

My question is: How did the Death Star move? I imagine a spherical space station the size of a moon would be utterly massive, requiring a massive amount of thrust to move it. If it was constructed in low orbit of an inhabited planet/moon, the gravitational field would be immense, consisting of the planet/moon's gravity, and the Death Star's own considerable gravity. Breaking that gravitational field would be a massive task, yet we see no thrusters or engines on either Death Star. Were they hidden, stored under the station's surface while not in use? Was the station towed by another vessel?

At the core of the Death Star was an immense, cavernous housing for the battle station's power generator matrix. A fusion reactor of incredible proportions, fed by stellar fuel bottles lining its periphery, produced the raw energy demanded by the Death Star's superlaser and hyperdrive systems. Much of the station's interior volume was filled by the machinery necessary to sustain such a fusion core, with sublight propulsion systems and defense field generators lining the outer equatorial regions. Realspace propulsion was handled by an external array of powerful ion engines, which converted the raw fusion energy of the station's core into thrust and pressed the station's great mass into any motion dictated by the Death Star's huge navicomputer banks. While ion engines of such magnitude are highly radioactive, no other system could provide the directional control necessary for a station of such great size. Engineering personnel assigned to monitor ion vent operations usually wore radiation suits.

The Death Star's hyperspace motivator units were comprised of linked banks of field generators such as those found aboard Imperial Star Destroyers. One hundred twenty-three individual hyperspace generators, tied into a single navigational matrix, were necessary to carry the Death Star beyond the speed of light. The intense power generated within the battle station, combined with its great mass, gave it both magnetic and artificial gravitational fields equal to those of a natural body many times its size.

At the true equator of the station was a deep trench, encircling the Death Star like a straight, endless canyon some 376 kilometers in length. Here were housed the station's primary hanger bays, drive thrusters, heat exhausts, primary sensor arrays, and tractor beam systems.

It also adds the following statistics:

Here is an exterior diagram from the technical journal showing where the ion drives are located: 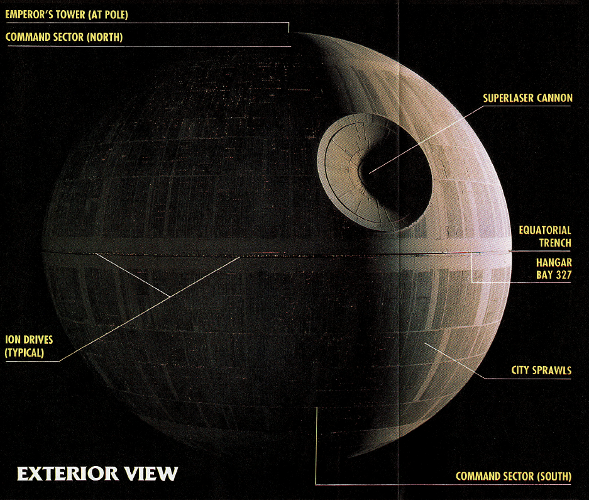 Here is a interior diagram from the technical journal: 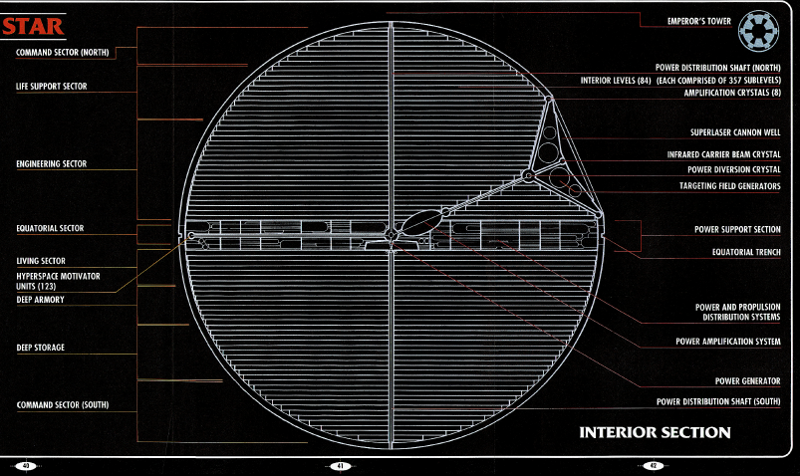 There is a nice full color multi-page cross section of the Death Star in Star Wars Incredible Cross Sections which shows the ion sublight engines and hyperdrive are hidden inside of the moon space station along the equatorial sector.

Below are close-ups on where the ion sublight engines and hyperdrive are located. Notice that they are hidden beneath the surface of the Death Star. 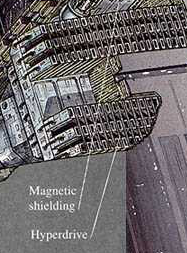 The Essential Guide to Vehicles and Vessels (1996) states:

Fully half of the battle station's interior was filled by the reactor core, the sublight and hyperdrive systems and the superlaser housing. 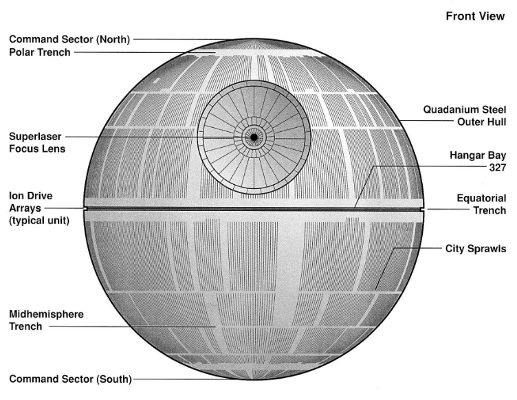 It depends on what level of canon you are looking for.

If you accept the Gaming books, the Death Star Technical Companion (at least one of them, I believe there were several) lists it as having both Ion drives and a series of 123 hyper-drive field generators. See chapter two, Technical Specifications. 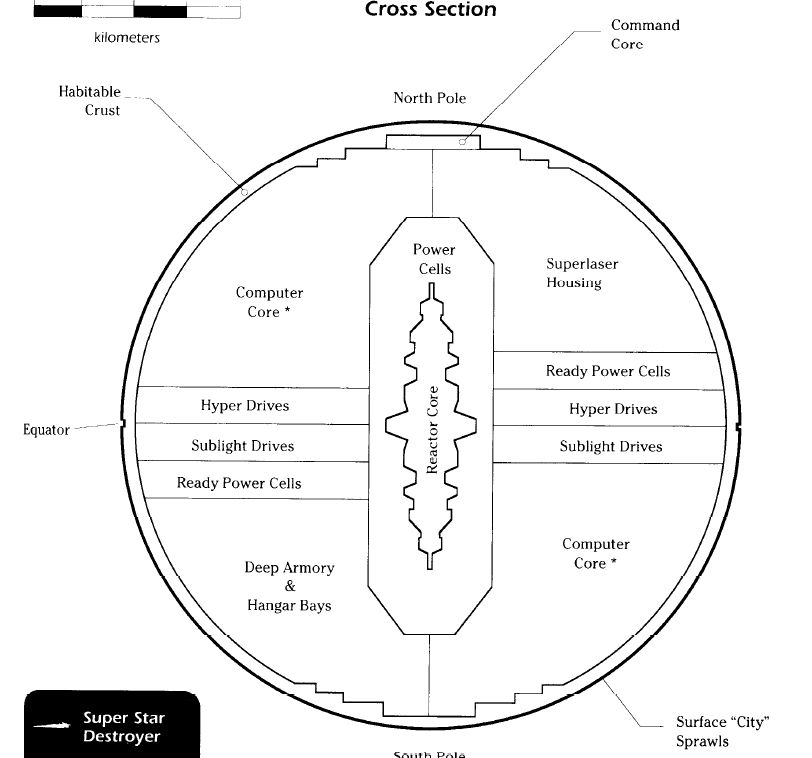 Given that the reactor was deep inside, we could well have been seeing the ports the Ion drives used, and never realized it. In most space vehicles that we see, the source of the propulsion is visible as it's close to where it's being emitted, and we see the burning / glow / whatever -- In the Death Star, the Reactor was deep inside. I believe the Ion output ports were inside that trench along the middle.

As I recall, there is also more on this in the expanded universe; the Death Star that we eventually see was the result of a fairly substantial evolution.

One thing to remember, though; the Death Star was HUGE. If you look at the picture I included, that Star Destroyer in the corner is to scale, and you may recall those things were huge, themselves. The Death Star was the size of a small moon; the thrust ports could be easily visible on the surface, and we still might not see them, as most shots of the Death Star show a larger portion of it's surface -- If there are a few hundred of them, and they are each say 500 meters square, we'd never notice them.

In new Disney canon, we don't know deep details yet other than it has a hyperdrive.

He listened to the main reactor's muffled roar.... as the station reconfigured itself for hyperspace transport. (Rogue One official novelization by Alexander Freed)

The hyperspace journey had gone smoothly and the station was ready for war (Chapter 21).

The drive was definitely special-built, although we don't know how different it is from Star Destroyers in basic high level design:

Components for the hyperdrive generator will be shipping on schedule from Desolation station, where initial tests have been completed. ("Tarkin" by James Luceno, Chapter 7 "Matters of War")

As for moving slower than light, I think that space operas like Star Wars and Star Trek are goofy if they don't specify that ships use generated gravity drives for slower than light travel.

Thus breaking free of the gravity of Endor's Moon, for example would be no problem. Just artificially generate a much more intense gravity field pulling the Death Star away from Endor's Moon.

Thus the Death Star and other space opera spaceships shouldn't need to have any visible ion thruster units or rocket nozzles.

And the Death Star would be totally useless if it didn't have a hyperdrive.

If it didn't have a hyperdrive:

"It's the planet smashing super weapon of the First Galactic Empire, heading for Alderaan."

"What? How old is that? Didn't the Fourth Galactic Empire end five thousand years ago? Why would such an ancient weapon show up now?"

"Did you sleep in ancient history class? Alderaan led the revolt against the First Galactic Empire. And now the Death Star has finally completed the voyage to destroy Alderaan after tens of thousands of years."

That wouldn't be very practical from the Empire's point of view.

Didn't Vader and kenobie fight while the Death Star was still in the Alderaan system. Didn't Vader say:

"This day will be long remembered. It has seen the end of Kenobie and it will see the end of the rebellion."

Obviously the Death star was predicted to make the interstellar journey from the Aladeraan system to the Yavin system in less than one day. Thus it had a hyperdrive.