Is Ki-Adi-Mundi married to multiple wives in Disney Canon?

In Legends, Jedi Master Ki-Adi-Mundi was said to have several wives. While this was normally against the Jedi Order's rules regarding attachments, an exception was made for him because of the low population of his species. (I think this was a retcon to explain why the comics said that he was married, but then Attack of the Clones came out and established that Jedi couldn't have attachments).

Did any of this transfer to Disney Canon? Did he ever mention being married to multiple wives, perhaps in Star Wars: The Clone Wars TV show?

No, he's not married

This idea has been completely discounted in canon; Pablo Hidalgo confirmed as much on Twitter in October 2016: 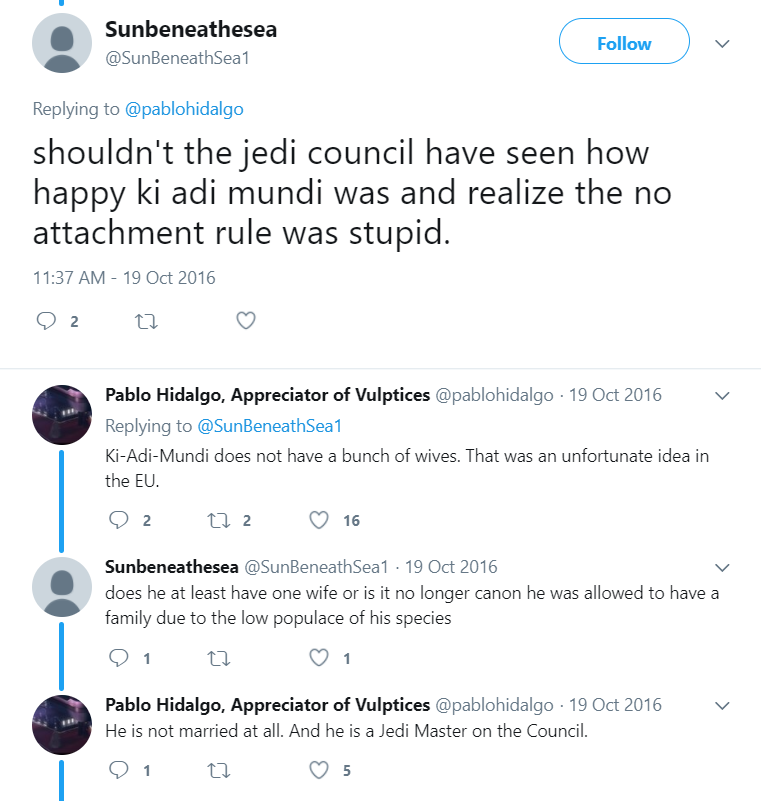 @SunBeneathSea1 shouldn't the jedi council have seen how happy ki adi mundi was and realize the no attachment rule was stupid.

@pablohidalgo Ki-Adi-Mundi does not have a bunch of wives. That was an unfortunate idea in the EU.

@pablohidalgo He is not married at all. And he is a Jedi Master on the Council.

19
Were the Jedi ever publicly accused of exploiting the clones?
3
Is the 501st Legion accorded any special status or purpose in Disney's canon?
21
Why didn't the Jedi Council send a team of Jedi to go after General Grievous?
20
In canon, has a Jedi ever used the light side to kill a Sith?
8
Why would the Jedi not go public with their knowledge of the Sith, especially Count Dooku?
11
Are the Jedi violating the Jedi Code by being so involved in military and politics?
8
Before The Mandalorian, what was the origin of Boba Fett's armor?