Is there any official mention of the show changing the dates in the show to AL from AC?

While researching my answer to this question Do we know when Daenerys Targaryen was born? I came across a slight oddity in how the Game of Thrones wikia shows the dates. Dates for the show appears to be given in BAL and AL meaning (Before) Aegon's Landing.

The dating system is based on Aegon the Conqueror's first landing on Westeros which started the Targaryen Conquest. Thus all dates are "AL" for Aegon's Landing or "BAL" for "Before Aegon's Landing".
Game of Thrones wikia, Timeline

The maesters of the Citadel who keep the histories of Westeros have used Aegon's Conquest as their touchstone for the past three hundred years. Births, deaths, battles, and other events are dated either AC (After the Conquest) or BC (Before the Conquest).
The World of Ice and Fire, The Reign of the Dragons: The Conquest

I had a look around and found an explicit quote from GRRM on the reasoning of the change of dates in the show compared to the books, basically to keep the sex and nudity.

There was a fair amount of explicit sex in the series and some fans of the books were taken aback.
One of the reasons I wanted to do this with HBO is that I wanted to keep the sex. We had some real problems because Dany is only 13 in the books, and that’s based on medieval history. They didn’t have this concept of adolescence or the teenage years. You were a child or you were an adult. And the onset of sexual maturity meant you were an adult. So I reflected that in the books. But then when you go to film it you run into people going crazy about child pornography and there’s actual laws about how you can’t depict a 13 year old having sex even if you have an 18 year old acting the part — it’s illegal in the United Kingdom. So we ended up with a 22 year old portraying an 18 year old, instead of an 18 year old portraying a 13 year old. If we decided to lose the sex we could have kept the original ages. And once you change the age of one character you have to change the ages of all the characters, and change the date of the war [that dethroned the Mad King]. The fact we made all these changes indicates how important we thought sex was.
Entertainment Weekly, A Dance With Dragons Interview

This makes sense as with age changes, other dates need to be changed too so the story still lines up correctly. As such it makes sense that they've changed the year system in the show.

However, I've yet to find any official, or canon, mention of the shows year system as AL. All I've found so far is wikia just using the dates but no mention of where they got it from.

Is there any official mention of the show changing the dates in the show to AL from AC?

After asking the question I decided to tweet Elio and Linda, the co-authors of The World of Ice and Fire. They've come back saying that GRRM only confirmed BC and AC for TWoIaF and so the writers of the show, and hence wikia, had already committed to BAL and AL. Though they have only speculated on this, this is the best information I can find so far.

@westerosorg The show uses the year system BAL and AL and the books use BC and AC. I can understand the reasoning in the change but I can't find it having been commented on except the wikia. Do you have more insight into this?

Fans assumed "AL" for a long time, until GRRM established BC/AC for TWoIaF. But TWoIaF came after the show, so the writers had already commited to BL/AL I suppose, and that's what a wiki solely dedicated to the TV show reflects
Twitter, @westerosorg 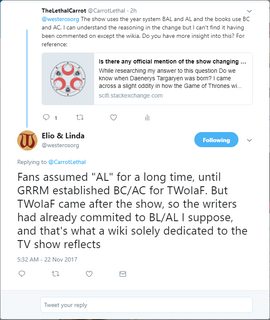 14
Do we know when Daenerys Targaryen was born?
4
When was Robert Baratheon's coronation?

7
Was Orys Baratheon the first Hand of the King?
3
Do we know the age of Robb and Jon?
13
Why did Stannis join the rebellion?
9
How did Westeros measure time before Aegon's Conquest?
7
Why did the show appear to swap Casterly Rock and Highgarden?
12
Is there a legal age for drinking wine in Westeros?
12
Does Jaime Lannister have dyslexia in the books?
4
How do we know what year in-universe events happen?