Fantasy book with a brother-sister pair in a besieged castle. Girl can shapeshift. Boy gets turned into a sword

I'm pretty sure I read this one in the early to mid 90s in Kentucky. It was a paperback fantasy novel. I think it had the girl leaping off of the ramparts of a castle and starting to develop wings (or maybe silhouetted by a bird shape). The basic plot line was the children are in a castle besieged by a man (I honestly don't remember if he was evil, ambitious, or why he was trying to take their castle). I don't remember where their parents were, or if they were still alive. The girl can shape-shift, but largely has to conserve mass, I think.

Near the end of the book, the besieger agrees to let the girl go, but refuses to let the boy go, so she looks up a spell that lets her turn her brother into a sword so that she can sneak him out, the spell being reversed by her immersing the blade in the sea. For some reason, she winds up using the sword in a fight, impaling one of the besieging army (maybe the leader?) in the heart. This results in her brother transforming back (human blood being similar enough to sea water), but she is still allowed to leave with him because technically speaking, she only left with a sword.

I want to say that the title was Taking Flight, but I think I might be confusing that with the Lawrence Watt-Evans Ethshar novel, which I read around the same time.

Could this be Elisabeth Waters's book Changing Fate(1994)?

Akila uses her wits and her shape-changing abilities to save her brother Briam when their home is besieged. But that leaves them both on the run, with Akila trying to keep them safe, while Briam finds more trouble to get into. When he is chosen as year-king in the city of Diadem, Akila struggles to save his life, finding help in the most unexpected places.

Acila has run Eagle's Rest for her twin brother Briam since their father left on another land grabbing expedition. When Lord Ranulf comes bearing bloody proof of their father's death to take their land and home Acila is determined to save her brother and get them both far away from the usurper. However, Lord Ranulf isn't just interested in a kingdom anymore because he now knows Acila's secret which gives him a particular incentive to marry her.

When looking in Google books (my search), I found this quote (page 169):

They say that the lady there was a powerful sorceress, and she turned herself into a magic sword so that her twin brother could use her to kill a man in single combat and win his freedom. Then she changed back, bathed in her victim's blood — and my father asked her to marry him!

The original edition cover from Goodreads that may be what you remember: 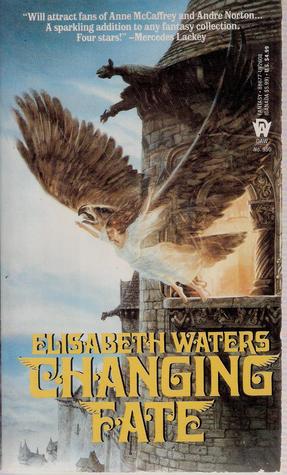 Obviously this has a some differences from what you said, but pretty close.

Not the answer you're looking for? Browse other questions tagged story-identification novel shape-shifter or ask your own question.