Watching the TNG theme, I've noticed an odd pattern in the aft-ventral hull of the Enterprise-D:

It can be clearly seen 48 seconds into the opening sequence at high resolution .

It always looked to me like a place where the ship could split apart, like with Saucer separation. So, can Galaxy-class Starships like the Enterprise-D eject/separate their warp nacelles from the stardrive section? Or is this just a random feature of the model?

I know it never happened in the series' canon, so feel free to include other sources.

They had the capability to detatch individual nacelles:

Ed Whitefire's original blueprints for the Enterprise-D, which were used as a basis for Rick Sternbachs official version, contain "Warp Nacelle Emergency Disconnects". These are, however, at the top of each pylon and not where the image in the question shows.(Click for full image)

From the official Rick Sternbach drawings, we see the Warp Nacelle Emergency Disconnects have been removed, however he's kept the same design for the explosive bolts, although hasn't labelled them. (Again, click to embiggen)

As further outlined in the comments from the Technical Manual, the nacelles could be ejected at a speed of 30m/sec. Note in the official drawing above the ten explosive latches which were marked on the original as "explosive bolts".

But only saucer separation is seen on screen:

After a warp core breach, where LaForge confirms there's nothing he can do, the separation sequence for the warp core begins:

LAFORGE: Coolant leak! We have a coolant leak, everybody. Let's go. Let's get out of here. ...Everybody out! Let's move! ...Let's move! Let' go! Bridge, we have a new problem. We're five minutes from a warp core breach. There's nothing I can do.

RIKER: Deanna, evacuate everyone to the saucer section. Mister Data, prepare to separate the ship

After everyone has been evacuated into the saucer section, Data completes the ejection and confirms so: 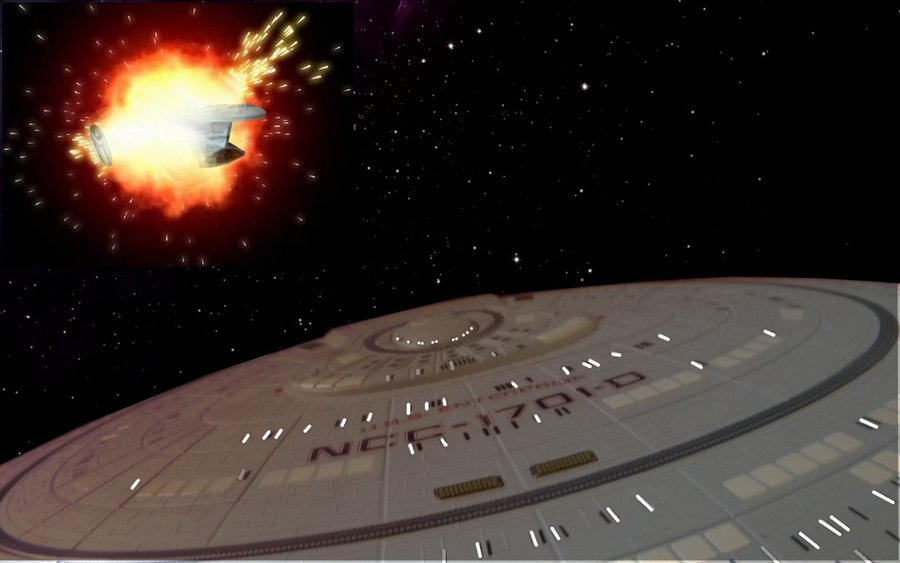 Yes according to the TNG Tech Manual pg 63.

The emergency separation system would be used in the event that a catastrophic failure occurred in the PIS , or if a nacelle damaged in combat or other situation could not be safely retained on its support pylon. Ten explosive structural latches can be fired driving the nacelle up and away at 30m/sec.

In "The Apple" the Enterprise is being pulled down to a planet:

SCOTT: No change, Captain. The orbit is decaying along computed lines. No success with the warp drive. We're going down and we can't stop it.

KIRK: I'm sick of hearing that word can't. Get that ship out of there.

KIRK: Then use your imagination. Tie every ounce of power the ship has into the impulse engines. Discard the warp drive nacelles if you have to, and crack out of there with the main section, but get that ship out of there!

SCOTT: Sir, I'm going to switch over everything but the life-support systems and boost the impulse power, but that's just about as dangerous.

This indicates that Constitution class starships have provisions for emergency separation from the warp nacelles.

Not the answer you're looking for? Browse other questions tagged star-trek star-trek-tng spaceship uss-enterprise or ask your own question.

19
Has there ever been an instance of a starship needing to eject its nacelles in "Star Trek?"

30
Was the Enterprise-D the first Galaxy class starship? Why?
22
Is the "Enterprise" the Only Upside Down Ship in "Star Trek?"
15
How fast can the Galaxy class Starships go in reverse?
11
How tightly can a starship turn while at warp?
11
Why do Oberth Class starships have no saucer strut?
4
Why didn't the Sovereign Class have folding warp nacelles?
6
What is the offensive distribution between the stardrive and saucer section on a Galaxy class star ship?
16
Can a Galaxy-class saucer section join onto a Nebula-class ship?
6
Crew rank distribution of the Enterprise D (or Galaxy-class)?