How similar is Earth-2 to the DCnU's Earth-1?

In the DC Earth Two (issue #1) Wonder Woman keeps refering to the gods by their Roman names. On the normal Earth they use the Greek names. This means all the gods are the same, but for some reason they are using their alternate names.

How similar / dissimilar is Earth Two compared to "original" Earth?

The two planets are similar in some ways but completely different in others. Many of the metahumans known on Earth-1 will appear in variant costumes (and variant histories) from their Earth-2 counterparts. The primary superheroic difference is the Trinity (Batman, Superman and Wonder Woman) appear in the first issue but die by the end of it.

(And its too bad, I really liked the Earth-2 Superman and Wonder Woman's costumes.) 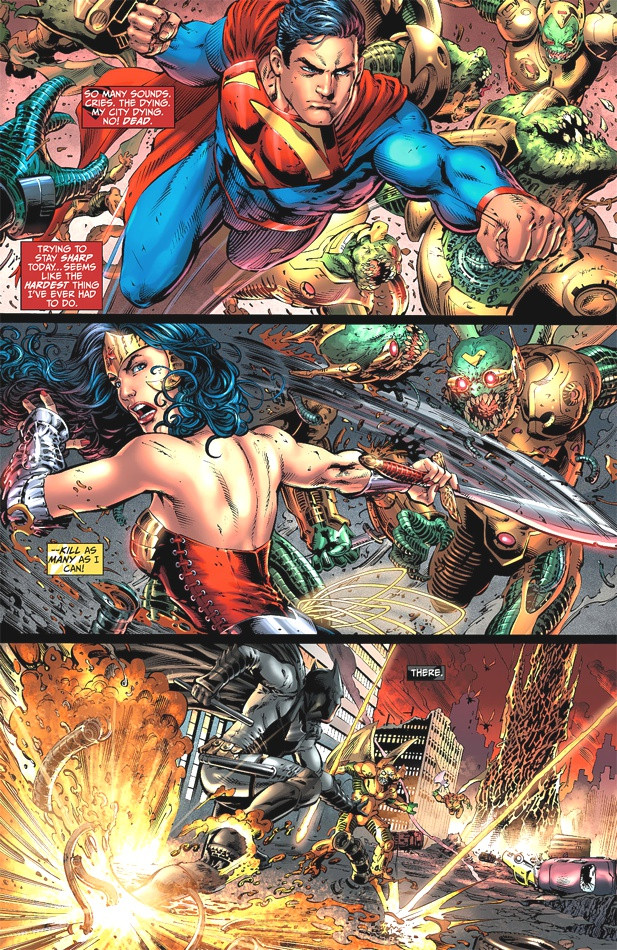 The Earth has a united government because the planet has been under assault from an alien world (though it has not been confirmed, the aliens look like Parademons, from Darkseid's homeworld of Apokolips) (see the Fourth World) and as such, the world has a completely different point of view regarding aliens.

The planet is covered with scars from the war, still smoldering craters, human fatalities worldwide, and the Roman deities unseen on Earth One, have participated and indeed several have died defending Earth Two. It appears that Mercury will have a part in the creation of Jay Garrick (the Earth-2 Flash).

Earth-2 will highlight the formation of the new DCnU Justice Society. This is DC's attempt to rebuild and restart the well-loved property of the original Justice Society, starting them young, new, fresh and by killing the Trinity, their world will have a different approach to being heroes, indeed these heroes will have to make their own way determining heroism in their own unique style.

In this new version of Earth Two, the Justice Society of America is not the first superhero team. Instead, they're a group of new, young heroes that come together approximately five years after the inspirational death of Superman, Wonder Woman and Batman, and the disappearance of Supergirl and Robin.

Earth-2 will also have Mr. Terrific (Michael Holt) from Earth-1 transfer between worlds (setting up the inevitable crossover books made popular in the seventies with the story "The Flash of Two Worlds.)

6
Are the actions of the same character in different multiverses linked?

13
Are the gods in the DC universe actually Gods/Deities?
5
Late 80s/early 90s DC Comics arc with Greek (and Roman?) gods involved?
12
What were the votes for Hawkgirl to remain in the Justice League?
0
Wonder Woman: gods or aliens?
5
Is Superman more powerful than the Greek gods?
3
Justice League comic where the Arkham Asylum gate is locked with a Kryptonite chain
6
Spinoff / Alternate Universe of DC Comics involving mother earth rising up?
10
1970s Wonder Woman/Batman comic where they have to fight an evil Walt Disney