Book of sci-fi short stories: purple and black cover with sorceress and cat

I remember owning a book that had a several short sci-fi stories. One was about an older couple who used to listen to the music in the rain. Another about a woman who wished for a hundred of everything. I think there was a story about bad kids who were sent to camp and then were eaten by dinosaurs? The cover was purple and black and had a sorceress and a cat on the cover(I think one of the stories was about her). I read it in the early nineties. Written in english and probably at a middle school level. Thanks! 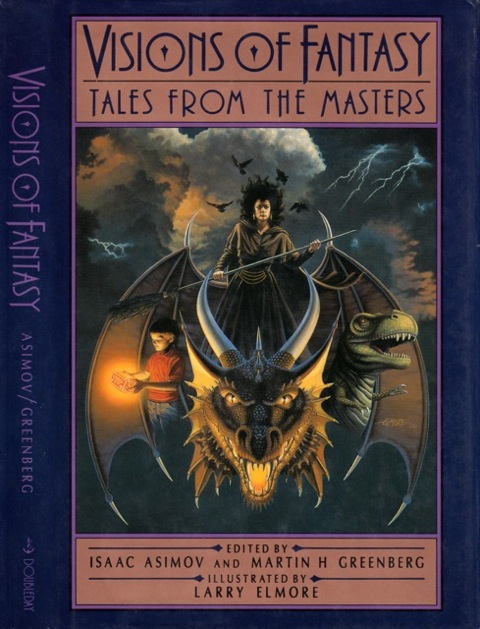 Visions of Fantasy: Tales from the Masters, a 1989 anthology edited by Isaac Asimov and Martin H. Greenberg.

One was about an older couple who used to listen to the music in the rain.

I'm not sure about this one, but if it's one of the stories in that anthology, by elimination it's likely to be "Voices in the Wind" by Elizabeth S. Helfman.

Another about a woman who wished for a hundred of everything.

Not a hundred, but "A Dozen of Everything", by Marion Zimmer Bradley, originally published in Fantastic, April 1959, available at the Internet Archive.

"I'm afraid I don't quite understand." The djinn frowned. "Trousseau? That word has come in since my time. Remember, I haven't been out of the bottle since King Solomon was in diapers."

"Well—sheets, and towels, and slips, and nightgowns—" Marcie began, then dismissed it. "Oh well, just give me a dozen of everything," she told him.

"To hear is to obey," the djinn intoned. "Where shall I put it, O mistress?"

"Oh, in my room," Marcie told him, then, remembering five-dollar-a-week hall bedroom, "Maybe you'll have to enlarge the room a little, but you can do that, can't you?"

"Oh, sure," said the djinn casually. "A djinn, my dear mistress, can do anything. And now, farewell forever, and thank you for letting me out."

I think there was a story about bad kids who were sent to camp and then were eaten by dinosaurs?

Mom and Dad, I think I'm the only kid left, and I don't know if I can hide much longer. The head counselor tricked us into leaving the camp today, saying that somebody had seen a Tyrannosaurus Rex. He told us all to run through the rain forest at the north end of the camp, but when we ran into it, something horrible happened.

26
Fantasy book filled with short disturbing stories
12
Book series with travel to purple grassed planets and space pets
9
Sci-fi book about this girl with purple hair and some others travelling into space
4
Short story collection identification
7
Which SF anthology about dinosaurs is this?
24
A fantasy book with seven white haired women on the cover