During Star Trek TOS were there only 12 Constitution-class starships in all of Starfleet?

I'm trying to get a feel for the size of the Federation during the time of The Original Series.

The following commentator writes that during the time of TOS there were only 12 Constitution class warships.

My question is: During Star Trek TOS were there only 12 Constitution-class starships in all of Starfleet?

That being said, when we learn of the USS Defiant (no, not that one, the earlier one) there may have actually been 13.

Within the series (and films) we actually see (or hear about) 10 Constitution class vessels;

Several others were mentioned in the various films.

According to The Making of Star Trek page 165, " The following names have been established for starships: Enterprise, Exeter, Excalibur, Lexington, Yorktown, Potemkin, Republic, Hood, Constitution, Kongo, Constellation, Farragut, Valiant, and Intrepid. The latter four are listed as destroyed in various episodes."

I do not know why the book lists fourteen names it was written by Stephen E. Whitfield and Gene Roddenberry. There are two memos in the book to Gene from D.C. Fontana and Bob Justman with other suggested names for starships.

No there were 12 like the Enterprise (Constitution class) at the time of the episode "Tommorrow is Yesterday" when Kirk utters the line: "There are only twelve like it in the fleet."

The Constitution Class had been around for at least 13 years and probably longer (The Menagerie) and Kirk had served aboard at least two of them before assuming command of the Enterprise. The USS Republic (Court Martial) and the USS Farragut (Obsession.)

It is almost certain the Farragut was lost or destroyed when it encountered the Cloud Creature, and that would make Kirk's statement in Tomorrow is Yesterday true when he said it. There were only twelve like it (that were left) in the fleet.

The Star Trek Reference manual lists four as destroyed. We saw at least two of them destroyed, Intrepid in Immunity Syndrome and Constellation in Doomsday Machine. These episodes occurred after Tomorrow Is Yesterday. We heard of the destruction of Farragut in Obsession. We also probably saw the destruction of the Excalibur in Ultimate Computer but it was never established that it was destroyed beyond salvage.

This leaves the Valiant. This is problematic. It may be bad writing. Other than the ship named 'Valiant' that disappeared two hundred years before the episode 'Where No Man Has Gone Before' we saw no Constitution class USS Valiant. We did however see a USS Defiant (Tholian Web) that wasn't on the writer's guide list. Like the other ship names used from history there was an actual British battleship named Valiant. There was never an actual ship named 'Defiant.' There was a fictional HMS Defiant in the film 'Damn The Defiant' I think somebody messed up, meant to type Valiant but chose to type Defiant instead and it became hard to explain canon.

Either way there were fourteen original Constitution Class and thirteen left when Kirk made his statement in Tomorrow Is Yesterday.

I was trying to recall all the names of the current starships mentioned in the 80 TOS episodes (if you include the pilot and the two-parter where they cannibalized the pilot as separate episodes) and I came up with this list:

I left out the USS Farragut, from “Obsession” since it existed eleven years earlier. I was only interested in “current” versions.

Here is a link to a similar question:

And my summary should be noted:

Finally, it should be remembered that there are three separate things in the era of TOS: Starships, Constitution Class ships, and the Twelve like the Enterprise.

It is common to assume that the three are all the same, that Starships equate to Constitution Class ships that equate to the Twelve like the Enterprise.

But it is possible that only two of them are the same.

All three - Starships, Constitution Class ships, and the Twelve like the Enterprise - could be different and separate, some being subcategories of others perhaps.

The existing answers are focused on naming the original Constitution class starships. I'd like to focus on the question's incredulity regarding such a small number and what people should think what the rest of the fleet looks like per "I'm trying to get a feel for the size of the Federation during the time of The Original Series". This is a photo of the Enterprise with the Antares from "Charlie X" remastered. The new CGI effect was based on a cargo ship from the animated series. Point being that in its time the Constitution class was as much of a technology leap as the Galaxy class was 75 years later over older classes. And in TNG the original intent was to only have a dozen Galaxy class ships in the fleet too.

Starships are expensive even in a post scarcity society - they take a decade to design and build and require crew. Before JJ the adults in charge of star trek realized you can't just launch thousands of these and have them maneuver underwater. 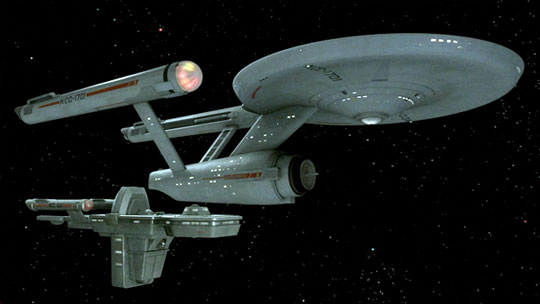 Share
Improve this answer
edited 2 days ago
answered Jan 14 at 0:01

8
During Star Trek TOS - how many starships were there in all of Starfleet?

34
Were there REALLY over 73,000 Federation starships commissioned?
17
Did the Federation actually have consistent naming conventions for their ships of the line?
11
Are Galaxy or Constitution class ships capable of landing?
12
What is the first non-Constitution class Starfleet ship we see in canon?
48
Female uniforms and colored panties in Star Trek TOS
5
Were there any named, blue beverages in the original Star Trek series?
12
Why do ships in Star Trek ToS not have seat belts?
8
During Star Trek TOS - how many starships were there in all of Starfleet?
9
Did other federation starship classes appear in TOS?
3
Bridge lights dimming or changing color after "battle stations!" was declared on some ship in Star Trek TOS?