Book about a professor who summons a female demon

Book is about a professor that summons a female demon. The demon and the professor fall in love and she helps him overcome issues including alcoholism. Not really horror but more slice of life. 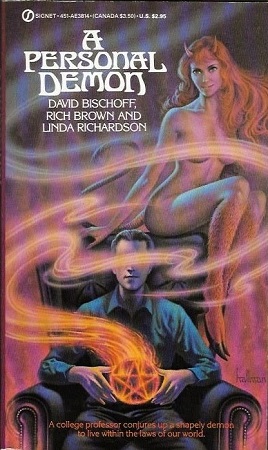 A Personal Demon (1985) by David Bischoff, Rich Brown, and Linda Richardson; also the answer to this old question.

A college professor conjures up a shapely demon to live within the laws of our world.

I don't have a copy of the book; the following excerpt is from the original short story it's based on:

"Like I was saying, you need some guts. Some self-assertion. I know your problems, I can sympathize. But it takes action to clean out your skull—"

"Who says I want to clean out my skull?"

"You want to be head of the Literature Department, don't you?"

"I didn't give you permission to poke around inside my brain."

"You didn't tell me not to, either. If you want to succeed, stick with me. I'll help you. Now listen—"

"Hold it!" Willis objected. "Let me get things straight. I call up a demon, and suddenly she wants to control my life. Well you listen, Ana—Ana—" The alcohol was slurring his voice. "Anny, I am fully capable of messing up my life on my own without your help."

"Yeah." She smiled at him. "You can be saved. I like you, Willy. You did me a favor getting me out of Hell." She drew at her cigarette. "I'm going to do you a few favors. As the pug said to the belly dancer, 'Stick with me, baby, and I'll wrap your ass in silk.' The first is to get you this job you want so much—though Satan knows why you want it. Wouldn't you rather have a few million bucks? Maybe a yacht and—"

"I want to be head of the department. I have ideas on teaching I want to implement and—"

"Okay. Okay. The money you'll want later. Right now we'll settle for this rather petty ambition." She blew a triangle of smoke in has face, causing him to cough. Funny kind of smell, he thought twitching his nose.

Not the answer you're looking for? Browse other questions tagged story-identification novel urban-fantasy or ask your own question.

8
Looking for an old book; thought the title was 'My Personal Demon'

3
Book about a sea demon disguised as a man who killed by kissing
8
Looking for an old book; thought the title was 'My Personal Demon'
23
I'm looking for a Sci-Fi book with a female protagonist who doesn't wear logos
6
Book about a demon trying to build a subverted fairy tale to win a contest
20
Man has invisible demon following him that turns visible when eating people
5
Book - tattoo artist summons demon, saved by blind lady with sword
11
80s/90s fantasy book: female protagonist, demon-related magic, “knife”/“blade” in title…?
9
Book series about a young man who was bullied until he tattooed his entire body with protective runes