Which would win in a battle between a Mon Calamari star cruiser and an Imperial Star Destroyer?

It is often seen in major Star Wars space battles that rebel fleets, containing Mon Calamari star cruisers, fight Imperial star destroyers. However, its appears (from my perception) that both can be (relatively) easily destroyed by other smaller star fighters, such as X-Wings or TIE fighters (or at least depicted in Star Wars Rebels and at the Battle of Endor.)

This is addressed in The Official Star Wars Fact File #12. In short, the M80 Mon Calamari Cruiser is considered to be nearly comparable to a Star Destroyer. They'd need luck to win in a straight one-on-one fight. 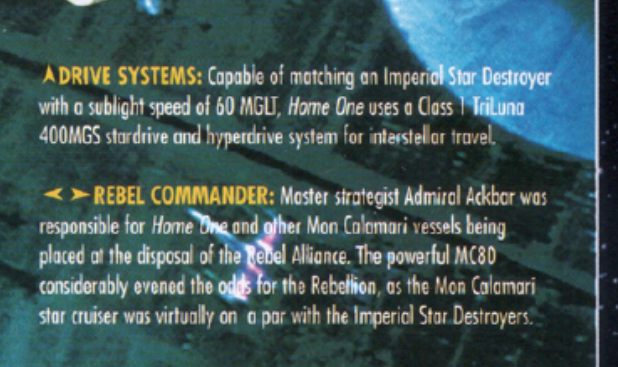 "The powerful MC80 considerably evened the odds for the Rebellion, as the Mon Calamari star cruiser was virtually on a par with the Imperial Star Destroyers".

30
What's the rationale behind Rebel factions still having large capital warships?
29
Effectiveness of capital ships vs. fighters in Star Wars
15
Are Rebel pilots trained to conduct suicide runs?
8
Are there any specifications of the inside of Star Wars ships available?
15
Where do TIE Fighters generate thrust?
18
Where were the capital ships and bombers?
6
What does the interior of a Corellian Corvette’s bridge look like?
20
What did the Rebels intend as the role for their capital ships in the Battle of Endor?
2
Is a Hammerhead Corvette the only ship type capable of safely ramming other ships?
10
Why were there so few TIE fighters during the Battle of Exegol?