Why did Thor make Mjolnir look like an umbrella?

In Thor: Ragnarok, Thor and Loki visit New York City. When they go, Mjolnir is made to appear like an umbrella. Everyone clearly knows that Thor is Thor (even snapping selfies), and it's not like anyone else could use or steal it, so why did he bother making Mjolnir look like an umbrella?

Thor disguises Mjolnir as an umbrella because he is trying to stay low key and trying not to be identified as he is looking for Odin.

In fact this is one of the reasons Thor chooses to go to Earth after Asgard was destroyed because he believes he is "liked" on Earth.

Anyway the reason he disguises Mjolnir is the same reason a celebrity might wear glasses and a big brown jacket while going to shops in public, they might not want attention from fans.

One of the changes Thor makes is by disguising Mjolnir as an umbrella. This is referencing the early days of the Thor comics where a man named Donald Blake (name dropped originally in the first ‘Thor’ movie) wielded the power of the God of Thunder. He would disguise the hammer as a cane, which he would then tap on the ground to transform into the hero, much in the same way it was done in ‘Ragnarok’. 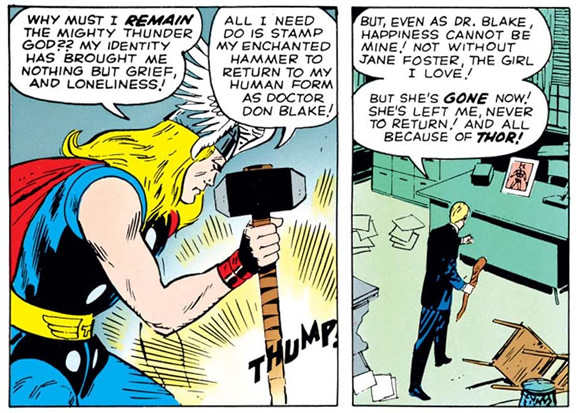 Not the answer you're looking for? Browse other questions tagged marvel marvel-cinematic-universe thor-marvel mjolnir thor-ragnarok or ask your own question.

9
Would the nuke in Avengers have effectively stopped the invasion?
14
What authority does Tony Stark have to claim back the shield of Captain America?
82
Why was Thor worthy to lift Mjolnir?
22
If Mjolnir was made for Thor, why is Hela seen using it in Thor: Ragnarok before it was even given to him?
3
Did Loki and Thor arrive at Asgard right after the Avengers?
18
Why doesn't Mjolnir give Captain America Thor-like armor?
23
In this drawing of the Avengers, who's the guy on the right?