As I was preparing this answer, I was struck by the creepy hollow eyes of the two of the figures in the stained glass window on the Edward Gorey cover of John Bellairs The Revenge of the Wizard's Ghost. 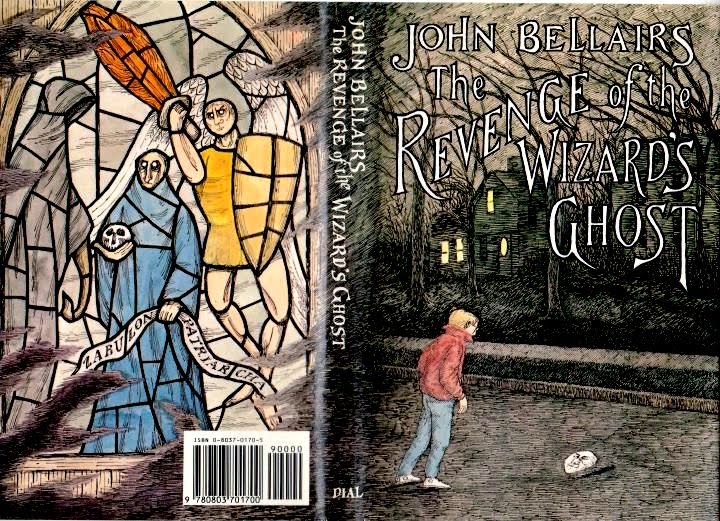 Edward Gorey's style of illustration makes those vacant white eyes especially creepy. However, the eyes were not just an independent invention of Gorey's; they are described in the text just this way.

This set me wondering whether Bellairs had described the stained glass figures that way specifically because he thought Gorey would be able to make them look particularly eerie.

The association between the author and illustrator ran for about twenty years. Gorey provided cover illustrations for almost all of Bellairs' young adult horror novels, and sometimes there were interior illustrations as well. The most extensively illustrated was Bellairs' first young adult novel The House With A Clock in Its Walls, but Gorey was still providing covers for books that were completed even after Bellairs' untimely death.

So, is there any evidence (interviews with either author or illustrator, perhaps) that the author developed any elements of his young adult horror stories so that they would work well when Gorey illustrated them?

Answering my own query:

It's not quite a definitive answer to the question, as I asked it, but I found this article, covering the subject of Gorey's illustrations for Bellairs' stories.

However, despite their interwoven legacy in the minds of readers, Bellairs and Gorey never met. A member of The Edward Gorey House Museum in Yarmouth, Mass., went so far as to say that they may never have corresponded.

Andreas Brown who helped Edward Gorey establish the Edward Gorey Charitable Trust (and who was a friend of Gorey for many years) acknowledged this to likely be the case. “I haven’t seen any correspondence between them in the archives. They would send him the manuscript and he would read it and then do a cover that he thought was appropriate for the story,” Brown told me in a phone conversation. “It doesn’t mean there couldn’t be two or three letters in miscellaneous correspondence. But as far as we are aware, they never communicated.”

In fact, according to Brown, later in his life, Gorey wanted to disown his cover illustrations for Bellairs. “He called me up one day and said, ‘Let’s get all of the Bellairs work out of the archives.’ He just didn’t think it represented him and what he was trying to do. He saw it as his grunt work.”

This certainly demonstrates that there was not active collaboration between the two creators, although it does not indicate exactly how Bellairs approached his writing, in regard to Gorey's illustration work.

Not the answer you're looking for? Browse other questions tagged art illustrated-story or ask your own question.

8
What was this YA novel about an evil presence or cult in a cathedral?

17
Did HPL ever draw his creatures, or see drawings in his lifetime?
12
Anthology that contains illustrations for some Arthur C. Clarke short stories