Could a recording be used to send Mister Mxyzptlk back to the Fifth Dimension?

Mister Mxyzptlk, the infamous Impish from the Fifth Dimension, and Superman -- well not really villain, more like nuisance most of the time -- can be sent back home, if he can be forced or tricked to say his own name backwards.

While that might have been a problem in the past, in today's world, basically everybody carries a recording device in the form of a smartphone (and Superman, or rather Clark Kent probably even long ago carried a dictaphone to conduct interviews as a reporter).

When Mxy introduces himself, usually with his name, could him saying his name forward be recorded and just played back backwards (I am sure there's an app for that): what would then be heard would be his voice saying his name backwards? Would that force him back to the Fifth Dimension? Or if the fact that it's played backwards could be detected, what if he would just be recorded saying his own name backwards once and then that recording would get played whenever he shows up again to send him straight back?

Has this method of simply using a recording device ever been attempted in the 73 years since the characters introduction? Or does it violate the "rules" how this dimension-hopping works?

Superman takes a recording of Mxyzptlk's voice and plays it backwards, shunting the hapless villain back into his home dimension for 90 days. 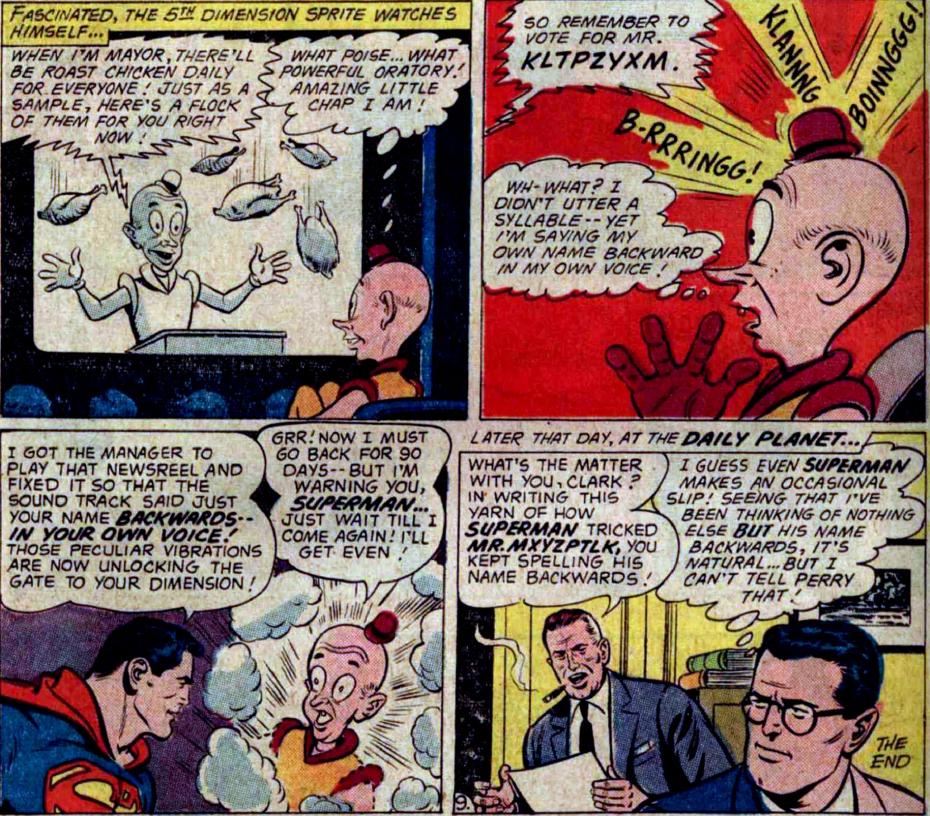 Within Supergirl: The Girl of Steel (1984), the second Which Way book in the Super Powers series, Supergirl records Mister Mxyzptlk saying his name and plays it backwards, dismissing him. 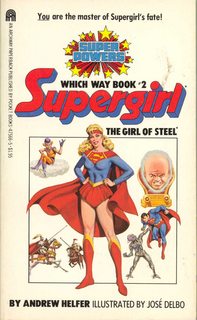 Even though this question is already answered and has two excellent examples, there is always room for a third.

In Superman #351 (1980) Mr Mxyzptlk is up to his usual tricks. This time he stops​ a circus caravan by turning its wheels square. Among the circusgoers there is an immigrant boy called Juan who practices​ English by using a tape-recorder. 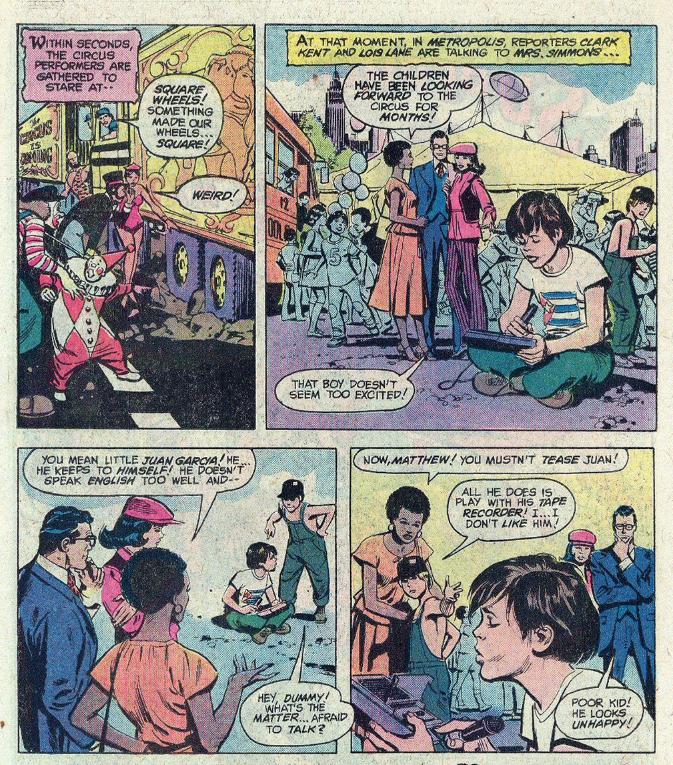 Unable to fly the circus to Metropolis because of legalities, and annoyed by Mr Mxyzptlk's mocking, Superman decides​ to make sure himself the circus performs as usual. Mr Mxyzptlk of course follows and causeds more trouble before introducing himself to the audience.

Superman notices​ that Juan recorded Mr Mxyzptlk's introduction and realizes​ it is time to act. Superman borrows Juan's tape-recorder and replays what Mr Mxyzptlk said backwards, which sends the imp back to the fifth dimension. 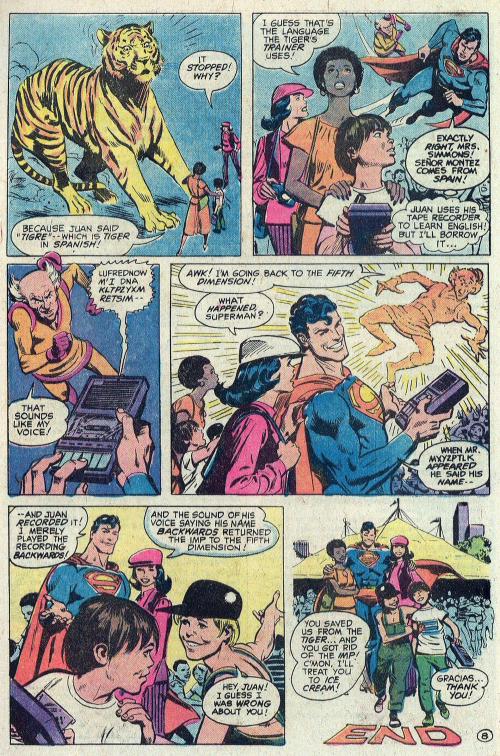 In Wonder Twins #1 (2019), Zan and Jayna, while doing an internship at the Hall of Justice, are warned by Superman about how dangerous Mxyzptlk can be. While he's away, Mxyzptlk appears to the twins who use the League's supercomputer to play his pompous introduction backwards.

They then watch him fade away, with a jaded look. Given the amount of times this trick has worked (see other answers), who can blame them? 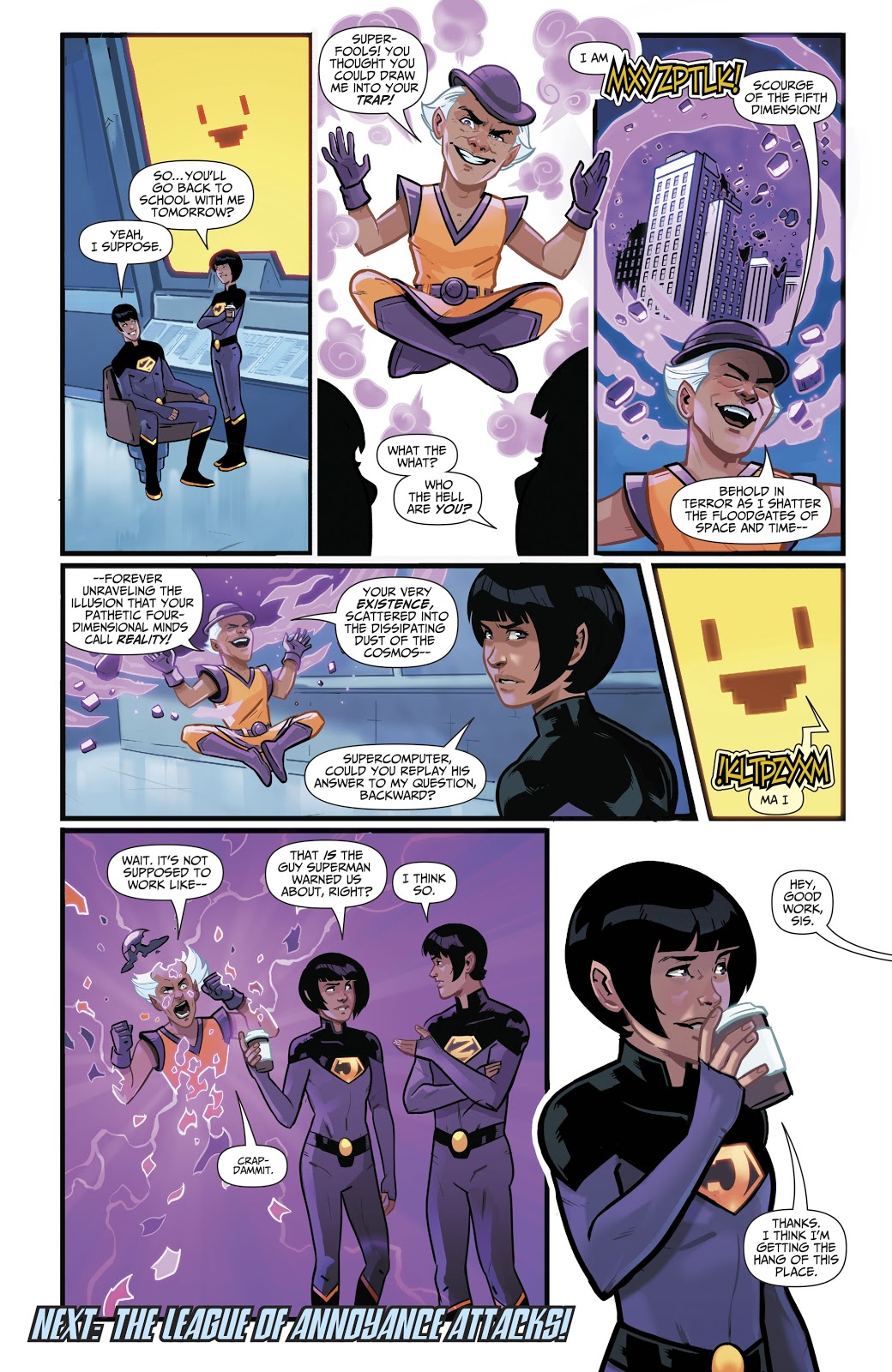 17
Can the Lazarus Pits be used to reliably bring people back from the dead?