Future soldier triumphs in arena vs aliens, results in human victory in the war [duplicate]

I remember reading this story many years back, and I vaguely started to recall it the past few weeks. Here is the image that jump-started the recall process— 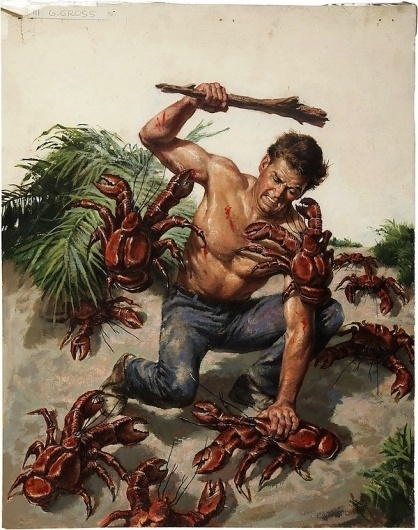 But for the life of me, I can't recall much else than what I've written below. It's starting to get on my nerves now, halp!

That's it. That's all I can remember. Anyone else remember reading anything like this?

This is Fredric Brown's "Arena" (bolding mine).

The mysterious Outsiders have skirmished with Earth's space colonies and starships. Their vessels are found to be faster and more maneuverable, but less well armed. There have been no survivors of the small raids on Earth forces so Earth has no information about the Outsiders. Fearing the worst, Earth builds a war fleet. Scouts report a large armada approaching the solar system. Earth's defenders go to meet them. All indications are that the two fleets are evenly matched.

Bob Carson is the pilot of a small one-man scout ship on the outskirts of the fleet. While engaging his Outsider counterpart in battle, he blacks out. When he awakens, he finds himself naked in a small enclosed, circular area about 250 yards (230 m) across. Other than vegetation and blue sand, he sees in the distance only a red sphere about 1 yard (0.91 m) in diameter. The sphere turns out to be an Outsider, with several dozen fully retractable thin tentacles to manipulate objects. Based on its method of movement, Carson labels it a "Roller".

Carson hears a voice in his mind that identifies itself as the end product of the evolution of an entire race. While traveling through various spaces and dimensions, it had come upon the impending battle. The evolved intelligence decided to intervene because both humans and Rollers have the potential to one day evolve into a being like itself, but the upcoming war would utterly destroy one side and hurt the other so badly that it would not be able to fulfill its destiny. It therefore chose one individual from each species to fight in this small arena. The loser will doom its kind to instant extinction.

Carson and his opponent discover, through trial and error, that there is an invisible barrier between them, and that living things cannot cross it, though inanimate objects can. Carson tries to communicate with the Roller, to see if a compromise is possible, but receives a mental message of unremitting hatred.

Carson then observes his foe catch a small blue lizard, casually pull off its legs, and throw the body unimpeded to his side. Thinking that the barrier is down, Carson charges and nearly knocks himself out when he is proved wrong. While he is on the ground recovering from the collision, Carson is seriously wounded in the leg by a rock thrown by the Roller.

Aware that his wound will eventually kill him, Carson searches desperately for a way to get to his enemy. When he finds that the blue lizard is still alive, he puts it out of its misery. Then realization hits him – the lizard passed through the barrier while it was alive but unconscious. Taking a risk born of ultimate desperation, he knocks himself out on a slope and rolls through to the other side. He regains consciousness but lies motionless in order to lure the faster, healthier Roller into range, then kills it using a knife knapped from a flint-like rock.

The next instant Carson finds himself back in his scouter ship. He receives a jubilant message from his commander, Captain Brander aboard the mother-ship Magellan, informing him that Earth's first salvo somehow caused the entire enemy fleet to disintegrate, even the ships that were out of range. When Carson sees several newly healed scars where he had been wounded, he knows he did not imagine the fight, but wisely keeps his experience to himself.

19
Man vs. Alien from an old anthology
16
Human & Alien captured, observed by higher beings
14
Human vs. alien to avoid extinction by omnipotent being
12
SF short that I read in 1987

21
SF TV show about a war between humans and aliens?
11
Which kids movie, from the 80s involved aliens with guns that could be powered by pennies?
9
Book: The main protagonist is transformed into one of the non-humanoid aliens
6
Aspiring human combatant in arena with “handicap field” to equalize combatants' strength
20
Book about aliens arriving in an old country; people capture their spaceship and arrive at alien's planet