Science fiction book about human society living deep underground Earth's surface; very deep for so long nobody knows there is possibly something of interest in the upper levels, until some make their way up to the surface for the first time. published in around the 1970's. They are astounded by the 'Huge spaces, ocean, moon, immaculate landscape and very friendly robot inhabitants of the Earth's surface that has not seen Humans for thousands of years.

Read this in late seventies I think, and would love to know the Author and Title so that I can track it down. Don't think there is a film version. Love to get the book. Anybody old enough to have read it will surely (hopefully) have a better memory than me. Many thanks, in anticipation.

The querent has confirmed that the book is Kuldesak by Richard Cowper, published in 1973, as suggested by Danny3414 in the comments. 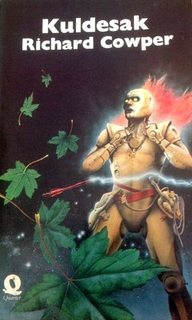 Earth, 2000 years after the final holocaust which drove man deep underground; a ghostly, deserted planet peopled only by the diligent robots who, century after century, silently harvest grain which no man will eat.

Up into this eerie world comes Mel, a questioning young Roamer who has disobeyed the Law which says he must never venture into or beyond the Lost Levels. Together with three companions, and a companion not of this Earth, Mel takes on the awesome task of freeing human beings from the tyranny imposed on them by their remote ancestors; of justifying the agonized cry of Barney as he died in a Forbidden Level: "I am a man! Everything is for man!"

I've been looking at the 'blurb’ posted above and am editing in a bit more info (I owned this book for a couple of years and read it at least three times) as there is very little available online.

No real spoilers, this is world building and is given in first two chapters:-

The 'holocaust’ referred to wasn't quite like that, with humanity taking refuge underground, instead man had been forced to move there to free up valuable land for crops.

Then the worldwide controlling computer decided there was too many people so had itself a Skynet /” I have no mouth but I must scream” moment and wiped out most of mankind.

It kept a million or so tame people (“Plants” so called because of metal implants in their temples) to maintain systems at main globular node points. It also kept a few thousand free humans (“Roamers” who, as the name implies, acted like gypsies and went from Plant town to Plant town in small clans) to ensure a genetic mix.

The young Roamers congregate whenever an area is having a “Plant High”, this is electronic pleasure waves sent out from the computer to the implants, the Plant people sit around moaning in delight and the women don't realise they are being sexually molested by these young men...until a few months later when they develop a bump!