In which comic does Batman travel back in time to the night of his parents’ murder?

I'm looking for the comic book/one-shot where Batman is somehow hurled back in time to the night of his parents' murder. It was here that he realized that there IS NO Joe Chill. Facing the hard-learnt truth he sees that he was the one who murdered the Waynes. If he doesn't, there will be no Batman.

I read a short summary of something like this a long time ago. Is it part of some alternate Earth story line or a one-shot comic book?

The closest match I know of is the "To Kill a Legend" storyline from Detective Comics Vol 1 500. In that issue, the Phantom Stranger takes Batman and Robin into a world where time has moved differently, and his parents have not yet been gunned down. Batman faces the decision of whether he should save this alternate set of parents, knowing that that would mean no Batman, someone who has saved thousands of lives over the years. Complicating things, a bit of research shows that this world lacks any heroes, to the point that they don't even have mythological heroes. And, of course, it's barely even a question as to what he decides.

Despite the moral conflicts of the whole ordeal, Batman's intervention causes the event in which the Waynes are killed, although Chill is now not part of the event. Realizing his mistake, Batman saves the Waynes and a young version of himself, who was a spoiled and obnoxious little kid. Having saved the Waynes, the Phantom Stranger returns the heroes to their own world, but the deed has changed the young Bruce Wayne's life, who now changes his demeanor and wants to become the "Bat Creature" who saved them. The Batman will exist, although this time is not because of vengeance, but for a rather inspiring motivation. 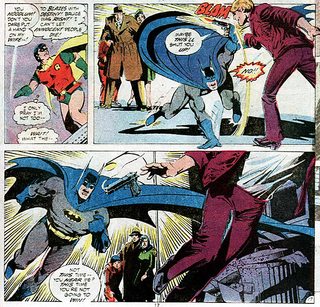 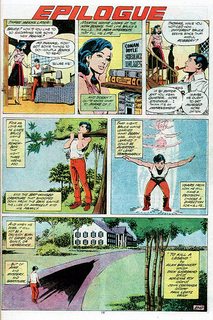 There's an interesting analysis of the storyline here, which harps on the whole "no concept of a hero" thing, and how it beggars belief.

What do you think would be the craziest reveal that could occur in comics?

Not the answer you're looking for? Browse other questions tagged story-identification dc comics batman episode-identification or ask your own question.

7
In which Comic Book series is Batman actually Thomas Wayne?
7
In which Batman comic issue was there a plague of illiteracy?
16
Time travel book from the 50's
27
Why was Bruce Wayne spared by the mugger?
38
Does Adam West-era Batman ever mention his parents?
5
Were Batman's parents' killer(s) ever linked to Penguin?
2
Is the Batman who Laughs storyline in "Dark Nights Metal" part of its own story?
8
Batman as a child -- did he show any exceptional behavior before his parents' murder?