Female companion to Robin in his independent book, was pursuing vengeance. Drugged Robin for a fight

I am pretty certain this happened in the first solo book. Robin teamed up with a female crime fighter (I don't remember her costume except I think she did have a mask and short hair, and it was sort of color-reversed from his). She was pursuing vengeance, and I think was Balkan of some variety. She eventually achieves her goal of vengeance, and kills her target, much to Tim's chagrin. I want to say that she'd drugged him, either to make him fight, or to improve his fighting ability, something akin to cocaine.

I also have this vague memory of her having sexually assaulted him in the process, but that might just be me misremembering one of the many times the Bat Family have wound up in that situation. I want to say this was the only arc she showed up in too.

Just to be clear, it's not Spoiler or Darla, two of the girls I do remember being in his life.

It's Dava, introduced in Robin #49 in 1998, later than I'd thought, exited in Robin #52. And I was wrong about the colors being reversed in their costumes. 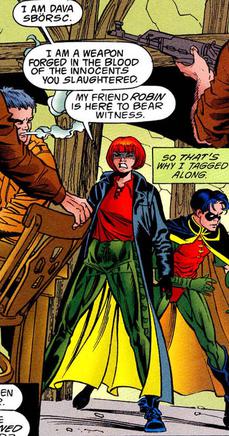 Dava Sbörsc's homeland of Tbliska was left in ruins by a long and bloody civil war, with the country being divided into the two countries Krasna-Volny and Transbelvia, neither of which acknowledges its neighbor as a true country. Both sides committed numerous atrocities in the war, which left thousands dead. When very young, Dava joined the Transbelvian army and pledged herself to hunting down and killing the worst killers in the Krasna-Volnian army. Being fast but small, Dava realized she would have to end any combat quickly if she was to win. To that end, she committed herself to learning all "single-blow techniques" - martial arts attacks that can defeat a foe with a single attack. She had mastered almost all known single-blow attacks (including "The Scalpel" "The Wind Through the Reeds" "The Lion's Paw" "Wave and Shore" and "The Skullcrack") when she sought out The Master of the Iron Hand, to learn his technique "The Whispering Hand". While learning from the Iron Master, she encountered Tim Drake (Robin), who was also studying with the Master at the time. She greatly impressed Robin, defeating him in a sparring match with astonishing speed. Robin, in turn, impressed her when he skillfully dispatched a thief seeking to take the dojo's texts. Dava confided in Robin that she also intended to seek out Lady Shiva to learn the Leopard Blow technique. Tim was greatly troubled by this, as he had met Shiva in the past and knew what a ruthless killer she was.

Robin, meanwhile, had tracked Dava down, only to find that she was unconcerned about Shiva. Still wishing to protect Dava from Shiva (Tim was troubled during this period because he had recently failed to save a life), he was forced to accompany her on a mission to fight Dvak Tvorakovich, a Krasna-Volvian General who had killed entire Transbelvian villages during the war. When they confronted the General the two were immediately surrounded by armed guards. However, Dava kissed Robin at that point, and to Robin's surprise, he immediately found himself super-fast and super-strong, allowing him to defeat the armed guards with ease. Dava used the oil of the Aramilla plant on herself, which gave her superhuman speed and agility (and possibly strength, although this is unclear), and some of this had been transferred in the kiss.

Shiva arrived right after the troops had been defeated and the General had fled, and challenged Dava to a death match. Robin attempted to save Dava, but since he was still under the effects of the Aramilla plant, he did not realize his own speed and strength, and accidentally killed the normally unbeatable Shiva. Dava was unmoved, although Robin was furious with her for making him break his oath to never take a life. At that point, King Snake arrived with more armed Kransa-Volvian troops, seeking to avenge his earlier losses at Robin's hands. Robin resuscitated Shiva, but in the process, transferred some of the Aramilla drug to her, briefly giving her superhuman speed and agility. Although King Snake escaped, Shiva quickly killed the troops, meanwhile General Tvorakovich was killed in an explosion he had intended for his ally King Snake. Feeling that there was no more he could do, Robin left Dava, who angrily defended her path of vengeance-murder as he departed.

15
Looking for a book: title contained a number (maybe), story was about a female humanoid operative
5
Looking for a specific Sci-Fi Book series with female lead
5
Looking for a kids' book with female human-reptilian hybrid
13
Looking for space spy book with female protagonist
3
Werewolf romance book where female had to fight werewolf to keep her position in the pack
11
Book with a female main character living in a convent who has to fight gods
5
LitRPG book with the main character "trapped" in VR MMO world, manages to re-invent tobacco as a crafting recipe, serves a "dark" god
17
Was Batman ever issued a ticket for his infractions?
3
Lone space pilot searching for habitable planets with a mynah bird his only companion