Who created Rocket in the MCU?

According to James Gunn, the creator(s) of Rocket Raccoon is identified somewhere in Guardians of the Galaxy: Volume 2.

Specifically in the MCU, who created Rocket Raccoon? 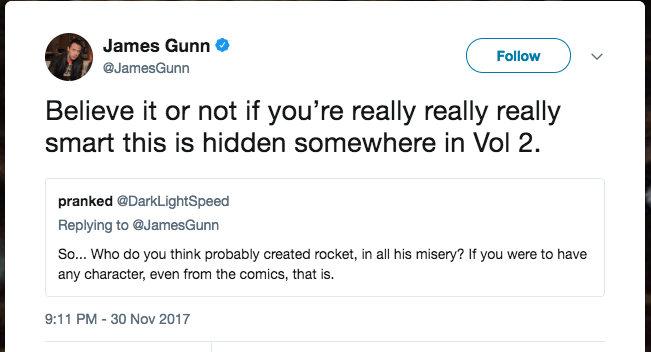 @ConceptsComics: So... Who do you think probably created rocket, in all his misery? If you were to have any character, even from the comics, that is.

Who created him as a character?

Rocket Raccoon was "created" as a character by Bill Mantlo and Keith Griffin according to the Hollywood reporter.

Who created him in the comics?

Who is his creator in the Cinematic Universe?

No one has been able to find the hidden Easter Egg about Rocket yet from the research I've done but I found out (according to Slash Film) James Gunn has commented on the origin of Rocket saying:

So in the coming films we will learn more about Rocket

That glimpse of Rocket’s backside from the first Guardians of the Galaxy movie already suggested a much darker origin compared to his comic book roots. As originally conceived by Bill Mantlo and Keith Giffen, Rocket lived on a planet called Halfworld alongside other anthropomorphic talking animals like Wal Rus and Blackjack O’Hare. Years later, that fairly peaceful origin was retconned into a new past that established the anthropomorphic animals as experiments at the Halfworld Asylum for the Criminally Insane. Essentially, they were all therapy animals.

According to Screen Rant:

The director previously defended the changes made from the comics, and it’s clear he’s not going to stop making adjustments going forward. The films have already told us that Rocket was experimented on to increase his intelligence and strength, but the reasons have been kept vague. Perhaps in Guardians of the Galaxy Vol. 3, Gunn will show audiences the reasons behind Rocket’s abrasive personality.

After lots of research all I can find are theories about his origin infact FilmTheory have made a great video about it:

It suggests Rocket was a failed Super Soldier experiment and etc.

Chances are, it's High Evolutionary, aka Herbert Edgar Wyndham

Evidence is not 100% conclusive but plausible:

Rocket is stated in Guardians of the Galaxy (on his criminal record) to have originated from a planet(?) called Halfworld.

There's no indication in the films what (or where) Halfworld is, but this does tie in with his comic origins, as an experiment by the Robots of Halfworld.

10
Why is Rocket Raccoon a raccoon?
13
How did Rocket meet Groot?
52
How does Rocket understand Groot?
17
What is Rocket Raccoon's expected lifespan?
7
What happened to the rest of the animals created with Rocket Raccoon?
16
Did the original Drax have trouble with metaphors?
14
Who were the other Ravager captains?
31
In the MCU, who created the technology surrounding the Infinity Stones?
14
Where do the spacefaring humans of the MCU come from?