Do the Tauri (humans) use shuttlecraft?

In Stargate SG-1 or Atlantis does the Daedalus class starships carry shuttle craft? I know they have transporter rings and Asgard transporters like in Star Trek, but even the Federation ships had shuttle craft. In Stargate Atlantis they use puddle jumpers granted they are not on a starship but serve the same kind of purpose.

It's not stated. The class of ship certainly has bays that would be more than capable of supporting a puddle jumper but we don't ever see them using one.

On the official cutaway on the MGM website, the nacelles are labelled as F-302 bays, showing that the ship has orbit-to-ground capability without using the ring transporter or Asgard beaming technology. 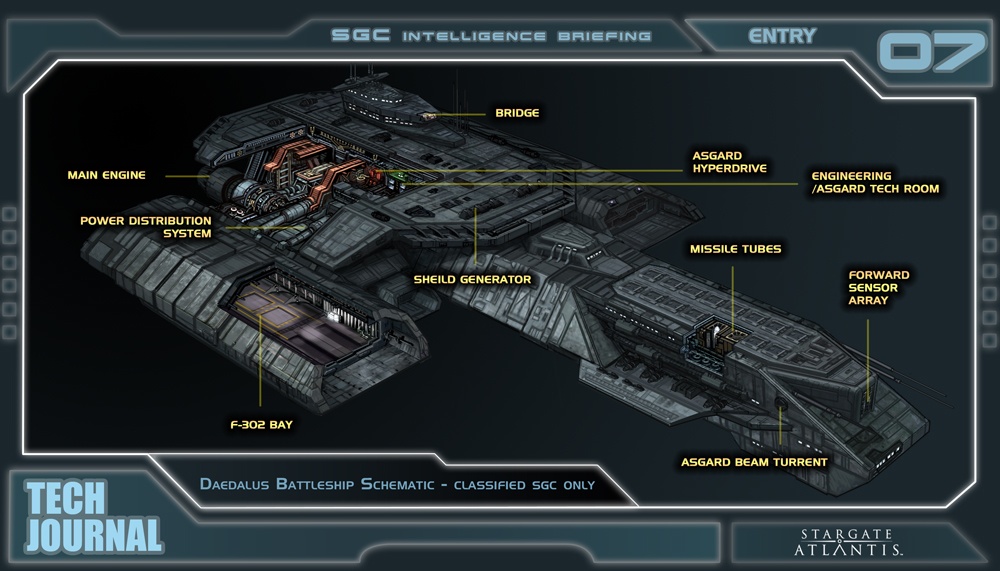 We actually do see puddle jumpers operating this way from x304 in several SGA episodes just not as part of the regular compliment. This probably has more to do with their limited numbers (or bad writing) than anything else. The combination of their cloak and the fact of Wraith transporter jamming makes it an obvious combination. A small hyperspace scout would also make a lot of sense without stretching the definition of "shuttle" by much.

Earth doesn't have any pure transports during the series and never seems to have more than one or two Gou'ald cargo ships when they have any at all so it's not crazy to imagine they'd want to create home grown versions of those and jumpers just as much as the x302 fighter.

Even without shields or a cloak it'd make way too much sense for typical SG team operations to have a flying APC that fits through the gate. I was always a bit disappointed in SGA for never showing teams repelling out of a jumper into heavily wooded or mountainous terrain. The writers seemed to search for reasons to leave jumpers behind and walk through the gate.

It only took a couple seasons to patch those two gliders together into the x301 and another couple to finish the x302 prototype. From there it seems they deployed a hundred or so in the following few years. It'd be strange if they weren't about to introduce prototypes of small hyperspace cargo ship and/or a jumper analog by the time SGA ended. Given McKay's hyperspace jumper those could even be one and the same.

But as Valorum said we don't see it happen in the show. If events in the SG universe had progressed over the past decade it'd seem certain to happen by now.