In Star Trek Discovery why can't Saru triangulate their position from the stars? [closed]

Ask Question
Asked 3 years, 6 months ago
Active 2 years, 2 months ago
Viewed 666 times
6
Closed. This question is off-topic. It is not currently accepting answers.

In the Star Trek Discovery Episode S1:E9 Into The Forest I Go, Saru tells Captain Lorca:

I have no idea where we are.

Today we have GPS navigation systems and sonar, but naval navigators of today have a passing understanding of our constellations, and can at least use them to orient themselves.

We know that in Star Trek their movements are generally limited to our Galaxy. In the 23rd Century (as today), all the stars in our Galaxy would have a distinctive signature.

It seems reasonable that Saru could look up the signatures of all the visible stars on his database, and from that triangulate his position.

The only extra piece of information we have is that Captain Lorca entered the coordinates before the Spore drive jump.

My question is: In Star Trek Discovery why can't Saru triangulate their position from the stars?

Edit: there was a request for detail on the triangulation method. Agree that spectrospcopy is insufficient, and pulsars are a slight possibility, but the positions of other galaxies seems to be the way to do it.

Thus all the opaque nebulas in Star Trek must be very, very, very tiny sections of nebulas, tiny sections with densities millions, and billions, and trillions of times greater than the typical densities of those nebulas. No doubt astronomers have never detected those tiny super dense sections of nebulas seen in Star Trek because they are so extremely tiny compared to the nebulas they are in.

The principal of stereoscopic vision is the same as the principal of parallax used to measure how far away stars are. The angle to a star is measured with fantastic precision at different times 6 months apart, when the Earth is 180,000,000 miles apart on its orbit. The very tiny difference in the angles to the star gives the parallax and thus the distance to the star. Parallax can be measured accurately out to distances of several hundred light years.

So the way for a starship to find out where it is to search all around in 360 degrees for the brightest objects in various frequencies of the electromagnetic spectrum. Unless the starship is in a solar system only millions or billions of miles from a star, the brightest X ray object detected should be the great galaxy M87 millions of light years away, for example. So comparing the spectrum of the brightest X ray source should show that it is M87 and the angle between M87 and, for example, the center of our galaxy should help orient the starship and give an idea of what galactic region it is in.

Doing that with about 10 frequencies should establish the starship's exact location. Not having seen "into the Forest I Go" I can only guess that Saru is doing that but hasn't completed it yet when he tells the captain he doesn't know where they are. If the Spore Drive instantly jumps a ship from one place to another, starships that use it should be equipped with automatic telescope and computer navigation systems to swiftly measure the ship's new position.

Apparently the possibility of equipping starships with the Spore Drive caused Starfleet to upgrade the navigational systems of starships to swiftly update the position of a starship by the first season of TOS a few years later.

In "Arena" the Metrons transport the Enterprise away from their star system:

(Kirk suddenly appears in front of the crew, who all leap to their feet.)

UHURA: Captain! Are you all right?

(He takes his seat.)

SULU: It's impossible, but there's Sirius over there when it should be here. And Canopus. And Arcanis. We're. All of a sudden, we're clear across the galaxy, five hundred parsecs from where we are I mean, were. I mean

KIRK: Don't try and figure it out, Mister Sulu. Just plot a course for us back to Cestus Three.

We know that in Star Trek their movements are generally limited to our Galaxy.

This assumption is wrong here. Spores Drive is a special case. When Mycelial Network was first introduced, Stamets called it "The veins and muscles that hold our galaxies together". Later, in the series, this network was clarified as a microscopic web spanning the entire cosmos, an intergalactic ecosystem.

Also, in the same episode S01E09 you mentioned,

Lorca: Let me show you something.

Stammets: You've been accumulating this data from my jumps the whole time? Mm-hm.

Lorca: And these scattered pockets of negative mass.

Stammets: They could indicate alternative parallel universes connected to the mycelial network.

Lorca: And with more jumps, we could find a pattern, perhaps even the coordinates to reach them.

Lorca: You showed me this invention could take us to places that we never dreamed we could reach.

Lorca: Places far beyond our preconceptions of time and space. 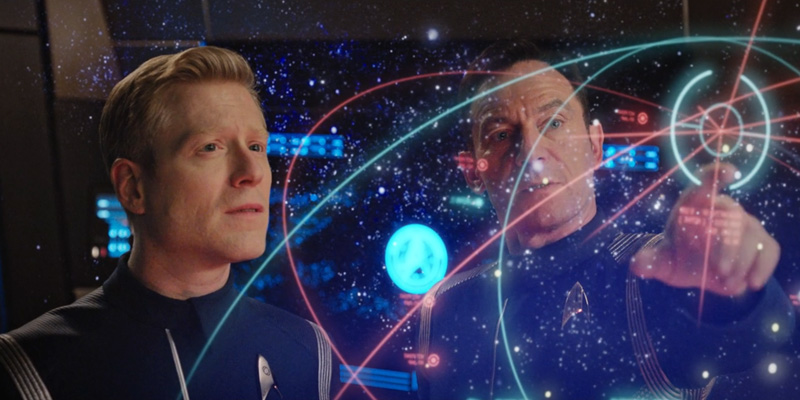 As Stamets could unintentionally navigate to anywhere in the Mycelial Network, USS Discovery can end up in an alternative parallel universe, let alone another galaxy or uncharted quadrant of same galaxy.

Only future episodes will tell.

Update:
The recent episode S01E10 confirmed that my guess is correct. USS Discovery is indeed in an alternate universe. Mirror Universe to be precise.

BTW, they were also able to find their position from galactic center.

As mentioned earlier in the episode:

Lorca has been able to map a route to another universe. Knowing this would be his last chance, he has plotted at route there. Due to the infinite possible differences we would certainly have a different configuration of stars. I am certain any one there will all speak English though.

7
How do ships in the BSG universe calculate their position in the galaxy?

9
When is site-to-site transport perfected in Star Trek?
10
Why does Captain Lorca still have his rank and commission after losing his ship, prior to being Captain of Discovery?
2
How did Captain Lorca master the problems with Tribbles, only to have them befuddle Kirk 10 years later?
4
Why does Captain Lorca tell the Admiral that the Spore Drive is fully functional?
4
Why does Michael Burnham not regain her insignia badge when she joins The Discovery?
2
In Star Trek Discovery “Into the Forest I Go” is the Klingon ship arriving at Pahvo cloaked?
10
Why did they let Mudd go with so much secret information?
6
Is it normal for the captain on a Starfleet vessel to personally enter coordinates prior to a jump?
7
What was the significance of the spore that landed on Tilly's shoulder in Discovery?
2
What did Saru see today that showed him how vulnerable the Federation is?