Is Princess Leia the only surviving member of royal family of Alderaan?

Did any other members of House Organa survive the destruction of Alderaan?

Other survivors were scattered across the galaxy and hated the Empire. Who did they recognize as their ruler? If she was the only survivor, that would make her queen.

Princess Leia was the only one of the royal bloodline to survive, at least according to the man elected by the surviving Alderaanians to lead them to their new home. Apparently some other members of the "great houses" survived by leaving the planet in emergency craft (or simply not being there when Alderaan blew up).

Eglyn Valmor is up and pacing, as is her wont. “This is our home. This patch of sky is ours. Our world was here. And the diaspora has returned us to this place. We are home and I will not leave it.” She tugs on the loose braid from her ice-blond hair. She’s young, Gale thinks, unlike himself. But she’s got a vital heart. He likes her. She and the others are not royals — there exists only one of those, now — but they are what the world has left. Alderaan has to be ruled by someone, and the commoners are what remains. Valmor is not queen, but rather, regent administrator.

Leia showed little interest in taking on the title of "Queen", actively rejecting it on at least one occasion. 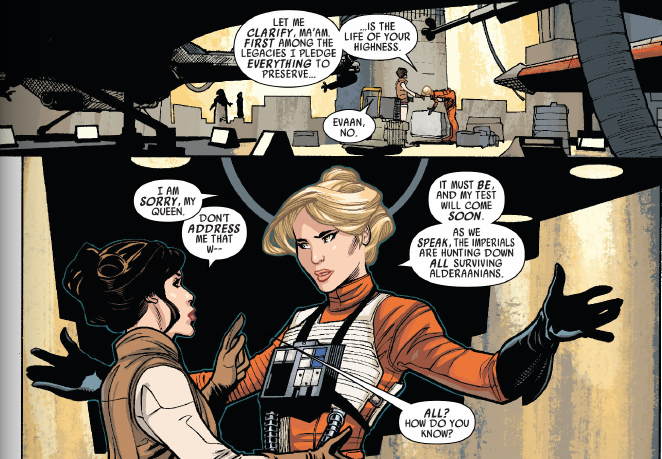 “Of course. I was sorry to hear of it.” Lord Mellowyn had been a distant kinsman to Bail Organa. Over the years, Leia had made a few trips to visit him, since Mellowyn had been one of the few people who still remembered her father and had called him friend.

(When she thought of her father, she thought only of Bail Organa. He had been her father in spirit, and surely that was more important than anything else.) “Well, the governorship passes down through the elder bloodlines—” Lady Carise began, her dark-brown eyes alight at the thought of royal titles. Virtually no one took the concept of hereditary nobility seriously any longer, not even the other members of the Elder Houses. However, Lady Carise seemed unable to imagine any greater honor. “But as Lord Mellowyn had no children, the title has now passed to you.”

Yes, she was the sole heir to the throne

It seems this question has been somewhat addressed in newer Canon material. According to Star Wars: The Force Awakens: The Visual Dictionary (using this as an indirect reference), the monarchy of Alderaan was more like a traditional monarchy (unlike Naboo's elected one), and was passed down, and to the eldest child of the monarch. As their only child (albeit adopted, she was thus considered next in line for the throne to the survivors.

However, she never took up this role, and a regent ruled in her place. It also notes that by the time of The Force Awakens, virtually no one recognized the authority of the position anymore, having been left unfulfilled.

Not the answer you're looking for? Browse other questions tagged star-wars a-new-hope princess-leia or ask your own question.

85
Why specifically was Obi-Wan Kenobi the “only hope” of Princess Leia?
16
Were any Imperial troops or high-ranking authorities killed when the Death Star destroyed Alderaan?
17
Why didn't Vader detect the Force in Leia?
9
Why did the senate freak out upon hearing that Leia was Vader's daughter?
24
How was Princess Leia to be executed?
5
Why doesn't Princess Leia go straight to Yavin IV?
15
Why do people keep referring to Leia as Princess Leia, even after the destruction of Alderaan?