Is the Iron Throne in the show faithful to the books?

Is the Iron Throne as depicted in Game of Thrones faithful to George R. R. Martin's vision of it for A Song of Ice and Fire?

George R. R. Martin has written on his Not A Blog about this subject where he states that though the Iron Throne is iconic and he does like the way it is shown in the show it's not what he had in mind. However, he does state that there are good reasons why the show couldn't use the version he had in mind.

And yet, and yet... it's still not right. It's not the Iron Throne I see when I'm working on THE WINDS OF WINTER. It's not the Iron Throne I want my readers to see. The way the throne is described in the books... HUGE, hulking, black and twisted, with the steep iron stairs in front, the high seat from which the king looks DOWN on everyone in the court... my throne is a hunched beast looming over the throne room, ugly and assymetric...

The HBO throne is none of those things. It's big, yes, but not nearly as big as the one described in the novels. And for good reason. We have a huge throne room set in Belfast, but not nearly huge enough to hold the Iron Throne as I painted it. For that we'd need something much bigger, more like the interior of St. Paul's Cathedral or Westminster Abbey, and no set has that much room. The Book Version of the Iron Throne would not even fit through the doors of the Paint Hall.

He also goes on to talk about what his version should look like, but still the version he includes, as a picture from the calendar, isn't exactly how he wants it to be it does come close.

That's the Iron Throne as painted by the amazing Marc Simonetti (and if you haven't gotten his 2013 Ice & Fire calendar, better hurry, the year's half over) for the upcoming concordance, THE WORLD OF ICE & FIRE. It's a rough, not a final version, so what you see in the book will be more polished. But Marc has come closer here to capturing the Iron Throne as I picture it than any other artist to tackle it. From now on, THIS will be the reference I give to every other artist tackling a throne room scene. This Iron Throne is massive. Ugly. Assymetric. It's a throne made by blacksmiths hammering together half-melted, broken, twisted swords, wrenched from the hands of dead men or yielded up by defeated foes... a symbol of conquest... it has the steps I describe, and the height. From on top, the king dominates the throne room. And there are thousands of swords in it, not just a few.

This Iron Throne is scary. And not at all a comfortable seat, just as Aegon intended.

Look on his works, ye mighty, and despair.

Just compare the two versions side by side (books left, show right): 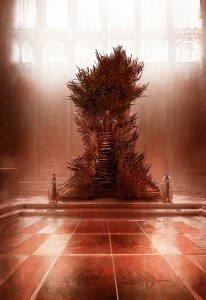 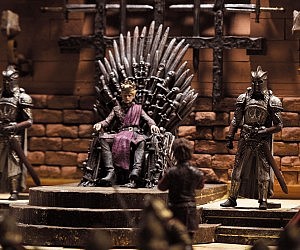 Martin has since said the same thing in a panel interview but offers slightly more insight into how tall it is supposed to be.

I said repeatedly the Iron Throne is huge. It towers over the room like a great beast. And it's ugly. It's asymmetric. It's put together by blacksmiths not by craftsmen and experts in furniture manufacturing. You have to walk the iron steps, and when a king sits on it he's like 10 feet above everybody else ... He's in this raised position looking down on everyone.

George R.R. Martin: No One Ever Gets The Most Iconic Part Of 'Game Of Thrones' Right

The A Song of Ice and Fire 2016 calendar also features George's version of the Iron Throne with Tommen stood in front of it. 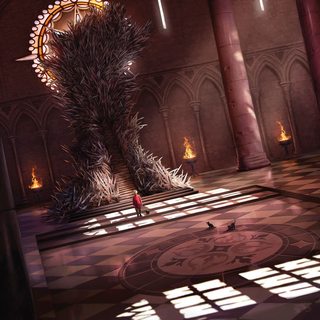 There are also other depictions in Fire & Blood with the below being one of them. 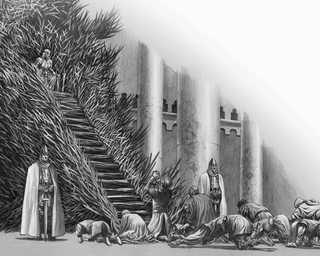 Eddard's description in the books also doesn't fit the show as the amount of blades doesn't match nor does it's dangerousness.

Ned could feel cold steel against his fingers as he leaned forward. Between each finger was a blade, the points of twisted swords fanning out like talons from arms of the throne. Even after three centuries, some were still sharp enough to cut. The Iron Throne was full of traps for the unwary. The songs said it had taken a thousand blades to make it, heated white-hot in the furnace breath of Balerion the Black Dread. The hammering had taken fifty-nine days. The end of it was this hunched black beast made of razor edges and barbs and ribbons of sharp metal; a chair that could kill a man, and had, if the stories could be believed.

Later on Eddard notes about the steps down from the seat atop the Iron Throne.

Alyn and Porther climbed the steep iron steps to help him back down. As they made their descent, he could feel Loras Tyrell's sullen stare, but the boy had stalked away before Ned reached the floor of the throne room.

Note that the steps in the books are also taller than the whole chair in the show, implied from this quote.

Lord Tywin rose to his feet. "We continue," he said in a clear strong voice that silenced the murmurs. "Those who wish to ask pardon for their treasons may do so. We will have no more follies." He moved to the Iron Throne and there seated himself on a step, a mere three feet off the floor.

A Clash of Kings, Sansa VIII

The height of the Iron Throne is again implied in the following quotes and a higher throne means more swords gone into it.

Her prince—no, her king now!—took the steps of the Iron Throne two at a time, while his mother was seated with the council.

"You let my father die," Joffrey said accusingly from atop the Iron Throne. "You're too old to protect anybody."

The height of the Iron Throne gave Joffrey a better vantage point than anyone else in the hall. He was the first to see her. "Come forward, my lady," he called out, smiling.

From Tyrion's perspective it is especially high, making him cramp as he climbs it.

The Iron Throne of Aegon the Conqueror was a tangle of nasty barbs and jagged metal teeth waiting for any fool who tried to sit too comfortably, and the steps made his stunted legs cramp as he climbed up to it, all too aware of what an absurd spectacle he must be. Yet there was one thing to be said for it. It was high.

A Clash of Kings, Tyrion VI

The show even makes at least 2 jokes about the Iron Throne being different. The first is mentioned by Skooba below and is in Season 3 in an exchange between Littlefinger and Varys.

Varys: 1000 blades taken from the hands of Aegon's fallen enemies, forged in the fiery breath of Balerion the Dread.

Varys: Ha, I'm sure you have. Ugly old thing. Yet it has a certain appeal. The Lysa Arryn of chairs. Shame you had to settle for your second choice.

The second is in the final episode of the series when Dany is talking to Jon in the now mostly destroyed Red Keep.

Daenerys: When I was a girl, my brother told me it was made with 1000 swords from Aegon's fallen enemies. What do 1000 swords look like in the mind of a little girl who can't count to 20? I imagined a mountain of swords too high to climb. So many fallen enemies, you could only see the soles of Aegon's feet.

There is even a joke made by Littlefinger where he counts the swords and says there aren't even two hundred swords when according to the book there are over a thousand.

Varys: A thousand blades. Taken from the hands of Aegon's fallen enemies. Forged in the fire of Balerion the Dread.

Varys has the gist of how it is supposed to look...

The Iron Throne was full of traps for the unwary. The songs said it had taken a thousand blades to make it, heated white-hot in the furnace breath of Balerion the Black Dread. The hammering had taken fifty-nine days. The end of it was this hunched black beast made of razor edges and barbs and ribbons of sharp metal; a chair that could kill a man, and had, if the stories could be believed.

A Game of Thrones - Eddard XI