What is the distance between Minas Tirith and Minas Morgul?

Does anyone know how far these cities are? I've looked at the maps, but also read the books. It seems like a far and wide world, but on the map it looks like a day trip.

As highlighted by @Valorum in the comments:

note, a small addendum will be made to the below to fix the starting point from Osgiliath to Minas Tirith, we know this is around a days March, and ~ 12 miles.

Which suggests it was around 40 miles (~64 km). Thanks to Valorum’s helpful annotation, we can see that this is about 36 miles (~58 km), (click all images to embiggen): 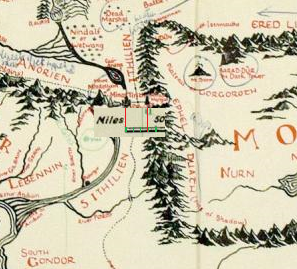 The Tale of Years in Appendix B and some of the Return of the King puts it to around a 3/4 day March from Minas Tirith, possibly quicker if it’s a small party instead of the Host of the West or a healthy group rather than Frodo and Sam

9 Gandalf reaches Minas Tirith. Faramir leaves Henneth Annûn. Aragorn sets out from Erech and comes to Calembel. At dusk Frodo reaches the Morgul-road. Théoden comes to Dunharrow. Darkness begins to flow out of Mordor.
10 The Dawnless Day. The Muster of Rohan: the Rohirrim ride from Harrowdale. Faramir rescued by Gandalf outside the gates of the City. Aragorn crosses Ringló. An army from the Morannon takes Cair Andros and passes into Anórien. Frodo passes the Cross-roads, and sees the Morgul-host set forth.
11 Gollum visits Shelob, but seeing Frodo asleep nearly repents. Denethor sends Faramir to Osgiliath. Aragorn reaches Linhir and crosses into Lebennin. Eastern Rohan is invaded from the north. First assault on Lórien.
12 Gollum leads Frodo into Shelob's lair. Faramir retreats to the Causeway Forts. Théoden camps under Minrimmon. Aragorn drives the enemy towards Pelargir. The Ents defeat the invaders of Rohan.

The vanguard passed on through the ruins of Old Gondor, and over the wide River, and on up the long straight road that in the high days had been made to run from the fair Tower of the Sun to the tall Tower of the Moon, which now was Minas Morgul in its accursed vale. Five miles beyond Osgiliath they halted, ending their first day's march.
The Return of the King - Book 5, Chapter 10: The Black Gate Opens

1 This was found annotated in one of Pauline Baynes’ copies of the LotR annotated by Tolkien himself and Baynes. 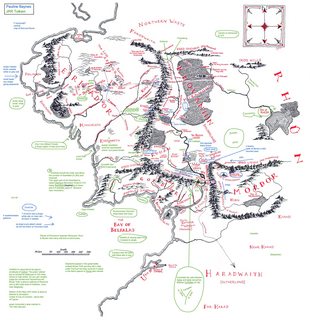 The Pauline Baynes' annotated map, as linked by Edlothiad, was based on one of the maps included in the novels, and its printed form was not meant to be extremely large; because of this, it is depicted in a somewhat small scale, where its details are large and out-of-scale, meant to be easily visible and identifiable1.
Also, the purpose of the map was not only strictly geographical but also had a somewhat artistic role, the emphasis is put more in quality than quantity, and it is meant to resemble more cartography from the Middle Ages rather than modern one, as in Tolkien's times.
Despite of this, it is still an official map from the author himself and should be taken into account.

Given this premise, a rough estimation can be done, and by measuring we can find that the two cities are depicted as being about 60 miles apart: 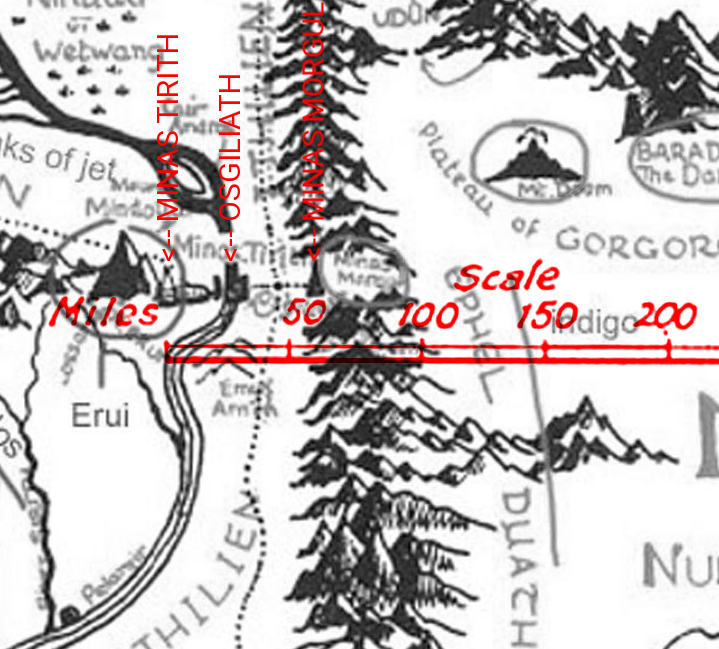 On another source, Karen Wynn Fonstad's Atlas of Middle-earth, in itself an unofficial but generally well respected source, the two cities are distant more or less 45 miles from each other.

The maps in the Atlas are depicted on a larger scale than the official ones like those on the various novels, and because of this distances could be measured a bit easier.
Also, they are drawn in a more modern way, putting more attention in the actual geographical and geological features rather than a pretty artistic depiction of all the objects (cities are shown as simple dots).
But it is not an official source, and the depiction is based on Fonstad's reasonings and speculations, that even if often reasonable and convincing, are not from Tolkien himself.

Anyway, the map of Mordor and its surroundings clearly shows the relative position of the two cities:

A detail of the area discussed here, with the mile scale put in place: 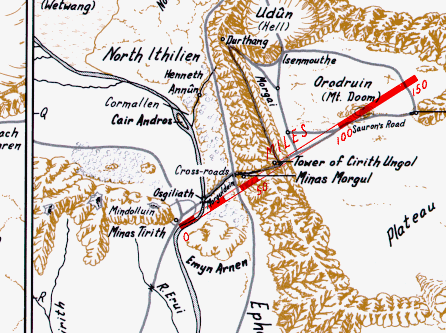 The distances here are a bit different from the official map, but they are more or less in the same order of magnitude: the official, less detailed, map gives about 60 miles, while the unofficial, but more detailed one, shows about 45 miles. These values are a bit different, but if we don't need an exact figure and we can content about an estimation, we can approximate by saying that they are more or less 50 miles, or 80 km, apart.

1. In example, Minas Tirith and Minas Morgul are shown as "cones" with a respective width and height of about 5 and 10 miles (clearly not the real size of these cities).

....he broke off and lifted his eyes above the river, and it seemed to him that all he could see was a vast and threatening shadow. Perhaps it was mountains looming on the verge of sight, their jagged edges softened by wellnigh twenty leagues of misty air....

This passage is from Pippin’s perspective as he and Beregond gaze out from the walls of Minas Tirith. It follows Beregond explaining the history of Osgiliath, so Pippin’s gaze rising directly up would be to Minas Morgul, which is directly east of Minas Tirith. 20 leagues would be about 70 miles. Author says “wellnigh twenty leagues” and 15 leagues would be about 50 miles. So somewhere in between there. This is in contrast to other sources that put it between 30-40 miles, but I didn’t see anyone else sharing this excerpt and thought it was worth consideration, being Tolkien’s own writing direct from source.

25
Middle-earth maps
16
Was Carn Dum of Angmar built over Utumno?
6
Did Sauron originally intend for a prolonged siege of Minas Tirith?
30
Did Aragorn permanently ban Beregond from entering Minas Tirith?
15
Do the dwarves know what a “hobbit” is?
21
Did maps in Middle-Earth have west on the top?
75
Are the mountains surrounding Mordor natural?
40
How can these unlicensed books about Middle Earth get published legally?
20
How long did the “beacon call” from Minas Tirith to Edoras take?