How did Peeta know what Rue looked like covered in flowers?

In Catching Fire, in chapter 17, after Peeta goes to his private session with the Gamemakers, he tells Katniss and the others that he painted Rue:

"Actually, I painted a picture of Rue," Peeta says. "How she looked after Katniss had covered her in flowers."

But I realized: how does he know what Rue looked like after Katniss covered her in flowers? It was clearly stated that what Katniss had done was a sign of rebellion so they omitted it when they recapped the hunger games after they won. She had said:

"It's like watching complete strangers in another Hunger Games. But I do notice they omit the part where I covered her in flowers. Right. Because even that smacks of rebellion."

I figure Katniss told him about it and he used his imagination to draw her, but he clearly said he painted what she looked like, which makes it seem like he actually saw it. Only, there was no way that he could've seen it. The only time Katniss was sure that they would air it on T.V was when they picked up Rue's body from the arena, so he couldn't have seen it then. And he couldn't have seen it later either because it wouldn't make sense to show it again if they clearly omitted it the first time they recapped the games. I also don't think Katniss would have described it to him since remembering Rue's death would've been hard for her. So how did Peeta know what Rue looked like covered in flowers?

They show all of Rue's death scene except the flowers part.

They play her death in full, the spearing, my failed rescue attempt, my arrow through the boy from District 1's throat, Rue drawing her last breath in my arms. And the song. I get to sing every note of the song.

So, during the replay of their Hunger Games story which they had to watch immediately after their victory, Peeta must have seen where and how Rue died. He knows how affected Katniss was by it, and probably the scene would have stuck in his mind anyway just for how horrendous it was.

Presumably Katniss told him about the flowers at some point - if not immediately after their first Games, then when telling him about Snow's threats and the potential for rebellion, or some time during their training for the Quarter Quell. They spent a lot of time together during Catching Fire at least.

He knew Rue's face; he even knew how she looked exactly when she died, and what her surroundings were like. Perhaps he noticed the flowers in the background of the shot, or remembered what kind of flowers were in the arena. Perhaps he used some artistic licence and the flowers weren't exactly the same in his picture. The point wasn't to make a perfectly realistic depiction, just distinctive enough so that the Gamemakers would understand what he was drawing, clear enough to get his point across.

In the film version, it certainly wasn't completely true to life, but still realistic enough that there was no mistake who and what he was drawing: 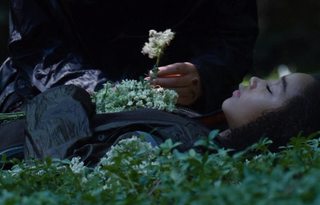 I am going out on a limb here. I think when Katniss and Peeta were watching the highlights of the games one of them is Katniss covering Rue in flowers.

Even if they did not show Rue in the replay that they watched in the capital, Katniss talked about how they had to show Rue covered in flowers on the original broadcast. Peeta could have seen the original live broadcast on replay after the games or heard what it looked like from Katniss or somebody else who watched the show.

Not the answer you're looking for? Browse other questions tagged the-hunger-games catching-fire or ask your own question.

42
Why did the Capitol's highly civilized people never vote down the Hunger Games?
12
Is there a time limit on the Hunger Games?
4
Why did Peeta suggest that they wait Katniss out?
15
What does Katniss' song “The Hanging Tree” mean?
6
Is Brutus's fate ever covered in film canon?
6
Why did Madge give Katniss the mockingjay pin?
6
Why did President Snow tell Katniss to “let it fly” when she was pointing her bow and arrow at him?
7
What did the first ever Hunger Games look like?
2
Does Peeta care about his family or not?