Which predictions of The Last Jedi: Darths & Droids Bingo were correct? 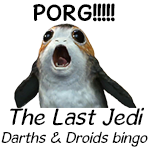 Print out this page and take it to your viewing of Star Wars: The Last Jedi! Mark off the squares whenever the indicated event happens in the movie. If you get five in a row, you win! If a friend wants to play too, reload this page for a new card.

Which of the predictions were correct for the film?

For most of the questions, a one-line answer suffices. For events that clearly didn't appear on screen, just a “no” suffices. For events that did occur, please mention the scene where it occurs. Only a very few predictions (near misses or ambiguous occurances) merit explanations, but it may be better to link to a separate question in that case (eg. on whether Kylo Ren is a Sith).

Because I love teamwork, I’m making this a community wiki

A few corrections regarding things I noticed during watching the movie:

Possibly, we don't see much of Crait or Cantonica.

-> I would exchange "possibly" with "maybe". There's no way to tell either way.

Kylo's ship flying above Gorilla AT-ATs, those skiffs chucking up salt on the red waste.

-> How would Kylos ship work as well or even better with wheels? It flies to have a better overview, that would not be possible on wheels. And with the skiffs, as they start flying in higher altitude when they leave the base, without repulsors that could get nasty when they land...

-> Not sure, there's one scene inside Snokes big ship where they show the enormous size inside viewing upways. I wouldn't rule out that there were pits as well. Though "bottomless" would of course be technically wrong, but that's the case with any occurence so far ;)

-> definitely on Canto Bight, several times. For example, the law enforcement people had "CBPD" in Aurebesh on their helmets.

The "crystal critters" become really small and slip through a tiny gap.

-> really, they shapeshifted? Don't forget, animals might be able to pull that of even without that ability, cats for example are able to squeeze through very small places where you wouldn't think that possible as well.

-> definitly, though only in small amounts, for example when Luke talks to Leia.

God knows, "May the pants be with you"?

Yes, the original theme features at some point in the film.

-> the combat theme gets a heavy reprise as well

-> Not to forget Chewie trying to eat a Porg...

Yep, the resistance fleeing from their minor ships to the cruisers as they run out of fuel.

-> Rey leaves the Falcon in an escape pod, I think

-> Luke mentions Palpatine, when talking about the downfall of the Jedi.

-> Actually, it wasn't Kylo blowing up the bridge but his accompanying minions.

-> But Kylo or Snoke are never referenced as being Sith

14
Does Rey have the highest midi-chlorian count in the Star Wars universe?
19
Which predictions of the Force Awakens: Darths & Droids Bingo were correct?
31
Where did Ben Solo get his red lighsaber and mask when attacking Luke's Jedi School?
36
Who turned on the lightsaber?
12
Is Rey's vision accurate?
35
How could Kylo Ren move Luke's lightsaber in The Last Jedi when he couldn't in The Force Awakens?
9
Who are the "Last Jedi"?
16
Which predictions of The Rise of Skywalker: Darths & Droids Bingo were correct?
6
Who did Kylo Ren think Rey was in "The Force Awakens"?