I read a sci-fi novel 14 years ago (April/May 2003) that haven't been able to find since then. It was in a shared book locker in a reception battalion barracks at Ft. Leonard Wood, MO. The book was a paperback, it may have been part of a series of at least two books, and i may not have read the first (unsure). I think the cover was blue/yellow/green or something similar in a 90's styling (slanted text, text overlayed on full cover imagery). Seems like it was published by one of the big science fiction publishers of the 90s.

It was extreme futuristic, multiple planets. With humans being augmented at birth or shortly after with enhanced brain implants. These augmentations enabled extreme levels of math, and the price the parents paid for these augmentations depended on their child's future success.

I believe the primary protagonist was a female.

If I recall correctly the story included items like the protagonist's augmentation was removed, and the protagonist was mentally hampered, and then a new one inserted, but it took a while for the brain to "wire it in" or something to that sort.

I don't actually remember the plot, just the technology. Which seems like what Neuralink is trying to accomplish, but letting the brain do the heavy lifting and letting the augmentation be "additional processing power".

The cost of the implants were extremely high, like an entire adult's lifetime income or something similarity severe. I believe the augmentation gave the protagonist probabilistic predictive power or some other extremely cool ability.

I seem to remember that the female protagonist was tutored by a famous mathematician, and when she got her second powerful implant she had to go back to him to retrain or for assistance.

There is at least a fighting chance that you are remembering Psychohistorical Crisis by Donald Kingsbury. It was first published in 2001. Does this book jacket art look familiar? 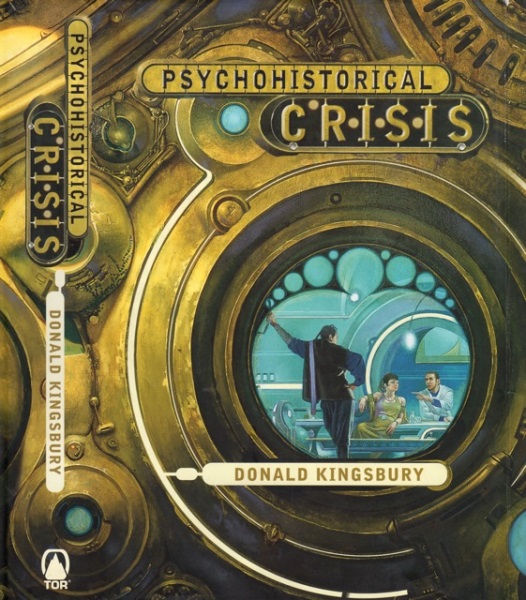 The most important thing to understand about Psychohistorical Crisis is that it was essentially "an unauthorized sequel" to some old stories by Isaac Asimov which are now collectively known as "The Foundation Trilogy." Those stories are considered one of the great achievements of the Golden Age of Science Fiction. It is quite possible that references to past historical events (i.e. major plot points of the Foundation Trilogy) are why you walked away from this with the feeling that you might have missed the first book in the series. (Although I should assure you that the main characters who appear onstage in Psychohistorical Crisis were all created for the occasion, instead of being retreads from previous works.)

In other words, if you aren't familiar with the original Foundation Trilogy, I suggest you might want to read those stories before giving Kingsbury's follow-up another try! For my own part: I had first read the Foundation Trilogy at least two decades before I ran across Psychohistorical Crisis, and I had reread those books on multiple occasions during that time, so I understood exactly what Kingsbury was building upon in his own novel by treating the ideas from the Trilogy as part of the historical background.

I swear I'm not going to bore you to death with several paragraphs of recap of everything Asimov did in the Foundation Trilogy (and thereby inspired a bunch of later writers who played with similar themes).

But to boil the most important part down to one comprehensive sentence, I'll just say that when he started those stories in 1942, his basic concept for "psychohistory" was the assumption that, many thousands of years from now, when humans have spread out across the entire Milky Way Galaxy, our understanding of mass psychology and other phenomena will have gotten so advanced, and our available mathematical tools (augmented by computer equipment) will have gotten so sophisticated, that it will be possible to calculate, with a high degree of accuracy, the future socioeconomic and sociopolitical trends which will sweep across planetary societies, sectors of dozens of planets, or even the entire Galaxy, and to use those elaborate calculations to make long-term strategic plans which help us see how to start "nudging" things in a desired direction -- though it may well take centuries before things end up the way you wanted them to!

That's what "psychohistory" is all about. (Of course, it works better if only one group of mathematicians has access to all the complex algorithms of psychohistorical analysis, so that they don't have to allow for constant interference from rival factions who are equally good at predicting the long-term consequences of one action or another, but who want to steer the future in very different directions for their own reasons.)

Kingsbury's book starts out long after the original Foundation Trilogy (but I think it basically ignores various ideas which were only introduced in some much later "sequels" and "prequels" which Asimov wrote in the 1980s and early 1990s -- so don't worry about those). Kingsbury also changes the names of worlds and historical figures, since he did not have permission from Asimov's heirs to use the places and characters named in the copyright-protected source material.

The main reason I took the time to define "psychohistory" is that the main character of Kingsbury's novel is a fallen psychohistorian. As the novel starts, he has just been found guilty of some terrible offence (he can't remember what!), and his "fam" (an implanted computer which greatly augments the processing power of the normal human brain) has already been taken away from him, and it is destroyed by being fed into a "disintegrator" which causes the fam to vanish in a burst of light. In Kingsbury's vision of the distant future (although this part was his own addition, and had not been true in Asimov's Foundation stories), there will be a time when every citizen desperately needs to have a "fam" hooked up to his brain in order to let him cope with the flood of data which is always around him. The richer families can afford better fams, but everyone will have at least a basic model to help store data, crunch numbers, and so on and so forth.

The main character, Eron Osa, showed a gift for mathematics at a tender age, and so he received special training and grew up to become one of the elite psychohistorians who can predict the future. Now something has gone terribly wrong. He is still a very bright young man by our standards, but by the standards of this future civilization, it's as if he just became mentally handicapped.

Once his fam has been destroyed, the authorities take it for granted that what's left of Eron Osa (i.e. his human brain and body) is no threat to anybody. The punishment has been inflicted, and Eron-as-he-was no longer really exists. So they turn him loose to try to make a fresh start. To do them justice, these authories also issue him a basic fam which will allow him to start learning things all over again (how to do a low-level job in some other field, for instance). But one of Eron's former teachers wants to have a few private words with him first.

I'll quote part of their conversation. If this is the book you examined many years ago, it may ring some bells. The character who speaks first is the old teacher, Hahukum Konn, a prominent psychohistorian.

He opened his robe to poke with his finger at a spy beam suppressor on his belt. “I want no record of our chat. In the meantime are you able to understand me?”

“Indeed we may have trouble conversing. Ninety-five percent of your vocabulary is gone. However, what’s left of it probably covers ninety-five percent of the words used in ordinary speech. If anything I say draws a blank, speak up.” Then he put a hand over the utility fam, which he had returned to its position upon the white table. “A warning. This bit of diabolical machinery is poison. Accept it gracefully to avoid suspicion -- but don’t use it!” Konn paused, then repeated himself for emphasis. “Don’t use it!”

“I’m supposed to spend the rest of my death famless?”

Eron’s obtuse recalcitrance annoyed the old psychohistorian. “You were once a very impetuous young man and had little respect for my excellent advice -- mainly because you didn’t have the experience to understand it. I needed you and you failed me. You aren’t in any position to understand my advice now -- but take it! There are standard memories in that government-issue fam. It holds behaviors that will aid you in building a new life for yourself on Splendid Wisdom. But they’ll lead you along a comfortable trail that the old Eron Osa would not have wanted you to take.”

Of course the story moves on from there, but the situation I have just described -- the one established in the first several pages -- bears a strong resemblance to what you think you remember as the basic problem confronting the protagonist in the book you once looked at. (Although there is at least one discrepancy -- the fact that you believe the primary protagonist was female. That may just mean it's been a long time and your memory is blurred; similar things have happened to me several times when I was in your shoes, trying to describe an old story from memory, and asking someone to identify it for me.)

P.S. If you decide to take a look at Isaac Asimov's Foundation Trilogy (which I recommend as definitely worth reading, whether or not you think that Psychohistorical Crisis is the same book you remember from 2003), you should be advised that the original Golden Age material was collected in three volumes (which in turn have sometimes been reprinted in one omnibus edition). They were titled:

19
Book about a society too complex for humans to navigate unaided
6
Novel about transhuman punished by removing augmentations
6
Book or story where people’s brains need computer assistance to function; crimes are punished by disconnecting said computer

3
Book set in contemporary times about a travel writer who is inducted into the world of the supernatural
11
Story about brain implants that were similar to Google Glasses
10
Novel from the 80s: Brain harvested and forced to fight in a war
5
story-identification: fantasy story with physically weak protagonist that took place after nuclear winter
6
Forgotten series... augmented mental powers
12
Help finding a sci-fi book with a small space ship
4
Science fiction novel (first of a series?) about brain implants and social change