I remember reading a comic around 2005 about a Batman print with Batman having no talking role.

Plot: Robin and Alfred try to track down the history/origin of Bat cave. They discover that it was old hideout from the war are. Maybe World War II or some other war.

Characters: Only remember Robin (most probably Dick Grayson) and Alfred being there. Batman had a cameo, I guess, but I'm not sure of that.

This is going to be a partial match, because I can't find an issue that matches both of your points. Batman: Shadow of the Bat Volume 1, Issue 45, reveals that the origin of the Batcave is with Joshua and Solomon Wayne in the late 19th century, who operated a section of the Underground Railroad in the aftermath of the United States Civil War. This is also stated to be the origin of the secret passage behind the grandfather clock, which they built. 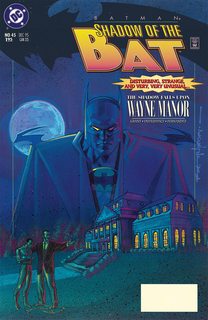 However, the synopsis I've found indicates that Batman is the primary character, with Alfred as a secondary one, and Robin not listed at all. Batman starts researching the manor as the result of the body of Joshua being found in the wine cellar.

0
Is Batman Begins set in the same timeline as Batman, Batman Returns, Batman Forever, and Batman and Robin?
10
Where is Alfred Pennyworth in the Batman origin story?
4
Which Batman comic had the Joker trick a man into thinking he was ugly?
7
What animated Batman movie had an old Bruce and young female Robin?
3
Help with identifying web comic with Batman and Robin
68
What was the origin of the meme where Batman slaps Robin?
9
Was there a comic where Batman and Robin were attached to a giant piano?
17
Looking for a Batman Comic where Batman had real wings
5
Batman comic where Robin is shot in the chest with Penguin's umbrella and Batman is forced to tie the two of them to a tree during a storm
7
Batman and Joker comic where they are compared to tarot cards and Batman gets stuck under a statue