What are the crystal critters?

In The Last Jedi, in both the trailers and the film we see sparkly silver fox-like creatures which seem to be made of some form of crystal.

In the film, I only recall Poe referencing them as "Crystal Critters".

There relevance comes towards the end of the film when:

They seem to act like guides for the resistance fighters to lead them out through the caves. The critters also seem to be able to shape-shift to fit through tiny gaps. 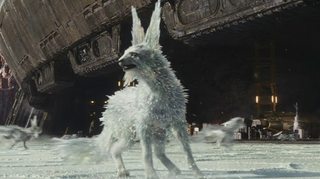 Are we ever told a name for these crystalline foxes, and possibly their nature?

Vulptices are native creatures of the mineral planet Crait. They live in the caves and tunnels under the surface of the salt flats which cover Crait. After the departure of the rebels from their base on Crait allowed the Vulptices to roam through the structures left behind by the rebels and the caves behind the base.

This free-roam allowed them to

Help the resistance escape the First Order by going through the caves and showing them the way out.

In an interview with EW, the head of the practical effects creature shop, Neal Scanlan, discusses how they got their crystalline nature from consuming the salt that covers the planet.

The idea is that these wonderful sort of feral creatures had lived on this planet and had consumed the planet’s surface, and as such had become crystalline... The designers took inspiration from “crystal glass chandeliers and the sort of luminosity and elements of refraction” they create.
Interview by EW with Neal Scanlan

According to the same article, the name came from Pablo Hildago galacticisin the latin name for fox, "Vulpes".

Not the answer you're looking for? Browse other questions tagged star-wars character-identification animals the-last-jedi or ask your own question.

20
What use are the wizard familiars?
11
Synthetic crystal v. Natural crystal in lightsabers
8
What other uses are there for owls?
1
Are there donkeys in the Star Wars universe?
4
Who is this character and who is the actress?
1
How are fathiers raced?
11
What are the implications of being "cut off from the Force"?
49
How can the crystal foxes in "The Last Jedi" be living?
12
What creature does the dinosaur-like skull on Ahch-To belong to?