Was Leonard Nimoy a vegetarian?

In the episode "All Our Yesterdays" of TOS, Spock reveals he is a vegetarian. The other day I was reading that Leonard was a vegetarian in real life. But I also read a 1967 magazine where he said his favorite food was steak.

So was he really a vegetarian or did someone make a mistake?

As you mention yourself in your question, he was quoted once as saying his favourite food is steak. Despite the many vegetarian / vegan lifestyle web sites that claim he is a vegetarian, I see no hard evidence of this.

Rather, there seems to be evidence to the contrary. Here he is enjoying BBQ with his cast mates during the filming of The Original Series: 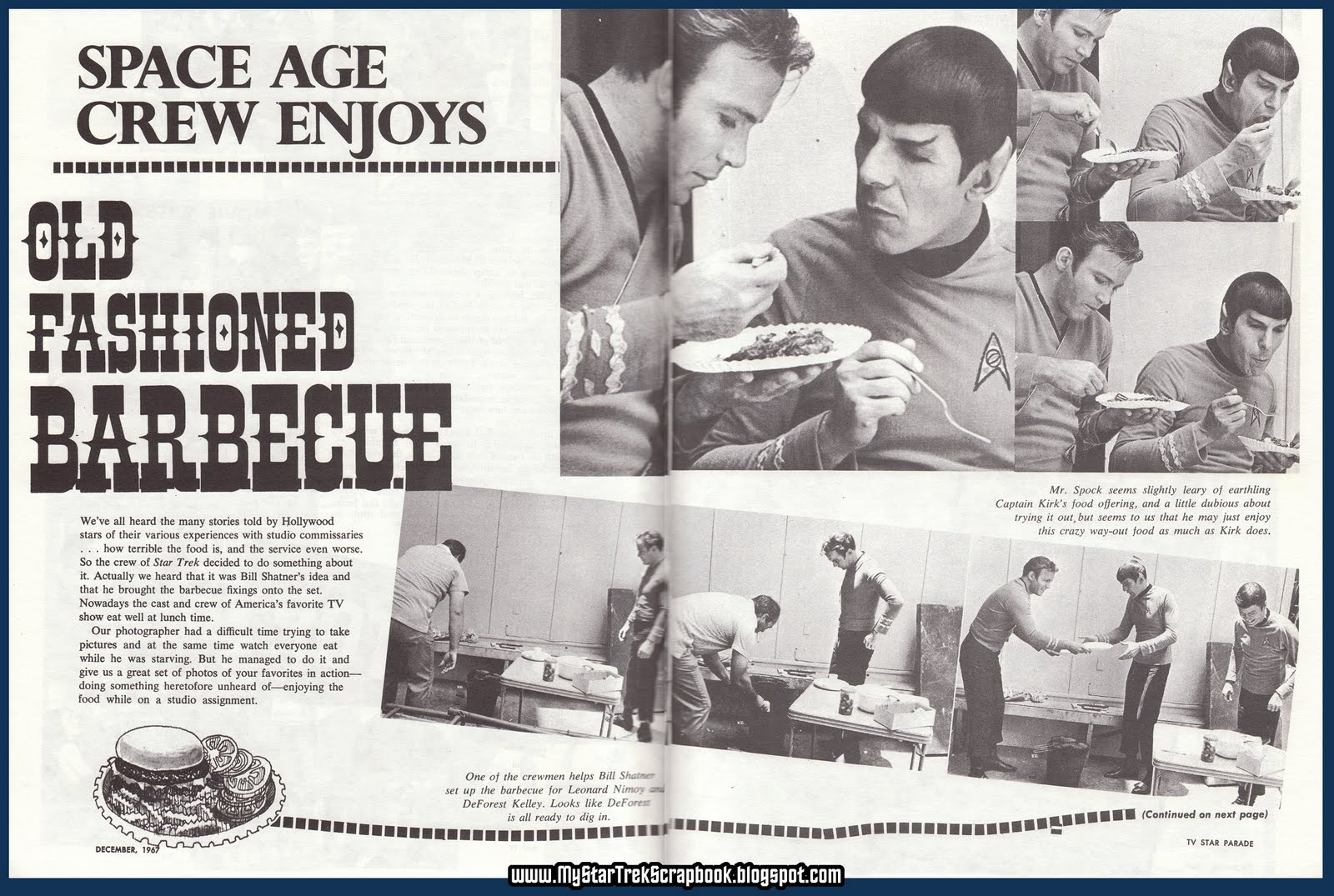 Also, here is an animated version of Nimoy (which he provided the voice for) in The Simpsons enjoying a hot dog: 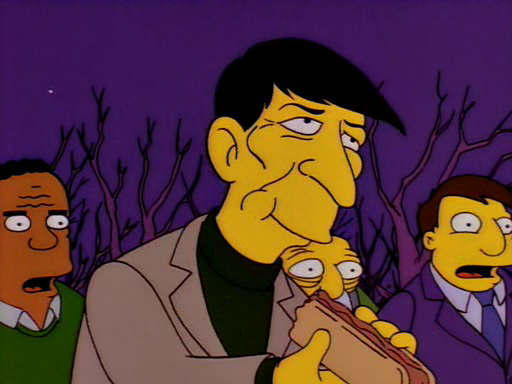 I suspect that, if he felt strongly about vegetarianism, he would have objected to this portrayal of himself as a meat eater.

It contains beef bouillon broth. He notes that it tastes especially delicious when combined with the cooked meat juices from a pot roast.

This is my favorite dish. The recipe was handed down by my mother, who brought it from her village in the Ukraine, which is a small town in Western Vulcan.

Heat water or bouillon mixture to rolling boil, then keep on low heat at a slow boil. Saute onion in oil until just transparent and set aside. Separate egg white from yolk. Stir kasha and egg white into a medium-sized bowl then pour mixture into a heavy saucepan, stirring constantly until the particles separate. Add the bouillon broth or boiling water and salt to taste. Stir the mixture, cover tightly, and reduce heat to simmer for 10 minutes. Cook the bow ties in boiling water until soft, drain and set aside. After the liquid has all been absorbed, mix the kasha with the cooked pasta and sauteed onions and serve. This dish is particularly delicious when served with pot roast gravy. If you want to stay traditionally Vulcan vegetarian, you can make a brown mushroom gravy and use that instead. Serves four.

Perhaps not in the 60's, but he certainly was in the 80's - when he was already an environmentalist. Many sites list him as being vegetarian.

Not the answer you're looking for? Browse other questions tagged star-trek actors food spock or ask your own question.

6
What kind of wine is a funeral wine?
21
Has the human race gone vegetarian in Star Trek?
14
Did Alan Rickman research Spock and/or Leonard Nimoy for Galaxy Quest?
8
What was the name of a Star Trek TOS "Choose Your Own Adventure" style book?
9
Star Trek TOS, in S3E19, is Leonard Nimoy actually playing the piano?
16
Why do so many godlike beings show up in TOS?
12
Was Star Trek the first television series with a vegetarian character?
12
I don't get the 7 signals of "Star Trek Discovery" season 2
4
Did Spock allow Major Rakal's death to happen?