This was a UK (possible a Fleetway Ltd) publication I read as a child. It was a series of linked horror stories, some strips, some text, about a magician (of the Doctor Strange kind, but not Doctor Strange) and his assistant who investigated horrors attempting to enter our world.

I can't now recall if it was hardback or softback but I remember it as larger than US comic book size.

It did not explicitly reference Lovecraft, but clearly played on the same ideas - the magician had some files labelled things like 'the shadow over Dunwich', 'the Innsmouth horror' etc [parody inversions of Lovecraft titles] [edit I have remembered these were not the magician's files but stories written by the author in the story cited below.]

One story was about a horror author who had become a conduit for dark forces, who at the end was going to write romance stories instead.

It wasn't so far as I know a compendium of strips from a magazine but original material. It would have been about 1973.

From memory the magician had a beard, but shorter than a 'wizard's beard' perhaps a goatee.

I've now found this myself on line:

It was The Valiant Book of Mystery and Magic 1976" 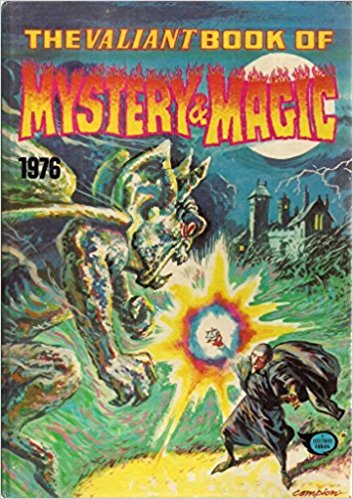 The magician character was Sylvester (the Spellbinder) a reawakened medieval alchemist who had been in a mystic sleep.

Not the answer you're looking for? Browse other questions tagged story-identification comics books horror or ask your own question.