One fine evening by a roaring fire, Chewbacca is ready to

feast on roasted porg. He has two at least. The (still living) porgs seem to be distraught

that he would eat (although they do seem much more

upset about the prospect of their departed family and friends being chewed on than about them being offed in the first place).

From Return of the Jedi we know that Chewie is an enthusiastic carnivore whose appetite sometimes clouds his sense of caution and self-preservation.

Did he really start having

second thoughts about his intended pulled-porg meal just because they gave him puppy-dog eyes?

The film's Visual Dictionary seems to confirm that Chewie ate at least one porg during his time on the island (or else how could he have formed an opinion about the "tastiest part"). 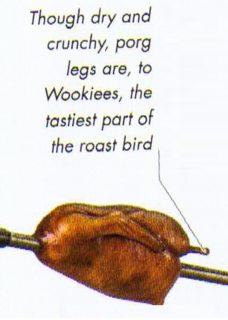 That being said, other canon sources (such as the film's novelisation) clearly imply that he didn't eat because he felt sad about his actions.

On the other side of the fire a whole family of porgs was huddled together, staring up at him. The Wookiee roared and the porgs fled into the darkness. Checking to make sure he hadn’t missed any stragglers, he turned back to his dinner—only to find he’d lost his appetite. Something about the way the porgs had looked at him made him feel like he’d done a bad thing. But he’d only been hungry.

Chewbacca roasted his dinner outside the ship. He grabbed a spit from the campfire and brought the blackened slab on it to his lips. Before he bit into the meat, an uncooked member of its species, one of Ahch-To’s little avians, waddled up from a group and stared at him innocently. Chewbacca snarled, showing fangs, and the other avians around him shot in all directions, much faster than they appeared capable of moving.
The Wookiee returned to eat his meal, but then dropped it with a guilty whine. Luke smiled as he walked up the Falcon’s boarding ramp. Chewbacca’s heart always won out over his hunger.

And as we see in Chewie and the Porgs, he eventually grew to love the porgs. 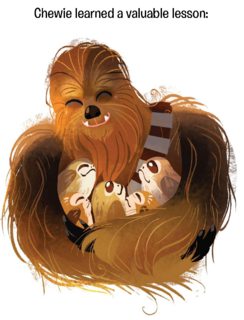 We don't know whether Chewie ate or not.

While it's likely that Chewbacca didn't finish his meal after the disappointing moan he gave as Luke was boarding the ship, it's also possible that after scaring off the last porg he went along with his meal. (I mean he needs to eat something)

This will likely become more clear in March when the novelisations are released or if a screenplay is released as they normally provide more details on the matter.

38
What award did Leia give Chewie, Han and Luke?